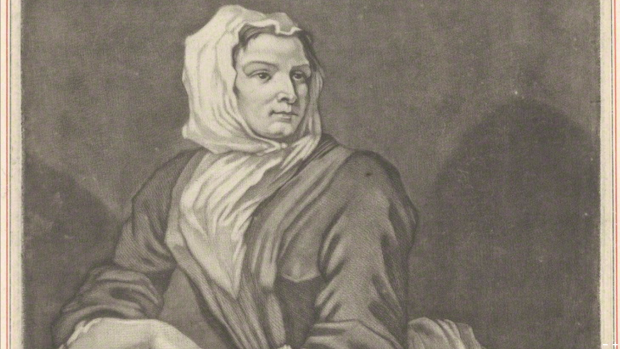 It is difficult to maintain objectivity when viewing Hogarth’s 1733 mezzotint of the infamous murderer Sarah Malcolm. Malcolm was responsible for the deaths of eighty-four-year-old Lydia Duncomb, sixty-year-old Elize Harrison, and twenty-two-year old Anne Price. I know this from the information plaque on the wall – the small inscription at the bottom of the sketch – and the smartphone that currently rests in my hand. What a wonderful thing technology is.

So it is with a tainted perspective that I gaze at the portrait, my eyes interminably drawn to Malcolm’s thin, vinegary lips, arched eyebrows, and sharp nose and cheekbones. The painstakingly detailed face rests atop a pair of broad shoulders and a highly-accentuated chest, the whiteness of which is so at variance with the tenebrous backdrop of the prison, it juts out at the viewer like a swelling balloon. It is an apt illustration of the murderer’s apparent shame and villainous pride…

But is it possible that I see all this because I know that Sarah Malcolm is a murderer? I look at her and I see the ‘Lady Macbeth’ that John Ireland professes to see when viewing the portrait. I see the female villain whose trial in the eighteenth century became a sensation as the English public grew eager to glimpse the face of evil for themselves. It is a small wonder that copies of William Hogarth’s 1733 print, priced at sixpence each, sold like proverbial hotcakes, devoured by an audience hungry for details of horror and intrigue.

I try to clear my mind of such thoughts when I look at the portrait a third time. Instead of looking for the villain, I look for a woman. I quickly realise that Hogarth presents Malcolm as an essentially feminine figure – one who is, in many respects, quite ordinary: a few untidy tufts of hair peep out of the headscarf that frames her face, her right forearm rests idly on her left, and her fingers curl naturally on the table. In truth, there is nothing remarkable about her appearance, yet there is something about the sketch that captures my imagination.

Sarah Malcolm protested her innocence until the end – and by ‘end’, I mean her execution. Hogarth’s drew this sketch a few days before her death. While Malcolm confessed to robbery, she maintained that her accomplices had carried out the actual murder while she had remained on look-out; she had not once stepped foot in Lydia Duncomb’s chambers. Whatever the circumstances, the bodies of the three victims were found the following afternoon, and when blood was discovered on Sarah Malcolm’s clothing she was arrested and taken to court. During her trial Malcolm claimed that the blood on her clothing was a result of menstruation – not murder. This did little to help her case; menstruation was a taboo subject in the eighteenth century and the mention of it only strengthened public perception of her as a base-minded and vulgar woman.

Was Sarah Malcolm innocent? It is hard to say. The evidence surrounding the case is mainly circumstantial, and I for one do not know enough about it to make an informed judgement. Yet I have made a judgment. I made it in the blink of an eye and a lack of information did not stop me. I made a judgement the moment I looked at the portrait, and the rapidity with which I decided to condemn Sarah Malcolm makes me feel uneasy.

It seems we all have a morbid fascination with murder. The legend of Jack Ripper endures to this day and consistently crime fiction and thrillers consistently top the New York Times’ bestseller list. These days very few people have heard of Sarah Malcolm, but in her own time she was the bogey-woman that the English public loved to hate – a bona-fide Lady Macbeth. It is an instinct we all have. We love to hear the shocking details of murder and depravity, as long as they are kept safely within the confines of a paperback, a picture frame, or the dusty annals of history.

It is only when they break free of these restraints and find their way into our nightmares that we wish that we had never heard mention of them. Sarah Malcolm may not be the monster under our beds at night, but she is the poisonous spider in a jar. We know she is capable of murder, but while she is contained within a restricted space we feel able to marvel at her destructive powers, safe in the knowledge that nothing of the sort will ever happen to us – at least not by her hands.

Hogarth’s mezzotint of Sarah Malcolm can be found in The National Portrait Gallery’s permanent collection. Admission is free.