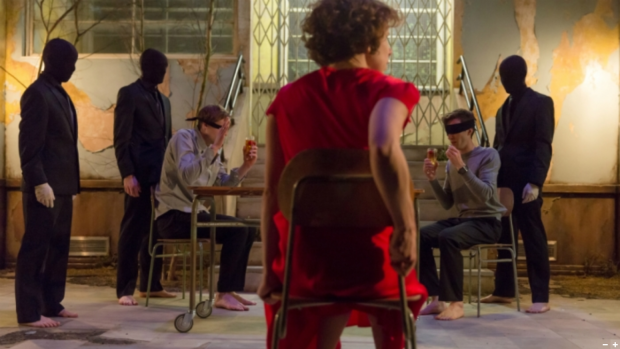 If Sarah Kane is known at all outside the little world of the British stage, it’s either for the incredibly divisive reaction each of her plays received when first performed – her first play Blasted was famously dismissed as a ‘disgusting feast of filth’ by the Daily Mail critic Jack Tinker when it debuted at The Royal Court in 1995 – or for her devastating suicide at the age of 28, following years of depression and hospitalisation. Populist portraits of Kane’s life and work have always been bleak, and the stories surrounding the National’s revival of her disturbing third offering, Cleansed, are no exception.

Inspired by Barthes’ assertion that ‘Being in love is like being in Auschwitz’, love being tested to its limits is the theme of the fragmentary plot. On an abandoned university campus, sadistic ‘doctor’ Tinker carries out torturous ‘experiments’ on various characters. Grace (Michelle Terry) mourns her dead brother and incestuous lover Graham (Graham Butler), whose heroin overdose by a lethal injection in the eyeball starts the play. Tinker also tests the commitment Carl (Peter Hobday) has made to his older boyfriend Rod (George Taylor), and the devotion of illiterate Robin (Matthew Tennyson) to Grace.

‘If you know it’s coming you’re prepared,’ Graham tells Grace halfway through the play as she squirms on the floor, beaten by invisible demons. The line seems particularly resonant in this revival. Anyone remotely in touch with the theatre world cannot fail to have noticed the furore surrounding Katie Mitchell’s unflinching take on a play already renowned for its graphic violence – even by Kane’s standards. The National have clearly delighted in the controversy regarding the production, with the various reports of mass walk-outs and fainting audience members being shared and re-tweeted with alacrity on the theatre’s social media accounts. Sensationalism sells tickets; judging by the pre-curtain conversation a couple of weeks into the run, more than a few of the four hundred strong audience in the Dorfman seem to have been attracted by the promise of blood and gore.

Yet despite – or perhaps because – of all the outrage, I found myself oddly disappointed with this production’s inability to provoke the kind of visceral reaction Mitchell seems to be going for. Granted, the various scenes of violent death and torture – Carl sodomised with a metal pole before having his hands and feet mangled, Rod stabbed in the neck with a pair of scissors – have apparently been toned down since the previews that were too much for some audience members, but it’s a shame that the conversation surrounding Kane’s debut at the National has been dominated by this aspect of the production. Frankly, the scenes of carnage are underwhelming in reality, over-egged until – like a bad horror film – it’s hard not to feel indifferent towards them. It’s tempting to see this as a problem with the script, but Mitchell has stretched out a fairly short text into almost two hours on the stage, and at times the action plods along as a result.

That’s not to say that this revival doesn’t have plenty of merits, just that Cleansed is more vibrant when it’s less graphic. Melanie Wilson’s sound design is eerily beautiful, while Alex Eales has created a set which manages to make the fragmented scenes in Kane’s text a little more coherent. There are a few moments of perfect comic timing when Rod reveals to Carl that he’s knocked five years off his age and when, force-feeding Robin an entire box of chocolates, Tinker gives a flourish as he reveals the second tray. Scenes between Tinker and the Woman (Natalie Klamer) are poignantly tender while Michelle Terry’s grief stricken howls are more gut-wrenching than any of the gore, and there’s something truly haunting about her lifeless delivery of her final speech – ‘Think about dying only it’s totally fucking pointless’ – at the end of the play.

The National’s first production of a Kane’s work vindicates a writer whose plays should – and now no doubt will – be staged more often, regardless of the obvious difficulties that such troubling and fragmentary texts present for directors. There will be better productions, and it’s a play which certainly has its flaws to begin with, but Mitchell has managed to prove that, eighteen years on, Cleansed is still as shocking and haunting as when it debuted.

‘Cleansed’ is showing until 5th May in the Dorman Theatre at the National. There is currently limited availability, but more information on booking tickets can be found at http://www.nationaltheatre.org.uk/shows/cleansed.