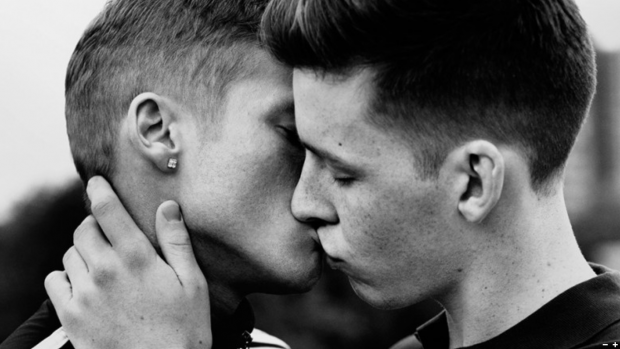 OLIVIA BOUZYK reviews ‘Mad About The Boy’ at the Fashion Space Gallery.

It is not an oversimplification to state that the fashion industry is obsessed by youth. Mad About The Boy was inspired by the recent successes of designers such as Hedi Slimane and Gosha Rubchinskiy whose designs are motivated by, and made for, the young. The exhibition sets out to explore the fashion industry’s fetishisation of the teenage boy and how this image is constructed. Mad About The Boy is located in the Fashion Space Gallery in the London College of Fashion and is curated by SHOW studio’s editor, Lou Stoppard. It includes pieces from the 1970s, 1980s and 1990s as well as contemporary contributions from designers such as Raf Simons, Edward Meadham, Benjamin Kirchhoff and JW Anderson. These men have all been, or continue to be central figures in the fashion industry.

There are eight sections to the exhibition, and these form a narrative for the different elements of boyhood. Childhood, education, rebellion, and an exploration and experimentation with gender are all stages which the teenage boy as well as the spectator takes part in. The similar subject matter of the works, and the fact that this is most definitely a fashion orientated exhibition, allow them to interact seamlessly with one another. Contemporary fashion design employs a variety of mediums in design – showing and advertising – and Mad About The Boy offers a microcosmic experience of this. Campaign photography, installation and audio are all mediums through which the viewer is invited to consider the subject: boys.

The exhibition reconstructs a part of (BR)Other By Proxy, Meadham Kirchoff’s influential Spring/Summer 2013 collection. The exhibition was inspired by Kirchoff’s personal space, and influenced by his own memory of adolescence; however, this preoccupation with the teenage bedroom is not peculiar to Kirchoff alone. Christopher Kane, another highly influential young British designer has also repeatedly cited the teenage bedroom as a source of artistic inspiration, as a mode of expression. Unable to exert any kind of creative control over the home as a larger entity, teenage bedrooms can often be self-consciously curated spaces – just as Kirchoff’s reconstruction demonstrates. Their walls are papered in posters and their floors are strewn with clothes, pointing to specific identifications and tastes. The viewer is also presented with the notion that the highly fetishist teenage boy is distinctly ordinary; after all, the room we are presented with looks very familiar.

Sexual experimentation is depicted in a similarly intimate way; Alasdair McLellan’s The Perfect Kiss exemplifies this as an undeniably attractive and intriguing image. It is a tender moment, yet it is highly sexualised; the viewer no longer a passive participant in the exhibition, but a voyeur. The nervous energy and excitement of the image, and the way in which it emphasises the very tactile nature of kissing involves us in this intimate moment. Yet, the photographer intentionally crafts this implication; Alistair McLellan is a fashion photographer and his subjects are models. The viewer is invited and encouraged, simply through the genre of the image, to relish and appreciate this consciously constructed moment. Regardless of sexual orientation, the fashion industry is undoubtedly fascinated by, and reliant upon, sexuality. The notorious spectacle that is the annual Victoria’s Secret Show is a contrastingly heteronormative example of how sexuality can be simultaneously a market, an inspiration and a means of advertisement. While the intimacy encapsulated by The Perfect Kiss is less gaudy and far less conscious of its role as an advertisement, it too commodifies sexuality, specifically that of its adolescent subjects.

The exhibition seeks to challenge the conceptions of boyhood but also bridges the gap between inspiration and product. Mad About The Boy manages to combine the tender and vulnerable aspects of boyhood with the creative and experimental nature of growing up, exploring how the different elements of male youth are interpreted in fashion photography. The model industry, the viewer, and the exhibition itself are all besotted with the ‘Boy’.

‘Mad About The Boy’ at the Fashion Space Gallery is open to the public until 2nd April 2016.