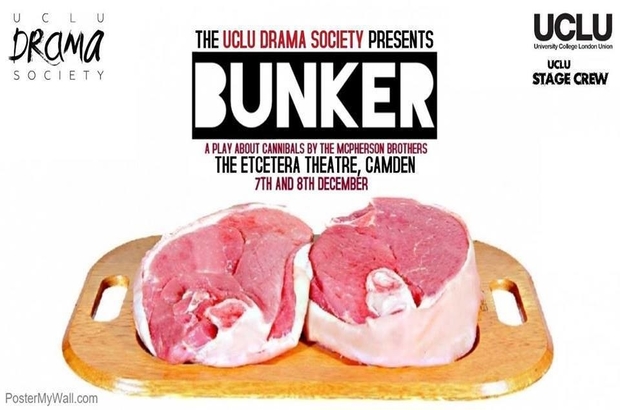 Director (and co-writer) Patrick McPherson’s UCL debut, Bunker, offers a darkly comic vision of an apocalyptic near-future. The audience is propelled into a dystopian Britain, where swarms of upper-middle class cannibals (who bear a striking resemblance to the Bullingdon Club) now roam the country, terrorising Morrisons customers and generally reeking havoc. The plot centres around the drily scathing Margot (Rosemary Moss), who has managed to build her own private bunker complete with an imposing store of tinned lychees (this becomes sinisterly significant later on, given the likeness to human eyeballs).

Margot’s secret haven is rapidly compromised as a gaggle of survivors turn up, begging for sanctuary. To Margot’s disgust, the survivors are not the hardened heroes that one might expect to survive an apocalypse, but rather a strange motley group of misfits: a soppy hipster, an infuriatingly optimistic American, an eerily weird Tumblr teen, and a girl armed only with a rucksack of loo roll and a bottle of cherry absinthe. In the claustrophobic confines of the bunker, paranoia begins to set in and the group begins to suspect that there is a cannibal amongst them. What could have been merely a surreal sitcom becomes a full-blown whodunit-style thriller. 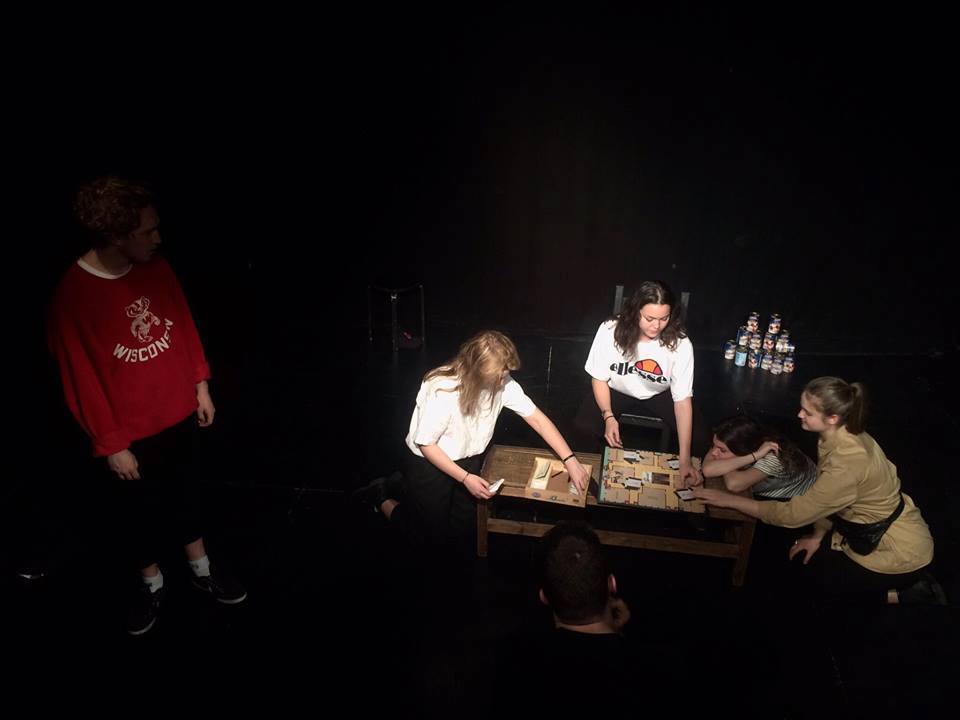 Despite the apocalyptic credentials of its premise, this is not a play that deals with the alien or the unrecognisable, it is full of familiar characters and nail-hitting one-liners. In one scene the mystical teenager, Nora (Megan Alicia Edwards) attempts to prove she is not a cannibal by describing her vegan lifestyle. In another, Reg (Noë Greenwood) ponders why the restaurant chain, Toby Carvery is called Toby Carvery. Perhaps, this is hardly surprising, given the recent trend for exploring apocalyptic scenarios close to home; this year has seen the explosion of Charlie Brooker’s Black Mirror on Netflix, while Lucy Kirkwood’s The Children garnered rave reviews at the Royal Court. Both represent dystopian visions, not far from contemporary reality. Kirkwood, in particular, rejects 1980s Mad Maxian versions of the future. Instead, she paints a restrained, human portrait of a post-apocalyptic Britain, where middle-class pensioners still listen to Radio 4 and smugly perform sun salutations. In the 2016 post-truth world of fake news, nationalist populism and global warming, the apocalypse seems to have moved a lot closer to home. The McPherson brothers (Patrick and co-writer, Hugo) seem to be exploiting this trend: the group of survivors are up to the minute stock characters, who deliver searing social observation and consistently clash in comical fashion.

Although the contrasting outlooks and personalities of the survivors provide moments of comedy gold–particularly through Benedetti’s portrayal of Polly and her ‘imperative suggestions’–the brilliance of the play lies in the narrative energy of the plot. Audience members find themselves enthralled in the mystery, as they are invited to speculate on who the cannibal might be. At times, this Agatha Christie-esque structure threatens to stray into hackneyed territory. However, it is entirely rescued by its crisp self-awareness, the play is studded with allusions to Christie’s And Then There Were None and even features a game of Cluedo.

There are elements of the play that could have benefitted from some refinement: the dialogue occasionally lacks the energy and pace to pull off a few of the jokes, and the naturalistic physicality of the performance does not always match up to the heightened, farcical style of the text. However, the generally raw and unpolished quality of this offbeat comedy works to its advantage. This is student theatre at its best: zany, brave, and robustly funny. The production is a markedly impressive feat, even more so given that cast and crew were exclusively comprised of freshers, and therefore relatively new to the quick turnaround of student theatre.

The play’s opening scene features an emergency radio broadcast, featuring the mantra ‘Stay clever, stay alive’. This seems a suitable description of the play generally, which was indeed both clever and lively, crackling with the McPherson brothers’ caustic wit and developed sense of narrative. Dark, original, and wonderfully cynical, Bunker presents a vision truly fitting for 2016.