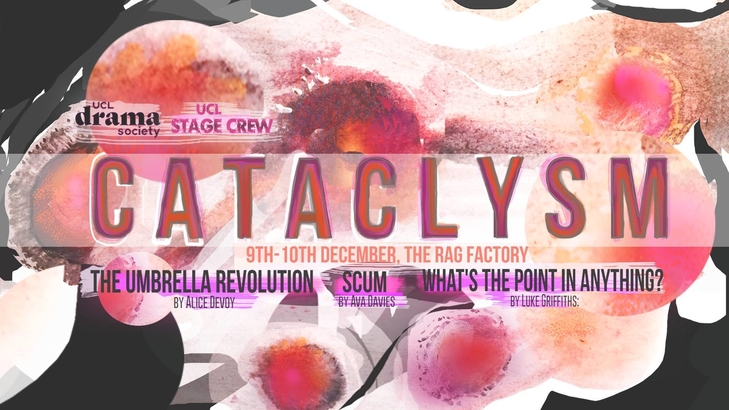 In ‘Cataclysm’, UCL Drama Society’s showcase of new student writing, chaos and destruction is all around, both internal and external. The three plays take very different topics, tones and approaches to exploring themes of ‘apocalypse, destruction and decay’, with varying degrees of success.

In What’s The Point in Anything? the audience leaves wondering exactly that. Luke Griffiths’ play is comically absurd, a drug-fuelled display of messiness that seems to take the complexities of the Brexit debate as its driving force. The piece is narratively experimental, ludicrous and unpredictable, and its characters do not always obey the rules – for example, the narrator emerging from the audience after the first scene, or a portrait coming to life. Featuring some strong performances, some witty dialogue and brightly staged sequences, particularly the bizarre council of ADAM, the madness and chaos is pervasive and inescapable. Though its attempts at pure absurdity could be fun, its lack of coherent thought at times means the piece never quite achieves what it is attempting. The confusions and contortions of the plot, and oddities of character, combined with the dominance of hallucinogenic drug sequences, make it difficult to know what it is trying to convey at any given time. Even if the take-away is exactly this – that there is nothing for us to take away – it should be made clearer than it is.

In Ava Davies’ scum, the specifics of apocalypse take a back seat in favour of rich and nuanced character exploration. A bare stage gives the monologues of the two actors our complete focus as Davies explores the effects of a changed London on two very different women of colour – one feels liberated, the other deeply terrified. Niky Krishna’s performance as the former character Elle stands out in particular, her expressive eyes conveying melancholy, then anger, then euphoria, often all at once. Ari Rajaonesy is more mournful as Ali, bored by this new life. Small details come through, like the fact that all she has had to eat recently has been crackers, hinting gently at a more sinister backdrop. Although, rather than hammering home the logistics of its dystopian landscape, the play takes place neither at the beginning nor the end of whatever has happened to London, its apocalyptic context is present right from the play’s striking opening. ‘There’s a dead man lying in the middle of the road’, we are told. The discovery of this ‘dead man’ signals the beginning of a dark and honest exploration of mortality and the frank weirdness of death, and also acts as a starting pointing for the development of Ali and Elle as characters. Ali cannot stop melancholically obsessing over the thought of one boy she used to know at school, who is now dead. Elle, on the other hand, violently cries that she hates those who are dead, those remnants of the past, and this new life excites and liberates her. It is difficult to know what to make of the internal chaos of these characters, but at the play’s climax, their two conflicting voices come together, building to a kind of hope and culminating in a well-chosen quote from Audre Lorde. There are a lot of ideas bouncing around in this piece, but we know one thing for sure; despite their differences, these women are brought together by circumstance and can find solace in the other.

The theme of fear carries on into Alice Devoy’s The Umbrella Revolution, in which the Great Storm of 1987 is used as a framing device for a multifaceted and incredibly moving exploration of one family’s grief. Or, perhaps more specifically, one family’s fear of grief. Here the grand elemental destruction being caused by the storm outside is an external presence. The set places the audience inside the family living room, in the TV’s place, the sofa faces us and the family members rotate through the domestic space. The storm outside becomes a symbol of the decay and destruction within the family, which is in turn being caused by the father’s COPD, his body’s own internal destruction. The father, played by Miles Blanch with terrifically understated fear, sadness, bitter humour and resignation, has been diagnosed with the illness and at the beginning of the piece he is taking medication. Devoy flags up the tragic ludicrousness of life’s chances – everyone assumes he has contracted the disease from smoking, but he doesn’t smoke and it is actually through asbestos in a warehouse he worked in years ago. Each of the four family members, the dad, the mum (Maymana Arefin), the teenage daughter (Megan Pratt) and the youngest child (Emma Wagstaff), takes their turn on the sofa and delivers a monologue which explores the effects of the COPD on the family. The teenage daughter is resentful and scared, the mother heartbroken and exhausted, the youngest has an awareness that something is wrong, which filters down and dampens their childish exuberance. As the mum says softly, voice breaking: ‘The kids are scared as fuck.’ So is she, and so is her husband; what terrifies them all is that they ‘can’t stop it’.

By the end, this sense overwhelms them. The weather reporters become more manic and confused, scattering their placards, and emerging as physical interlopers in the living room space, where before their movements were kept entirely separate. This is in parallel with the family’s growing realisation of their own helplessness against the, figurative, oncoming storm. As the play ends, the family returns to its original tableau on the sofa, re-contextualised, and the dad uncharacteristically lights up a cigarette, and announces to us that he has stopped the treatment. He breaks our hearts as he talks about going to the garage to scream, hiding his pain from his family who are already hurting enough. We see there is no point. The white noise of the TV rises, becoming the sound of the storm which finally engulfs the quiet domestic bubble. But even as we think the grief and pain has engulfed them all too, the dads raises an umbrella, and shelters his family underneath it, protecting them still.

The piece is tragic, its chaos quiet, and we leave the theatre understanding the catastrophic pain of this strong family. The three plays of this new showcase demonstrate that the most affecting explorations of destruction and chaos are often those that take the external and use it to examine the internal. Coming at the end of 2017, cataclysm for cataclysm’s sake is not enough; as we left the year behind us, it was the chaos, destruction and contradictions within human beings that had the most power to move us.