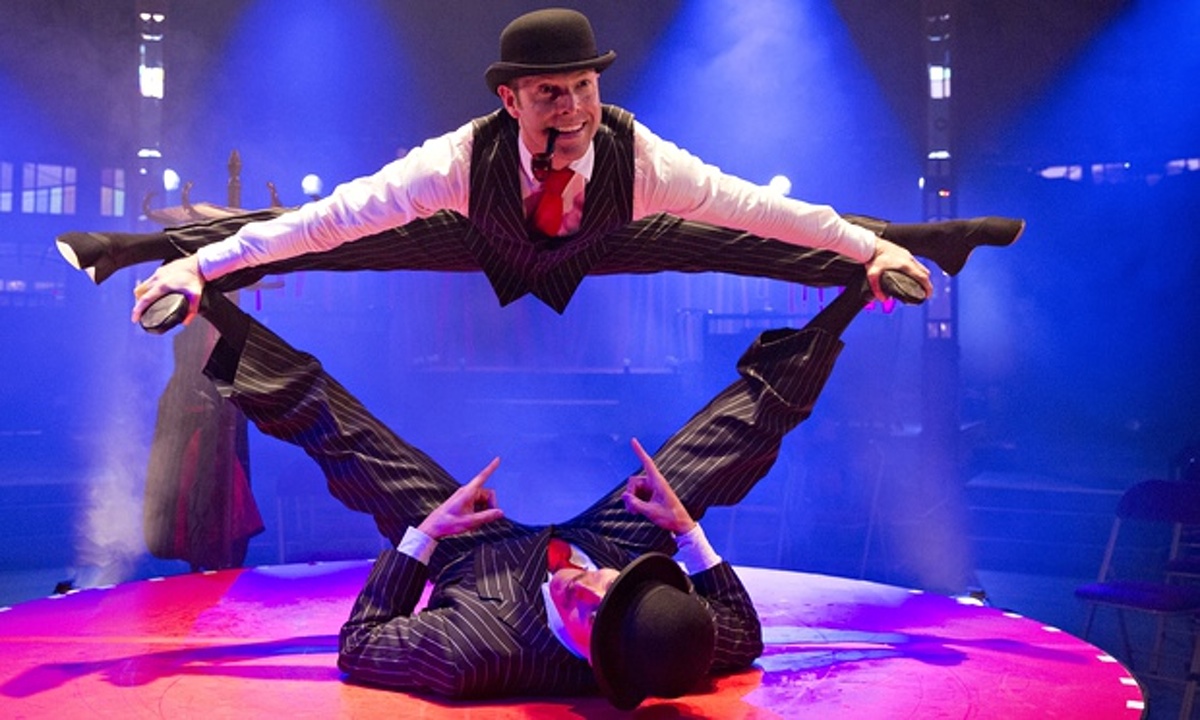 ROBERT STEVENS reviews ‘La Soirée’ in the Spiegeltent as part of The Southbank Centre’s Winter Festival.

Why has this very muscular man taken all his clothes off? Why is this woman dancing on a motorcycle? Is that a man trying to fit his whole body through a tennis racket? Why? A cabaret, in my eyes, offers no answers to these very sensible questions. A cabaret makes no narrative sense – there isn’t really a beginning or end, just a bunch of people doing stuff in no discernible order with very little point.

Yet the magic of the evening so often lies in its spectacle. ‘La Soirée’, despite its grandeur, isn’t a very smart show. In spite of its efforts, it’s still just a glossy version of much simpler cabarets; but, within a rather simplistic genre it’s probably better to ignore smarmy criticisms of structure, and lose yourself in the bright, confetti-filled moment. ‘La Soirée’ delivers wholeheartedly in that regard, and provides a couple hours of expensive, indulgent showmanship that positions the Olivier-award winning show close to the top of its leaderboard.

First opening at the 2004 Edinburgh Fringe Festival, ‘La Soiree’ has returned to The Southbank Centre’s Spiegeltent for the Christmas season. Ushers in period costume point audience members to their seats around a small ring in the centre of the room and the whole evening is run very much like a circus, reveling in the art of showmanship. Each act has a finely tuned sense of character that governs the tone of its performance. Even in more low-key acts, the charisma of the performers tends to balance out slower moments of the show. Yet with explosions, acrobats, Diablo, dancing, burlesque – ‘La Soirée’ is relentless in its efforts to impress.

With acts from all over the world it’s clear that the emphasis is on ‘wowing’ an audience, and it’s hard to find faults with a show so expertly controlled in its brilliance. The highlight of the show was by far an act called the ‘English Gents’ (Denis Lock and Hamish McCann), two very ‘gentle’ men, each stacked like a ton of bricks. In one of their performances, the ‘gents’ blew bubbles in various shapes, using a Sherlock Holmes pipe to blow smoke-filled cubes inside a web of bubbles.

Although the constant shifts in pace and tone – from punk rocker biker chick to Hugh Grant-esque British gentle giant – felt slightly contrived, there was a general sense of wonderment throughout the night. It’d be tedious to run through the acts one by one (not to mention that they change nightly), but it’s good enough to note that the average skill of each performer is fairly high, if not world-class. Although no act (barring perhaps the bubbles) truly stunned me, the raucous atmosphere that ‘La Soirée’ creates is definitely enough to recommend it.