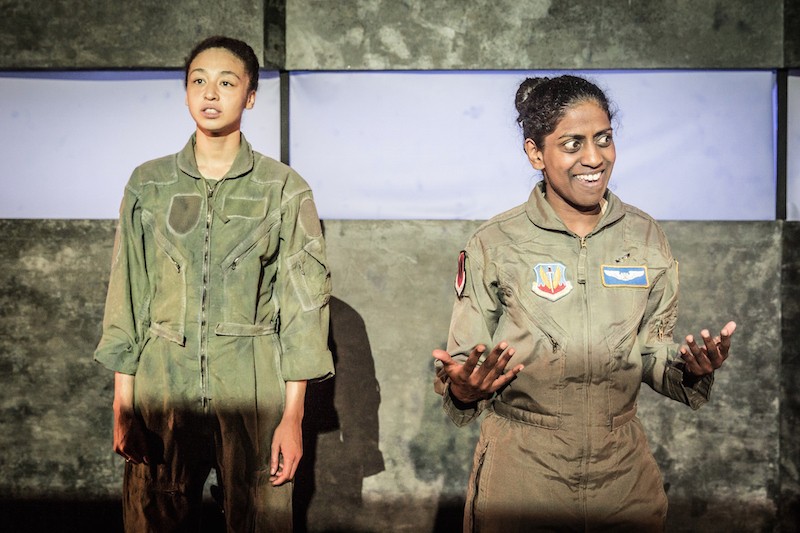 In the programme for ‘Grounded’, director Paula Garfield writes that ‘Deafinitely Theatre’s artistic mission is to create theatre that incorporates English and BSL (British Sign Language) in creative and innovative ways as opposed to just treating either language as an “access” requirement’, a mission that is certainly accomplished in this production. Originally envisioned as a one-woman play, which won a Fringe First when it premiered at Edinburgh in 2013, Deafinitely Theatre casts two actresses as the Pilot – Nadia Nadarajah who performs in BSL and Charmaine Wombwell who performs in spoken English. Though both perform George Brant’s award-winning script simultaneously, neither actress is merely an interpreter for the other. Instead, their parallel performances intertwine to form a singular and powerful narrative about war, human nature, life and death.

‘Grounded’ tells the story of an ace fighter pilot whose career flying in wars overseas is ended when she falls pregnant unexpectedly. On her return to work, she is stationed at a military base in Las Vegas, controlling drones from the ground thousands of miles away from the conflict. Much of the play focuses on her struggle to adjust to a life in which she spends her days fighting a war and her nights back with her husband and baby daughter. The presence of two actresses performing one character serves as a physical reminder of this duality and Ramesh Meyyappan’s choreography incorporates subtle moments of connection between the two actresses, highlighting the Pilot’s struggle to cope with her disparate identities.

The set is simple – a bare stage and no props. Nothing more is necessary, as everything that the audience needs is depicted through the two actresses’ eloquent performances of Brant’s words and some clever use of projection, lighting and sound. Without ever appearing on stage, a multitude of characters are introduced and developed, from the Pilot’s young daughter to her apathetic gum-chewing colleague. The sense of claustrophobia the Pilot feels as she is stuck in a military base comes across well in the small Park Theatre. The intimacy of the venue provides a perfect setting for this play, allowing the actresses to form a strong connection with the audience.

Both actresses put in excellent performances, transitioning between the humorous, the emotional and the increasingly dark elements of Brant’s script excellently. Their characterisation of the Pilot is not identical. Wombwell’s delivery of the lines is often more sarcastic whilst Nadarajah seems younger somehow; at times it is almost as if Wombwell is playing an older version of the character looking back at herself, though the multifaceted character that they form together is clearly the same at its heart. Of the two, Nadarajah is particularly engaging. Her signing is beautiful to watch and she is able to express so much through her eyes alone that even those audience members with no knowledge of BSL will find her performance compelling.

BSL is the ideal language for storytelling. Innately visual and expressive, it gives a sense of immediacy and clarity that cannot be achieved in quite the same way through spoken language alone. Fierce, funny and frightening, this bilingual staging of ‘Grounded’ is unmissable for deaf and hearing audiences alike.

‘Grounded’ is showing at Park Theatre until 21 November. For tickets and more information click here: https://www.parktheatre.co.uk/whats-on/grounded