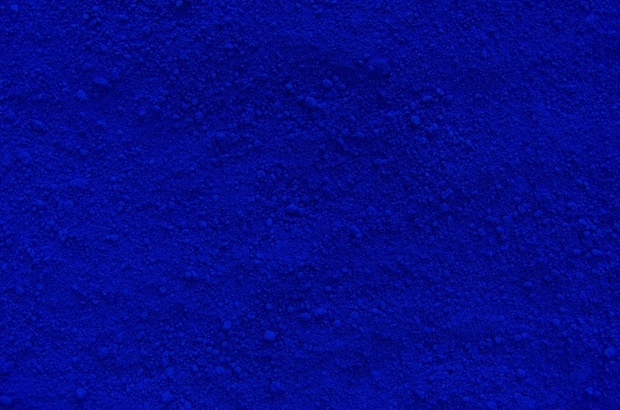 An unframed, unwavering blue painting stands before you. As you stare at the painting, the square of colour slowly detaches itself from its canvas medium, drifting through the air. All at once, blue envelops you, permeates you. Chills crawl under your skin. The ultramarine induces a state of vertigo. An endless, deep, and obsessive ultramarine possesses you; its saturation stains your mind.

My first encounter with a Yves Klein painting was decidedly dramatic. Encountering his painting in his hometown of Nice, France, my fascination with the strong, vivid blue was instantaneous. I speak about a specific blue: blue #21177d, otherwise known as International Klein Blue (IKB). The colour is distinctive; once seen, IKB will stay in your mind. The vivid ultramarine became Klein’s signature. The holistic feeling of Klein’s work is palpable every time I come across one of his monochromes – it is like discovering missing pieces of a puzzle which builds a bigger picture.

IKB has not always been his colour of predilection. Indeed, in his earlier work, Klein focused on two other colours: monopink and monogold. The interaction between Klein’s pink, gold, and blue are exemplified in Ex-voto to Santa Rita da Cascia from Klein’s series, The Keepers. This ex-voto was given to the convent of Santa Rita da Cascia, a popular branch of Catholicism in Nice. It is a small box compartmentalised into three equally sized, square-shaped slots segmenting the three colours. Underneath the three slots, is a rectangular bed of IKB ultramarine supporting three gold ingots. Klein attached symbolic value to each colour: the blue symbolises spirituality, pink connotes flesh, and gold embodies passage into the immaterial. Klein explained that the three colours are ‘a universal explanatory principle of the world’; spirit, flesh, and the notion of an immaterial concept represent the Trinity, that frames the basis of his artistic production.

Saint Rita of Cascia, also known as the patron of the impossible, was devoted to her faith despite the brutality and despair she faced in her lifetime. She was a child bride and was abused throughout her life by her husband. Klein’s ex-voto testified to the deep spirituality which animated his life and art.

Although Klein itemised his tricolour set, he quickly abandoned monopink and monogold in favour of the blue hue. Following the publication of Yves Peintures, a series of tricoloured prints, Klein was disappointed by the public’s reaction to his work. Colour was seen simply as ornamentation. The desired tone of reverence was not fulfilled in the viewers’ receptions. Klein decided, therefore, to focus only on his aquamarine blue. Of all three colours, he chose the blue one as he considered it was the one which best conveyed his religious fervour. In his own words:

Blue has no dimensions; it is beyond dimensions, whereas the other colours are not. All colours arouse specific associative ideas, while blue suggests at most the sea and sky, and they, after all, are in actual, visible nature what is most abstract.

Through his blue, Klein aimed at representing the intangible, the immaterial, the infinite, the world beyond the physical.

Critiques of Klein denounce him as a con artist: that his work did not require any technical talent. Those judgements are tied to traditional conceptions of art, which identify value with techniques of realism. Klein fought these conceptions through his work. Klein described his IKB as ‘a Blue in itself, disengaged from all functional justification’. Art critics initially disparaged Klein’s technique, criticising that his lack of representational form rendered his work meaningless. On the contrary, Klein thought that traditional conceptions of art exposed impositions and limits on form producing meaning in art.

Each blue […] treated in the same way presented a completely different essence and atmosphere. None resembled any other – no more than pictorial moments resemble each other – although all were of the same nature.

Blue became the unifying element of his art. This technique is accentuated by the fact that Klein never named his other monochromes individually. It was only after his death that the colours were numbered by his wife from 1 to 194. The numbers were arbitrary; any monochrome could have received any number. Nevertheless, Klein’s affinity for this seemingly unremarkable colour makes the viewer reconsider its uniqueness.

The focus on colour allows viewers to attend to concepts surrounding the material, focusing instead on the material’s culture instead of the material itself. Klein arrests the viewer’s attention, calling for an obsession with a single colour, and new ways of perceiving the real. Through his monochromes, Yves Klein calls for the liberation of the human mind from the material world.