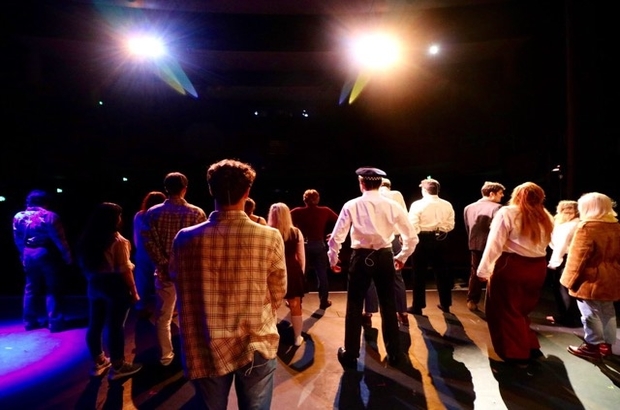 The character of Sweeney Todd first entered the public consciousness in 1846, in the Victorian penny dreadful serial The String of Pearls. These days, of course, most people come into contact with him through some variation of Stephen Sondheim and Hugh Wheeler’s 1979 Broadway musical. The tale’s long history made UCL Musical Theatre Society’s claim that they would be presenting ‘Sweeney as you’ve never seen it before’ particularly bold.

The premise of the production overseen by Mabel Moll and Vaishnavi Mohan (director and producer respectively) was to have the events unfold in 1979, the year Sweeney Todd debuted. This concept could have worked incredibly well given the similarities between the social context at the time and the issues explored in the show. The ‘Winter of Discontent’ which started that year saw tens of thousands of public workers on strike and the governing Labour Party flagging by 20 points in the polls. May of the same year brought victory for the Conservative Party in the general elections and saw Margaret Thatcher become the UK’s first female Prime Minister. But the optimism this change sparked was to be short lived, and by November the Conservatives were already four points behind Labour once more. It was a year of intense dissatisfaction among large swathes of the population, and the promise of huge public spending cuts did nothing to ease it. Mrs Lovett’s struggling pie shop, and the corresponding musical number ‘Worst Pies in London’ could have really capitalised on this, while the idea of ‘Pirelli’s Miracle Elixir’ could have been exploited as the magical political cure the populace were so desperately searching for in 1979.

Unfortunately, other than a couple of banners and the costumes, the show did not appear to engage with the change in time period. Ben Baker’s convincing depiction of the Beadle was perhaps the closest they came, with his characterisation epitomising the late-‘70s smarmy stereotype. To claim that this muted temporal shift makes the show ‘Sweeney as you’ve never seen it before’ is perhaps to overstate the case a little.

That is not by any means to say that it was a disappointing show. The casting was impeccable, with so many performers deserving special mentions that there is hardly room to complete the task. Mrs Lovett is not an easy character to take on, but Sephora Parish perfectly balanced the humour, sorrow and eeriness of the role with ease. Abel Law’s portrayal of the flamboyant fraudster Signor Pirelli had the audience in stitches, and he played the part with an apparent effortlessness which was a pleasure to watch. The title role, taken by Adam Haddour, was a highlight of the show, and his commanding stage presence shone through particularly at the moments when his anger broke free of the harrowingly fragile control.

The big choral moments were largely a triumph, with the masquerade scene particularly standing out, alongside ‘God, That’s Good’ and the asylum episode. The finale was a wonderfully strong end to the show, seeing the climax of the gothic and unsettling atmosphere created throughout and leaving the audience deeply perturbed as they left the theatre.

There were admittedly a few production issues, namely with the microphones, on Friday night. Mics were turned on too late in several instances, which led to lines being completely lost, and at one point they were left on too long and resulted in a backstage conversation being broadcast over part of a musical number. This was an especial shame given UCL Stage Crew’s precedent for offering incredibly slick and professional productions. Some cast members’ elocution could have been slightly clearer, and words were sometimes lost in the intricate rounds present in many of the musical numbers. Given the intended frenetic energy of the show as a whole, however, this in some ways augmented the desired effect.

Overall, then, Sweeney Todd was an impressive show performed by a wonderful cast. While it would have been good to see them make more of the decision to set it in 1979, the staging and characterisation made it a pleasure to watch regardless. Was it ‘Sweeney as you’ve never seen it before’? Not quite, but it was — notwithstanding the technical hitches — a production worthy of standing shoulder to shoulder with previous renditions.

Sweeney Todd ran at the Bloomsbury Theatre from 28th February to 2nd March.