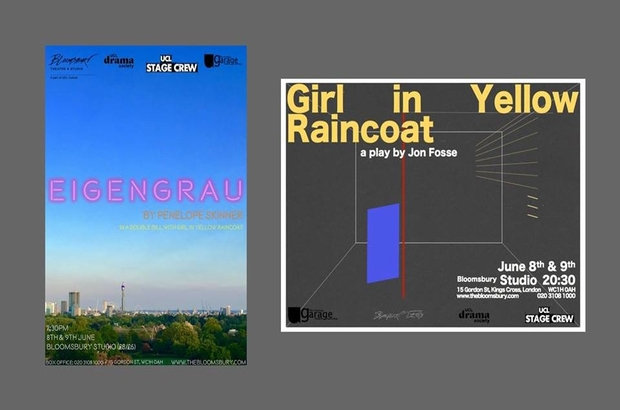 Drama Society’s term three double bill in the Bloomsbury Studio was a fitting end to the 2017-2018 academic year. From the fearful uncertainty in Girl in Yellow Raincoat, to the clash between feminism and predatory masculinity in Eigengrau, the production seemed an accurate reflection of the confusion and conflict that has filled our headlines in recent months.

The evening began with Penelope Skinner’s Eigengrau, a disparate, irreverent, and at times gruesome tragicomedy concerning the lives of four entangled characters. The central struggle of the play is between manipulative lothario Mark (William Mead) and staunch feminist Cassie (Aude Naudi-Bonnemaison). The performances are strong: Mark is skin-crawlingly authentic, while Cassie is brought to life with fiery passion. In contrast to these tough characters, the touchingly melancholic Tim (James Fairhead) and the frenetic and scattered Rose (Ema Mulla) stack up as the casualties of Mark’s callous antics. Directed by Freddie House and Ema Mulla, the play raises pertinent and uncomfortable questions: how are we, in our romantic lives, to navigate between the confident but morally bankrupt Mark and his quite frankly pathetic foil in Tim? Or between the frustratingly credulous Rose, and Cassie – a tragic yet bold heroine who, pregnant by the close of play, remarks that she might not be able to love her baby if it’s a boy? The big questions are inflated again and again before being swiftly punctured by the sharp intrusion of humour. This dissonance works well in the play’s opening scenes, but as the play enters darker and darker territory it begins to sag and lean heavily on its actors, who occasionally seemed to struggle under the weight.

One theatre-goer remarked that he didn’t like plays where all the characters were unlikeable. However, here this is simply not the case. The play is compelling because each character, despite their obvious and crippling flaws, is afforded an opportunity for sympathy from the audience. Even wannabe-Casanova Mark, of whom little more is seen than his chameleonic veneer, is revealed by degrees to the audience so that we at times see him in a positive light and are taken in by his act in much the same way as the play’s characters. In the case of Rose, her acts of extreme self-debasement force the audience into an uncomfortable pity, which jars with the easy mockery of previous scenes. This is not a simple narrative, and the morality of the characters is not black or white but a dark, dark grey, which perhaps solves the mystery of the play’s title. Indeed, it’s the sort of grey the human eye sees in a pitch-black room – the grey being flecked with constant visual noise. In fact, noise was the operative word throughout: garbled recordings were played in scene transitions, and characters’ lines clambered over one another or were simply discarded as meaningless. To call this play nihilist would be a disservice. Rather, it teeters at the brink of nihilism, stops in intense confusion, and tries to laugh it all away.

Such was the mood as the audience sat down for the second performance of the night: Jon Fosse’s Girl in Yellow Raincoat, directed by Seren John-Wood and Emma Wagstaff. Confronted with an abstract, repetitive, and arguably boring script it was an achievement that the production held the audience’s attention with conflict, humour, and poignancy. An innovative set, taken up and fiddled with throughout by the enigmatic Pablo Temboury, sketched out the characters’ permitted lines of movement as it was re-laid with the intricacy of a mechanical drawing. A prominent tape recorder, wielded with sly irony by Cora Burridge, reminded us that words, however innocuous – and at first glance Girl in Yellow Raincoat’s words certainly were – may come back to haunt us. Throughout, the charisma of the cast injected energy into otherwise unremarkable exchanges of words, particularly in the dynamics between the play’s two couples, played by Monika Klara Herman and Alberto Lais, and Matthew Neubauer and Emma Wagstaff respectively.

A lover’s jealousy, the comfort of an embrace, and the primal, crippling fear of being left alone – all were felt keenly by the watching audience. Charming moments of unexpected levity helped break up the pace of the otherwise uninterrupted sequence of recollection and recognition. Yet, for its many virtues, all of this was a rear-guard defence, valiantly fought by the cast and directors of Girl in Yellow Raincoat, against the encroaching feeling that nothing was actually going on. As the fresh smell of the performance’s ideas evaporated, and as the script’s repetitions became more and more grating, it became apparent that the audience were simply waiting in polite curiosity for the performance to end. Perhaps the script was too daringly abstract, perhaps we had been poorly primed by Eigengrau’s bleak mood, or perhaps we were simply philistines.

What is certain, however, is that Girl in Yellow Raincoat was not incapable of provoking serious thought about our relationships with other people: who we remember, who we forget, and who we leave behind. Coupled with the postmodern fable of Eigengrau, the evening was an ample demonstration of theatre’s power to inspire introspection, and to challenge audiences in spite of their objections.

Eigengrau and Girl in Yellow Raincoat played at Bloomsbury Studio on the 8-9th of June.