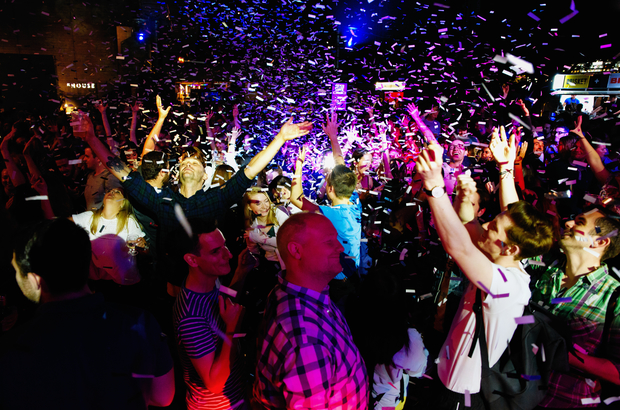 It’s a sunny day on London’s Southbank, and sprawled in front of the National Theatre, several new street food vans have taken up residence. This is the first indication that something is brewing – this year marks the fourth River Stage Festival, but the first time it has had an official press launch. I attended this impressive event, one of many indications that London’s largest free outdoor arts festival (as of last year), organised by the National Theatre in collaboration with five of the UK’s leading arts and culture organisations, is growing. As a free, family-friendly space that champions accessibility in a city whose theatrical landscape can be woefully lacking in that department, the festival is sorely needed, and its growth something to celebrate.

For five weekends over summer, the bank outside the National Theatre will be taken over by dance, theatre and music performances, workshops, and street food vans. Accordingly, we are gently guided into the cosy Understudy Bar – one of several new pop ups – where we sample some of the food and performances that will be on offer. The small taste I got of the performances – and the food, did I mention I got a bunch of complimentary food I didn’t deserve – was thoroughly enjoyable. And, lest we forget, the performances are completely free.

The taster event was hosted by double Olivier award winning drag queen Le Gateau Chocolat, who has been performing at River Stage on behalf of The Glory (one of London’s leading queer performance venues and night spots) since the festival first began fours years ago. As he himself says, swanning through the crowd in his plummy and exuberant way, draped in gold sequins: ‘I’m normally very expensive, darling.’ So, everybody: take advantage of the rare opportunity we have been given. Le Gateau Chocolat, alongside long-time collaborator Jonny Woo, opens the sample of performances with a fabulous rendition of ‘I Know Him So Well’, just as The Glory will open the festival on Friday 13th July, for the third year in a row. Their family-friendly showcase will include drag queens, underground stars, club kids and cult comedians, including a re-working of Liza With A Z, a Madonna cabaret special, and Jonny Woo and Le Gateau’s new show. It is one of London’s LGBTQ+ calendar highlights, because, as John Sizzle, director of The Glory, says: ‘River Stage is an amazing opportunity for underground performers to share their work with a big, varied crowd – It’s like a cultural exchange.’ People who might never otherwise have seen performances like this get the opportunity to stumble across it.

The second weekend, beginning Friday 20th July, will see a takeover by HOME Manchester, who, following last year’s successful debut, will bring a diverse line-up of northern performers and musicians to the capital. HOME were the second to perform at this event and they gave us two moving, intelligent, measured monologues musing on the concept of home and northern identity. They held the room – hands paused on the way to mouths, vegan pizza suspended mid-air. As Le Gateau Chocolat noted, it’s incredible that something as profound and moving as that could come after his own high camp performance. This contrast is a microcosm of the festival itself. HOME Manchester will begin their weekend with an opening night including ‘sequin-clad satirical weirdos’ Bourgeois and Maurice, and Madchester legend Dave Haslam. The weekend will also feature pop-up theatre from The Manchester Project, suffragette sash workshops with Mighty Heart Theatre, live music from MIRO and spoken word from Young Identity, among many others. Saturday evening will culminate in a set by DJ Paulette.

Sadler’s Wells’ example performance was energetic, interactive and improvisatory, and so good-spirited that the audience participation actually bordered on enthusiastic (we had, admittedly, been buttered and liquored up). On 27th July the theatre’s dance company will make its River Stage debut for a weekend championing a diverse range of dance styles, including hip hop, ballroom (by disabled and non-disabled dancers), traditional Indian kathak dance, contemporary and flamenco. The weekend will also have inclusive participatory workshops including yoga and family-friendly workshops including flamenco and lindyhop. It even culminates in a ceilidh.

Fourth to perform was a cellist from classical, electronic and experimental music collective nonclassical, who will be taking the stage from Friday 3rd August. The cello solo was intense, sweeping, fresh and arresting, and a distinct change of tone from what had come before. Their weekend will begin with performances by Klavikon and Tom Richard. There will also be renaissance music and lived improvisations from cello trio Tre Voci, an exploration of the work of 20th century female composers from Sarah Dacey, music for cello and tape, plus jazz vibraphone, from Ceceilia Bignall, a new performance of Prokofiev’s ‘Cello Multitracks’, led by Peter Gregson, and the anarchic jazz/classical/rock collective DOLLYman. DJs across the weekend include Late Junction’s Nick Luscombe and the genre-bending Mr Switch.

Rounding off the event and the festival is the National Theatre itself. Already in a great mood, we participate in a rousing, silly song with Mrs H and the sing-along band, who aim to provide quality music for children and families that adults can enjoy too. Everyone got involved; even those who were at first reluctant eventually put down their ice cream and artisanal beers. The National’s programming begins from Friday 10th August, mixing family focussed workshops, sing along bands, a ground-breaking circus show, a tea dance, and live music and DJs. The weekend will culminate in a free screening of the NT Live recording of the recent production of Stephen Sondheim’s Follies. Follies starred Olivier award winning actress Imelda Staunton and was the winner of Best Musical Revival at this year’s Olivier awards.

As Rufus Norris, artistic director of the National Theatre, said: ‘The key thrill for me is seeing the crowds of new faces that River Stage brings to the South Bank.’ Those new faces are the best thing about the festival. The press event offered only a small taste of what will the River Stage will bring to London this summer. The National Theatre has declared its mission to be as ‘open, diverse, as collaborative and as national as possible’; the festival’s accessibility and its diverse and varied content, which extends beyond merely London-based organisations, shows impressive strides taken towards this aim. Plus, I don’t know if I mentioned, but it’s free. You’ll be missing out if you don’t go.