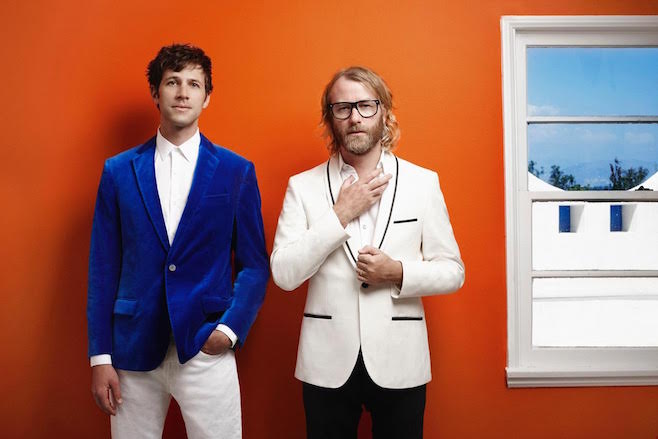 HENRY DRAKE takes us through the collaborative album by Matt Berninger and Brent Knopf.

When established artists merge to form a new group, it is always hard to not to be blinded by preconceived opinions from prior love affairs with bands. For fans, collaborations leave serious conundrums. Will it work out like DARKSIDE, Divine Fits or Blakroc? Or will it become the skeleton in the closest like Michael Jackson and Eddie Murphy’s Whazupwitu? These questions might have crossed the minds of fans of The National and Menomena, upon the latest release of EL-VY’s Return To The Moon.

EL-VY consists of Brent Knopf of Portland neo-folk outfits Ramona Falls and Menomena, and Matt Berninger, lead singer of Ohio’s alternative rock group, The National. Knopf is known for his vast use of instrumentation, to the point where it can be difficult to find a sound to pin down as distinctly his. Berninger, on the other hand, has been fine-tuning his husky baritone balladry over the course of the last six National albums. His vocal delivery is still uniquely his own, with his lyrics centring on the classic themes of claustrophobic nostalgia and pettiness throughout adulthood.

The not-quite-a-breakup album Return to the Moon deals with love from a grittier and almost Father John Misty-esque perspective. ‘Silent Ivy Hotel’, with its sharp repetitive guitar line, portrays relationship stagnation, both parties incapable of leaving without the cumbersome feeling of ‘a waste of love’, a potent lyric pounded alongside the heavy overdriven guitar melody of the outro. ‘Need a Friend’ depicts the pettiness of relying upon a partner, as Berninger plays the whiner, imposing strong expectations on another and lashing out melodramatically when those expectations fall through. Then ‘Careless’ takes the theme home with its intensely fragile acoustic guitar line, accompanied by Berninger’s croaky vocals crooning of loss and the inability move on. Finally, Berninger tactfully uses the break up of 80s punk band Minutemen to form an analogous backbone that bridges the albums’ tracks. He compares his grief and struggle to gain closure to the incapability of Minutemen members to continue playing after the death of a band mate.

Through Knopf’s spacey keyboard arpeggios of ‘Paul is Alive’, Berninger explores yet another of his favourite themes: upper class guilt and nostalgia for his ‘sugar-coated childhood’ which National fans are oh so familiar with. In fact, fans might even be disappointed that Berninger has not jumped at the chance to try something fresh on Return to the Moon.

Berninger’s resistance to change does not take away from the genre-bending soundscapes Knopf employs throughout the album. From the opening track, it’s hard to put your finger on what this album will be. Knopf teases listeners with its vintage pop tunes, using irresistibly catchy guitar licks which he then follows up with slick bass lines, and a xylophone melody on the second track ‘I’m The Man To Be’. To say Knopf is showing off in terms of his use of instrumentation would be an understatement. His beautiful layering of acoustic melodies, reverbed warbler sounds and crisp drum beats on ‘It’s a Game’ create huge amounts of space and carry home Berninger’s immobilising vocals. In fact, it is Knopf’s tactful and industrial use of instrumentation coupled with the sheer honesty of Berninger’s liquid vocals, that keeps the overall sound of the album fresh to listeners.

All in all, a collaboration such as Return to the Moon will always be polarising for fans. It may not be as experimental as Ramona Falls, or address enough non-National based themes, but what should be respected is the drive for these artists to step out of their medium and join forces with another artist in an attempt to create something entirely new.

Return to the Moon was released on October 30th on 4AD Records.