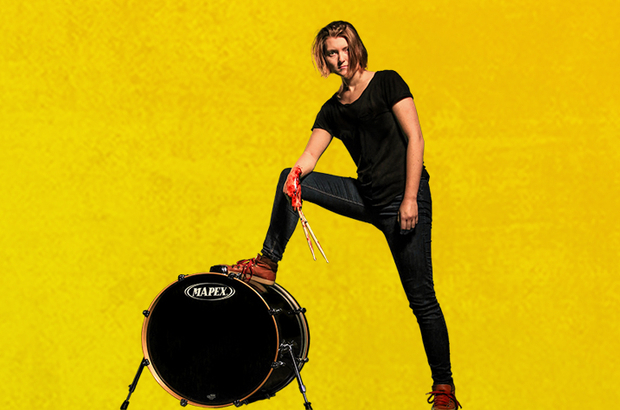 Attending a show at the Bunker is always an experience; a former underground parking garage, the space feels at once transient and firmly fixed in the landscape. Seating only 110 audience members, the intimate theatre is a perfect setting for this visceral and gripping reworking of Sophocles’ Electra.

The set is bared back but striking, a dusty floor provided the foreground of the stage, which is contrasted with the strip lights in the background. In the four corners of the stage are various instruments, a synth, electric guitars and drums. This juxtaposition of ancient and modern is consistent throughout the play and is its defining characteristic. The clothing is modern, with Electra wearing a hoodie and converse, but the colour palate is mostly earthy tones, reminiscent in a way of Ancient Greece. The script, although modern, is in verse, and so the contrast is paralleled in every aspect of the production. The effect is jarring and draws attention to the refiguring of this story in a modern setting, highlighting its timeless portrayal of family relationships and experiences of grief.

The character of Electra is recast as a teenager approaching adulthood, unlike the usual depiction of her as an ageing spinster. The expression of anger and grief, constant throughout the play and central to Electra’s character, can often seem strained when played by an older actor, but here seemed integral to her stage of adolescence. Lydia Larson’s portrayal of Electra was one of the most nuanced I’ve seen; too often Electra becomes two-dimensional, her raging and grieving so constant that it almost seems to lose meaning. In Larson’s performance, on the contrary, the spattering of obscenities aimed at the other characters had all the force of adolescent angst behind them.

The play’s music is almost constant throughout the performance, either setting background ambience or taking centre stage, with the cast regularly performing musical or dance sequences. The show begins with a striking a capella song, seemingly inspired by Ancient Greek music, which gradually incorporates aspects of punk until the whole cast has formed a strictly modern punk band. Though the clash between ancient and modern can sometimes feels jarring in contemporary productions, here it is delicately enacted and is feels purposeful.

This blending of the two eras is most subtle in the play’s implications of political agenda. Electra was originally part of a trilogy that showed the progression from primal cycles of revenge to the democratic Athenian institution of law courts. Here the political aspect is remoulded to fit the modern day, referencing issues such as excessive surveillance and the reliability of the press under a tyrannical leader. While avoiding blunt parallels with any specific political regime, current issues are alluded to without being explicitly engaged with.

One aspect of Greek drama always difficult to incorporate into modern productions is the presence of divinity. The gods, central to Greek myth and concepts of fate, simply have no place or parallel in the modern age. However, this production achieves a balance of the two cultures – that of the play’s writing and that of its performance – so well that it is not a hurdle. Indeed, the question of the gods and their influence over human life central to the original play, when placed in a quasi-modern context where politics seems to have replaced religion, slips well into the fabric of the production.

The very script is itself modernised to striking effect, with the cast at several points engaging directly with the audience, speaking to us as the citizens of Argos, or part of the resistance. We are constantly involved directly with the play as it unfolds before us. At one point, Clytemnestra laughs at us, saying that the drama being reported ‘is not political, it’s personal’. But the joke’s on her: the political and the personal are inescapably entwined, and it is this that will cause her fall from power.

A self-proclaimed ‘lyrical epic’, Sophocles’ original is reworked and the plot expanded on, lending it a modern essence. Though a little lengthy, with certain scenes feeling unnecessary, overall the additions work well, and allow space for more developed and nuanced characterisation. A true testament to the timelessness of Greek drama, the tension and anguish of all the characters is deeply felt. The vivacity of the play is renewed, the themes are displayed in an original way, and the play as a whole is brought successfully into the modern age.

Electra is running at The Bunker until 24th March. Find tickets and more information here.