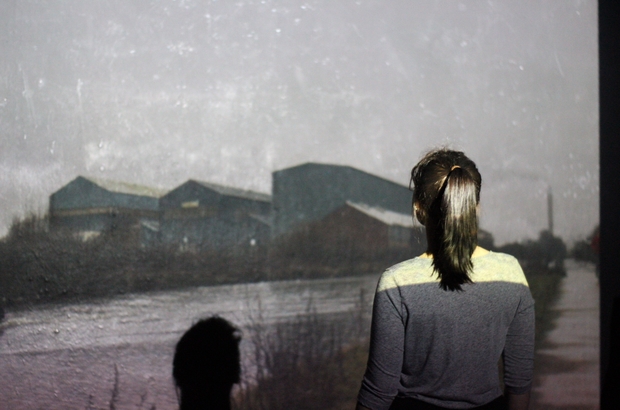 SELMA REZGUI reviews The Sea at the Camden People’s Theatre.

‘Waiting for a connection.’

I’ve often joked that the tinny and plaintive voice that comes out of my Bluetooth speaker when I try to hook it up to my phone is a tragically relatable symbol of urban millennial life. In his latest play, Thomas Froy uses this same tinny voice to expose an epidemic of loneliness, reliance on technology, and of being alone in a sea of people – and how the only meaningful connection in a person’s life can sometimes be their internet connection.

This sparse production, which Froy also directs, interrogates the nature of urban isolation in a digital age. It opens with a film projected onto the theatre’s back wall: a series of shots of London, both images of the City and the pockets where nature seems to be tentatively reclaiming the space, rendered in muted tones and accompanied by immersive music.

The Sea revolves around ‘A,’ (played by Sarah Dean) who is nameless, anonymous, and whose narrative monologue makes up the majority of the play. She is lonely, depressed, spending days on end in bed and emerging only to pound London’s pavements in isolation. She doesn’t seem to work or study, only sporadically attend a running club and offer unsolicited help stacking shelves in her local shop. Other than the projections that provide a backdrop during interludes when A herself is not onstage, the only other object is a clothes rail, populated only be a few coats and scarves. The desolately empty stage (which this play has in common with Froy’s previous production, Hommo,) means the audience’s attention is by default devoted entirely to Dean.

Late in the first act, A encounters another person, B (played by Rebecca Hendri), on the bus. For the first time, she feels something, a connection with another human being. She follows her home. Nothing comes of it. The play is permeated by expectation and frustration as A begins to emerge from her self-inflicted isolation into a world which does not seem to welcome her. Her one relationship (refreshingly, a queer one in a play not explicitly concerned with queer issues) is painfully awkward to witness, and Froy’s writing puts its finger directly on the way in which our reliance on technology as a means of navigation and communication cuts us off from other people as much as it connects us to them.

Dean’s performance is commendable in its versatility. She manages to smoothly transition between comic flippancy and biting intensity within a sentence or two, and her delivery of sincere confession, observation and self-aware quips strikes an affecting balance. The second act of The Sea feels at first like a totally different play. The abrupt introduction of the theme of technology as a force of social alienation means the play veers into something resembling an episode of Black Mirror. The pre-recorded phone customer-service-provider voiceovers are somewhat jarring, and the play is undoubtedly at its strongest in the first act, when A has the space to own the stage and make herself compellingly vulnerable. That said, an exchange between A and B in which they communicate solely by text despite being in the same room, culminating in the inevitable ‘haha x’ is spot-on and garners a big laugh from the audience.

One moment where the play seems to lose sight of its ideas is a phone conversation between A and another person, presumably B, who is caught in the midst of an ‘incident’. A frantically instructs them to ‘run towards the river’ and leave the underground station. Froy seems to be alluding to the risk of terrorism in cities, and the hysteria it can unleash, exacerbated by smartphones and instant communication. The moment is fleeting, though, and its incongruous presence in the script seems to implicitly endorse precisely the obsession with the ‘terror threat’ that it seeks to critique.

The Sea effectively uncovers the lonely, unglamorous, and universal effect of moving to a new city. Froy’s London is a hostile place, and the total anonymity that A endures in the play’s first act seems by the end to be infinitely preferable to the awkward, empty small talk that dominates the relationship between A and B. Its most successful moments are in the astutely observed commentary of A as she addresses everyone and no one, and, aptly, the moments in which there is no tech interfering with Dean’s performance.