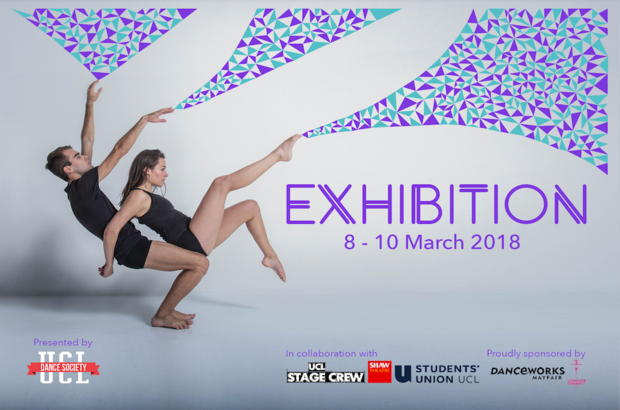 This year, UCL’s Dance Society has gone beyond the traditional notions of movement to create a show that takes inspiration from a variety of artistic forms. Exhibition celebrates the fusion of dance with other creative media, such as literature and visual art.

The show’s three motifs, ‘The Written,’ ‘The Visual,’ and ‘The Object,’ required choreographers to create a dance stemming from a source of artistic inspiration, such as a poem, a painting or even just a commonplace object. Back in November, after presenting our concept, I could never have expected the diversity and multiplicity of bids we would receive. From a re-enactment of Picasso’s Guernica as a tap piece, to the translation of sign language into contemporary movement, the ideas were innovative and thorough. Since then, choreographers have used their initial stimuli to create and develop new and original artworks, producing extensive performance synergies.

This year the show spans all styles, from ballet and jazz to Latin and Bhangra. Within the genre of hip-hop, for example, choreographers have experimented with the ebb and flow of movement. Doris Tao opens the show with an abstract piece, inspired by the evolving styles of Chinese calligraphy and set to Ancient Chinese instrumental music. In another group dance, Zuzana Mihalčinová has considered musical notation in both a literal and figurative way, making the music come alive through her intricate and inventive choreography. Both choreographers have produced captivating works, with an extreme attention to detail and precision.

Exhibition deals with as many complex themes as it does styles of dance. It looks at geometric patterns and pop art, but also delves into notions of gender stereotypes, religious extremism and mental health. Esme Miller’s piece ‘Wasted’ is a poignant and moving tribute to Tom Clifford, a UCL student who tragically took his own life in December 2017. The dance, a contemporary solo by Yuki Ponedeca, is choreographed to a poem written by another friend, Haseeb Iqbal, in response to Tom’s death. It profoundly highlights the actuality that exists behind rising mental illness statistics and the accountability of universities.

The show is a composition; whilst it is tied together under its artistic venture, it diverges in its portrayal and provocation of different emotions. There are some intensely poignant moments, but it is also fast-paced with pieces that hold the feel good factor. Javier Sanchez Bautista’s musical theatre piece makes you feel as if you are in a mini La La Land. Li Ann Chew and Adie Thomas have combined their tap and ballet skills to produce a piece that showcases both styles, illustrating two families coming together in a joyful wedding scene. The show builds and ends with a climactic energy in a fierce and fiery piece entitled ‘This Girl Can.’

These are just a few examples of the imagination and creativity that make up and define the show. Exhibition illustrates how dance is not only a tool of emotional expression, but also one of historical and cultural exploration. It literally takes on its meaning; there is an exhibit in the foyer showcasing the choreographers’ sources of inspirations that began as the foundations from which the show has evolved. It has been amazing to see how such a range of mediums have been interpreted and transformed to create such a dynamic production.

Maybe it is said every year, but I truly believe that this year the talent is higher than ever. The depth and quality of movement from ballerinas, gymnasts, stompers, actors (to name just a few) is engaging and impressive. The show is the culmination of hours upon hours of rehearsals – when I say blood, sweat and tears I really mean it, and bruises, so many bruises – and is testament to each and every one of the 100 cast members.

Exhibition is not just a show but an experience, including something for everyone in its artistic endeavours. I promise that you will leave inspired and enthralled by the variety of performances that make you laugh, cry, and most importantly want to get up and dance.

Exhibition is running from 8-10th March at the Shaw Theatre in Euston. Check out the Facebook event for more information and trailers. Tickets can be bought here: http://www.ucl.ac.uk/event-ticketing/booking?ev=17090