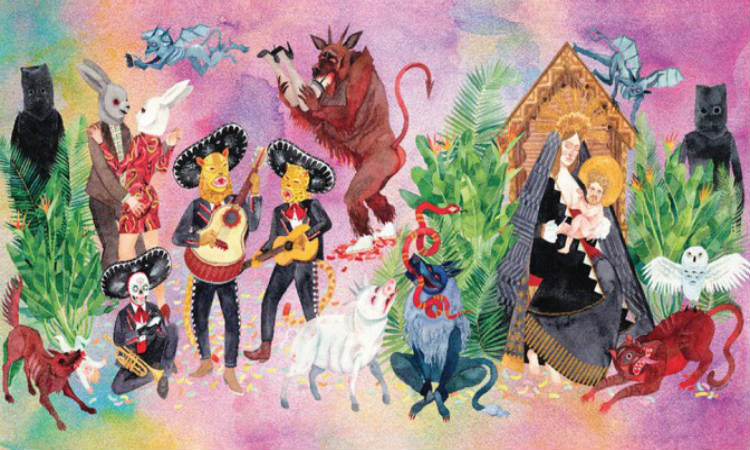 Apparently Father John Misty has “never, prior to now, really written a love song.” His new endeavours are apparent on his new album I Love You, Honeybear; a record filled with love songs of many different kinds. Father John Misty is the moniker of one time Fleet Fox and depressive folkster J. Tillman. But on 2012’s Fear Fun Tillman introduced the world to his alter ego, finding a sarcastic wittiness and an expansive new sound that blended his previous folk sensibility with alt-country influences. Lyrically, the album created a universe of existential debauchery, a place where you can take opium tea with Heidegger and Sartre. I Love You, Honeybear takes place in much the same realm but Tillman’s newfound romanticism transforms this world into a more hopeful place with just as many complexities.

The lead single is ‘Bored in the USA’, one of the few songs not about Tillman’s relationship. His anxiety is amped up to the maximum and his social commentary razor-sharp, as he deconstructs contemporary American life with all its financial illogicalness and drug-softened ennui. His skill with wordplay is clear with lines like “Keep my prescriptions filled / And now I can’t get off.” His ambivalence to the libido-killing meds is a depressing statement of the apathy that comes hands in hand with modern life. The chorus’ melody rises quite powerfully in a way that transforms this song into a kind of lament. The irony is, however, that modern American is so dark and twisted and the pills so potent that he doesn’t even know what he is mourning. In any case, its rousing exclamation – ‘Save me white Jesus!’ – is a satisfyingly hilarious middle finger to Fox News.

The rest of the album is filled with love songs that narrate his relationship or ponder its significance within the wider world. The two opening songs, ‘I Love You, Honeybear’ and the snappily titled ‘Chateau Lobby #4 (In C for Two Virgins), are full of an honest, cynicism-free romantic spirit. “Honeybear, honeybear / mascara, blood, ash and cum / on the Rorschach sheets where we make love,” begins Tillman on the former. His ability to combine depraved eroticism and a sense of pure love, considers whether the two ought to be explored in opposition, as they so often are. The swaying beat, the repeated coos of the pet name and the exquisitely arranged strings also evoke Tillman’s passion in a dreamily majestic fashion. For ‘Chateau’ Tillman draws on Mariachi music, adding trumpet-flares and Latin percussion, in this ode to the beginning of his relationship with Emma. His devotion to his wife and her beauty calls on his lyrical skill, telling us that she eats “bread and butter / Like a queen would have ostrich and cobra wine” as if she were some modern day Cleopatra.

Although some songs take a less romantic view of love, one thing that pervades is Tillman’s unflinching honesty. ‘Nothing Good Ever Happens at the Goddman Thirsty Crow’ describes an unpleasant encounter he had with a man hitting on his wife at an LA Whisky Bar. While the lazy saloon-style tempo and country stylings give his rancour plenty of room to spread and fester. Tillman deploys his best lyrical takedowns in her defence, asking “why, the long-face jerk-off?” The sickeningly macho persona in this song is a side of Tillman that, unlike many other male songwriters, he’s willing to honestly present and criticise, as equally disgusted with himself as his listeners are.

Penultimate track ‘Holy Shit’ summons up the album’s spirit most definitively. Tillman has said that he wrote it in a ‘wild mood’ on his wedding day, although at first listen it does not reflect well on his nuptials. Listing the myriad of modern problems; from “coliseum families”, “age old gender roles” to “planet cancer”. All of these mundane miseries sung over such a beautiful melody, one that only grows in power for a sweepingly gorgeous finale, appear both jarring and bleak. But Tillman brilliantly transforms the songs message in the final line, removing their love from the global shitstorm, saying, “What I fail to see is what that’s got to do with you and me”. In a typically sarcastic yet sentimental Misty fashion, he transforms what could be the most depressing, world-weary song on the album into its most potent statement of love.

In the past Tillman has said that he’s a “petty, sarcastic person” and his acerbic wit can certainly be brutal and off-putting. But his willingness to turn this caustic criticism onto himself coupled with his acute sense of humour means his songs never become overwhelmingly repulsive. In any case, his ability to write wide-eyed love songs without recourse to soulless clichés and his ear for a beautiful melody make this album a triumph.

I Love You, Honeybear was released on the 9th of Feburary by Bella Union