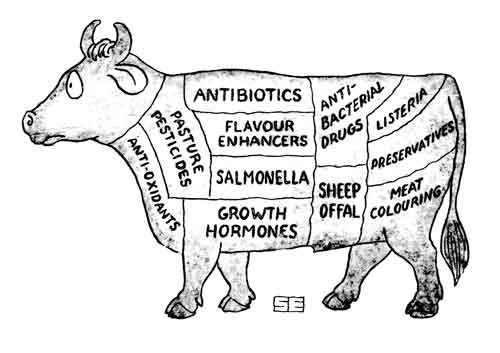 TESS LOWERY weighs in on the vegan debate.

Vegans have often been ridiculed and scoffed at as nothing more than extremist vegetarians. Veganism has been associated with eccentric celebrities, pot-smoking hippies and animal activists chaining themselves to railings; it is the Scientology of the food world. Paul McCartney’s been banging on about it for ages, and not many of us seem to have listened. So, in 2015, is there anything new to say about it?

Well, in 2006, The British Vegan Society estimated that there were 150,000 vegans in the UK, and that figure seems to be on the rise. A more recent poll estimated that 5.7% of the UK population are vegetarian. This means that there are over 3 million people in the UK currently eating a mostly plant-based diet. 2014 saw the German supermarket chain ‘Veganz – We Love Life’ opening its first branch in the UK, offering over 6,000 vegan products. The store is hoping to take advantage of increasing interest in meat and dairy-free food with celebrities such as Jay Z and Beyoncé amongst those to have dabbled with the diet.

The thing about being vegan is that it’s not just a way of eating; it’s a lifestyle. I have always been somewhat wary of the vegan cosmos, as it seems to come hand in hand with the semantic trimmings ‘cleanse’ and ‘detox’. This idea of detoxing – that you can purge your body and leave your insides squeaky clean – is a myth, a pseudo-medical fantasy that is designed to sell products. However, let’s not be too quick to dismiss the health benefits of eating bucketfuls of vegetables, fruits and nuts. Taking the plunge into veganism means having a better understanding of where nutrients comes from, what nutrients your body needs and what makes up a healthy, balanced diet.

Aside from considerably improving the individual’s wellbeing, veganism also helps keep the world healthy. Did you know that it takes three to fifteen times as much water to produce the same amount of animal protein as it does plant protein? Water conservation? Check. Did you also know that tropical forests in Brazil and other regions are destroyed daily, in part, to create more acreage to raise livestock? Cattle-ranching is now the biggest cause of deforestation in the Amazon, with 80% of deforested areas in Brazil now being used for pasture. Preserving the environment? Check.

Before this starts sounding too holier-than-thou, also bear in mind that many meat producers routinely use antibiotics to starve off infection – you only have to look at McDonalds’ recent statement about cutting down the use of antibiotics in their chicken to see evidence of this. Antibiotics may kill bacteria, but they in turn eventually become immune to the drugs. New drugs are needed, and as long as they keep coming, resistance isn’t necessarily a problem. But there hasn’t been a new class of antibiotics discovered since the 1980s.

Leviathan use of antibiotics in animals encourages the growth of drug-resistant bacteria that causes hard-to-treat human disease. What animals consume becomes part of their muscles and flesh; eating this meat steadily contributes to harvesting super-infections that are dangerously resistant to antibiotics. The emergence of multidrug-resistance pathogens is becoming more and more clear. Each year in the United States, at least two million people become infected with bacteria that are resistant to antibiotics.

We are potentially facing a fairly terrifying future in which one of the greatest medicinal tools is ripped from the hands of doctors. Although in 2006 the EU banned the use of antibiotics used in human medicine from animal feed, a recent Consumers Union study revealed that approximately 80% of the antibiotics sold in the US are used in meat and poultry. Once a virus has gained immunity to antibiotics, there is no going back. It becomes a global problem.

I’m all for people knowing more about their food. It seems to me that wider society is unbelievably detached from where their food comes from. When we buy bacon from the supermarket it’s presented in a cute little packet with the image of an adorable little pig on it, which is completely at odds with the reality of mass animal slaughter. Yet seemingly, the vegan vogue has little to do with ethics. Whilst the Vegan Society defines the lifestyle as “a way of living that seeks to exclude, as far as possible and practicable, all forms of exploitation of, and cruelty to, animals for food, clothing and any other purpose”, in reality it’s much more health related. People are concerned about cruelty towards animals, yes. But they also want healthier skin, a trimmer figure, better sleep patterns… the list goes on.

And then there’s the money thing. It’s all very well sticking to an eternal menu of tomatoes, kale and broccoli, but if you start wanting to branch out (surely food is meant to be a little fun?),  it becomes apparent that vegan wine, rosemary and garlic almonds with aloe vera and grilled tofu steaks with piquillo salsa don’t come cheap. The sheer amount of effort it takes to cook vegan meals, unless you’re Beyoncé and have a spare £400 to order from Honestly Healthy (a vegan delivery service that does all of the imaginative stuff) is, quite frankly, overwhelming. You can’t just pop into Tesco and expect to pick up a quick lunch. Thought and preparation goes into every meal. Another thing people have difficulty with is the impact on social life. Backpacking as a vegan must be near impossible; many restaurants still don’t cater for vegans, leaving you with a fulfilling meal of a side salad.

Even so, I can see a future where veganism stops being a niche dietary choice. Menus and food aisles will be teeming with lemony quinoa salad and shaved vegetables; pot-roasted aubergine and cumin, spinach and spirulina smoothies. The end of this month marks the UK’s first ever Meat Free Week (23-29 March).  We don’t have to jump head-first into the ocean of animal-free products, but maybe one or two of you will  spare a thought for where the beef in your burger came from. Baby steps.