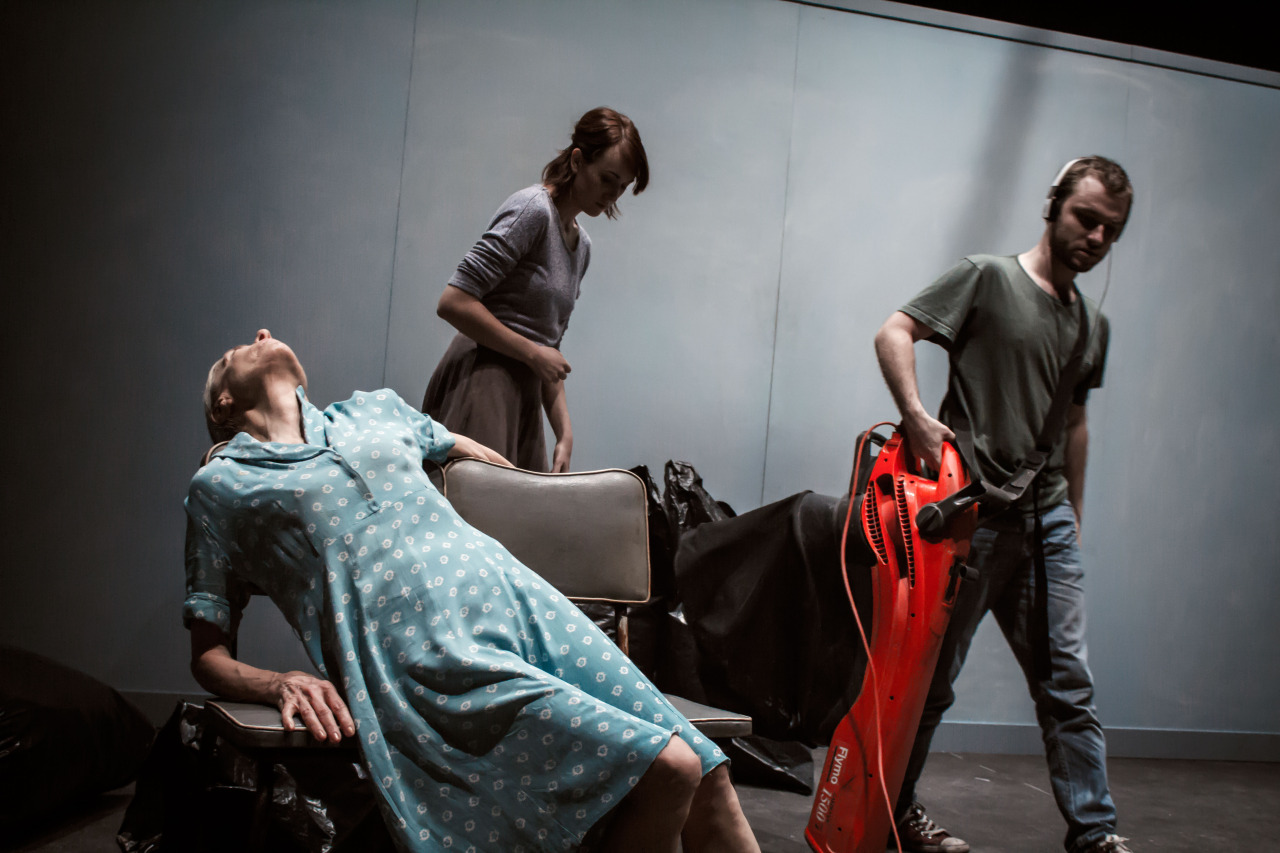 When it won a Fringe First in its run at The Traverse in Edinburgh last summer, I heard a lot of talk about ‘Lippy’, the acclaimed work of Irish theatre company Dead Centre. This is highly ironic given that the play is all about the unspoken.

The show begins with some light-hearted meta-theatricality, thanking the audience for staying for the ‘post-show discussion’ that is about to take place. This gets a fair few laughs once the audience gets past the collective confusion and anxiety of everyone thinking they’ve missed the actual show. What follows is a surreal interview with the actors involved in the fictional Dead Centre play that we have all supposedly just seen. Truth and fiction are artfully blurred as one of the real directors, Bush Moukarzel, takes the role of the interviewer and the real Young Vic staff rush around bringing in the actors and sorting out sound and lighting for the ‘discussion’.

This centres on lip-reading, taking us on a tour through its place in pop culture from Scorsese’s ‘Casino’ to Kubrick’s ‘2001: A Space Odyssey’. The audience is then told that one of the actors (David Heap) is able to read lips himself, and analysed CCTV footage as part of the police investigation into the deaths of the Mulrooney family, an aunt and her three nieces who, in July 2000, sealed themselves off in their small rented home in the Irish village of Leixlip and prepared to starve themselves to death. His ensuing demonstration of lip-reading using the interviewer is, of course, comically bad; we’re reminded of the importance of context, and that ultimately even with context it is all conjecture.

And context is something completely missing from the tragic case of the Mulrooneys. The reasons why these four reclusive women entered into such a ‘cruel and slow’ suicide pact will always remain shrouded in mystery, not least because they shredded and pulped almost all of their documents. All that remained were a few letters addressed to friends from one of the sisters, Ruth, and a note to her from another of the sisters, Jo, begging her to reconsider the ‘slow and painful hell’ to which they had resigned themselves, and to instead suggesting they ‘think of exiting ourselves humanely’.

This becomes the focus of the play, which draws our attention to the fictional element of any story ‘based on’ truth, as we’re somewhat abruptly transported into the Mulrooneys’ kitchen. The women themselves don’t speak; the lip reader instead puts words in their mouths. The women’s own words, the ones that they systematically shredded and shoved away in rubbish bags, are scattered around the stage by an industrial leaf blower operated by the ‘sound guy’. The women are also tossed around, blown into place against the wall kitchen wall, where silhouettes have been drawn by the lip reader. It’s an exceptionally inventive way to represent how the tiny scraps of information we have about these women might be distorted and manipulated, without using any of the language that is used to do just that.

The play ends with a tribute to Beckett’s ‘Not I’; as the last sister Catherine dies, a screen is filled with a close up image of her talking mouth and she narrates a stream of consciousness monologue, with every twitch and quiver of her mouth scrutinised by the audience. It’s one last clever reference, to a play telling the story of another silenced and reclusive woman, before the final blackout.

While I sometimes felt that it was a little too intellectual and uncomfortable to simply be enjoyable, there is no doubt that ‘Lippy’ is a brilliant piece of theatre.

‘Lippy’ is showing at the Young Vic until 14 March. For tickets and more information click here: http://www.youngvic.org/whats-on/lippy

Image credited to the Young Vic.