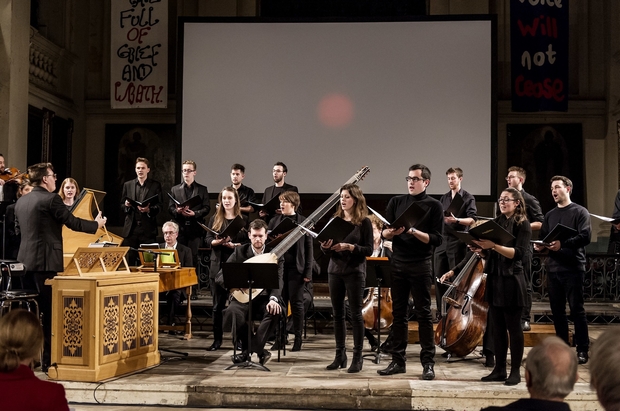 Starting at 5 and wrapping up at 9.30, the first event of the Spitalfields Music festival was a festival in itself. Yet the range of the line-up, the colossal talent of the musicians and the celestial quality of the sound meant the evening sailed by.

The main event of the festival was truly the House of Monteverdi. While the performance did not exclusively feature Monteverdi’s own compositions, he was the musical patriarch, shaping the selections of the modern compositions which interspersed the full performance of his Eighth Book of Madrigals. These madrigals, performed here by the Erebus ensemble, La Nueva Musica and soloists Katherine Manley, Ben Johnson and Magnus Walker, all centred on the tempestuous theme of “Love and War”. From the opening solemn chords of the choir, the audience was enveloped in the turmoil of this perennial emotional paradox, one that has persisted since the Renaissance age.

Splicing up the Madrigals, we were treated to the works of contemporary artists in line with the ethos of Monteverdi to engage with new and emerging sounds as well as old, traditional ones. The Norwegian composer Anna Thorvaldsdottir’s Shades of Silence followed the opening madrigals. In her piece, she embraced what would be anathema to the Renaissance sound, using the same instruments but experimenting with their potential. Here the harpsichord strings were plucked, producing a harsh metallic ring atop occasional dissonant chords; the strings struck harshly on the bridge of the instrument. It sounded as if it was composed from the breathes in-between the notes of a madrigal; the rests, pauses and the sonorities left hanging in the air.

Jocelyn Campbell’s THEFT, written for Violin and Viola de Gamba, intentionally borrowed from Monteverdi. The pieced was assembled from fragments of madrigals, specifically rare points when not all voices were singing together. Through this focus, these transitory moments took centre stage.

Josephine Stephenson’s work Between the War and You performed by The Hermes Experiment revolved around War from multiple perspectives and how love is sustained or affected by this period of crisis. Soprano Heloise Werner adopted four voices in this demanding piece: The lover left pining at home for her love at war, the disembodied soldier, the voice of war itself and the earth. This piece was especially striking and unsettling, with its harsh realism leaving any listener pining for the (perhaps contrived) perfect cadences of classical tonality.

Worth mentioning also is Qasim Naqvi’s Fjoloy or what he calls his ‘headphone piece’. Composed on an ARP Odysessy Synthesiser, each part of the double-voiced Soprano, Alto, Tenor, Bass arrangement is fed through to each singer individually via headphones. What Naqvi discovered was that this allowed for greater pitch nuance and intricacy of rhythm than the sometimes inflexible practice of following written music.

Monteverdi bookended the evening with a constellation of voices and counterpoint finally resolving  that hallowed perfect cadence which the uncertainty, characteristic of contemporary classical music, eludes. Overall, the expertly curated programme gave new life to Monteverdi’s works and news ways of listening to his compositions. The hidden moments and the complexity of Monteverdi’s structures revealed themselves through the interaction of old and new.