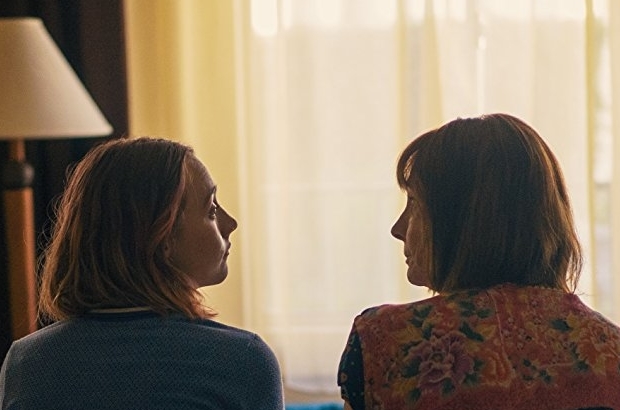 In many respects, Lady Bird is a quintessential coming-of-age film. Set in 2002 Sacramento, Christine McPherson (Saoirse Ronan) is a self-assured, pink-haired 17 year old, who renames herself ‘Lady Bird’ and argues brutally and constantly with her mother (Laurie Metcalf). Despite being destined to remain in California for university due to her mediocre grades, she dreams of attending a liberal East Coast school, even though her parents struggle to make ends meet and her Berkeley-educated brother is working a checkout.

Lady Bird is driven by a desire to be something more, dropping her best friend Julie (Beanie Feldstein) and drama club for a more popular crowd in order to get closer to her new love interest Kyle (Timothée Chalamet), a black-turtleneck-wearing musician. She is constantly trying to mould her life into a film cliché, even using the line ‘come here often?’ on her first boyfriend when they meet in a supermarket. ‘I hate California,’ she declares at the opening of the film, ‘ I want to go where culture is, like New York, or at least Connecticut or New Hampshire where writers live in the woods’. After her mother retorts that she should ‘just go to city college’, Lady Bird flings herself out of their moving car.

The central relationship of the film is that between Lady Bird with her mother. As Gerwig herself states, it is often forgotten that one person’s coming of age is another’s letting go. Metcalf is phenomenal as Christine’s mother: Marion is a tough woman who loves her daughter deeply and who ultimately wants the best for her, whilst also trying to protect her from disappointment. Gerwig nails the constant mother-daughter bickering – in one scene in a thrift store, her mother criticises her for dragging her feet, to which Lady Bird has a biting retort to hand. They continue to fight until the argument suddenly disseminates upon the discovery of a perfect dress for Thanksgiving dinner at her new boyfriend’s house. Later, when Lady Bird waits to make a grand movie style entrance in her newly acquired outfit, her mother’s face crumples as Christine’s boyfriend naively announces how Christine told him she lived on the wrong side of the tracks. The film’s subtle yet nuanced expression of class, where Marion works double shifts yet still struggles to pay for food at the supermarket, reflects more than just the post-9/11 economy. It depicts a mother trying to prove to her daughter the limits of dreams for the struggling lower middle class, to which her daughter sees someone clipping her wings.

Lady Bird does have romantic relationships – first with Danny (Lucas Hedges), then with Kyle – but they do not exist to validate her. This provides a welcome change to many coming of age films, where often the girl purely exists as a projection of the male protagonist’s self-discovery. This idea is flipped on its head by Gerwig, who herself is often reduced to ‘muse’ rather than writer or director. Instead, these boys illustrate Christine’s teenage phases: her foray into acting with co-star Danny, and her adventures with the popular crowd with Kyle, after she abandons drama club to vandalise a nun’s car. More important is her friendship with Julie: their giggly moments over stolen communion wafers are a sweet memorial to the simplicity of teenage friendships. Ronan, at 23, has her teenage mannerisms on lock, making Lady Bird likeable despite all her pretentious proclamations. She’s too enthusiastic to be cool, declaring earnestly to her boyfriend Kyle that they have each other’s ‘flowers’ after losing her virginity to him, and then crumbling after he reveals he isn’t a virgin. Gerwig makes great use of her teenage characters, never portraying them as clueless, but yet still managing to harness their youthful naïveté for sweet comedic effect.

Lady Bird’s greatest moments are in the everyday scenes. Gerwig creates a capsule of female adolescent experience that is often ignored or sidelined. As Lady Bird secretly recruits her father to help her in her East Coast dream, she hides these applications from her mother. Although we know about all the uncertainty in Christine’s future – the possibility that her dreams will not be enough – it’s her mother’s job to bluntly protect her from herself, in a way that Christine sees as cruel. In one scene where the pair search for a prom dress, Marion tells her daughter that all she wants is her to be the best version of herself. ‘What if this is the best version of me?’ Lady Bird responds deflated, in an ill-fitting dress with eyeliner smeared around her eyes, disappearing back into a dressing room.

Lady Bird is about more than a teenage girl’s ambition: it is about the impossibilities of these ambitions and their financial and geographical limitations. Gerwig allows us a happy ending, but one that feels refreshingly real for Lady Bird, who is an authentic illustration of a real teenage girl. She wouldn’t suit a dreamy Hollywood ending, after all.

‘Lady Bird’ is on general release.