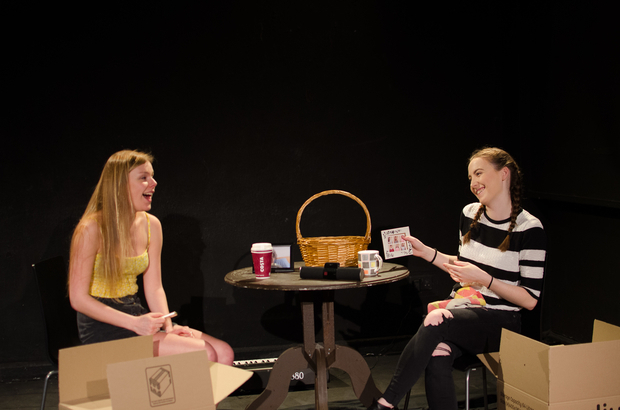 ‘Write what you know’, Mark Twain famously declared. Presented by UCL’s finest musical theatre talent, Spaces is an in-house brainchild and a production penned by students and for students. The musical tells the story of four young adults in their last year of university, caught on the precipice of further education and adult responsibility, while also negotiating the emotional turbulence of young love.

Lao Lee’s debut musical production is steeped in the air of romance. It opens with Clem (Yuey Zhang) and Eva (Caoimhe Bermingham) unpacking their lives from cardboard boxes and moving into their new shared home, glowing with the reassurance of a long-term relationship. They smile knowingly at their friend Millie (Imogen Hartley), who is at the centre of an emotional tryst; her former boyfriend, Michael (Jamie Hardie) has just returned from a sabbatical abroad. But Clem and Eva’s glib words of wisdom seem only to deepen Millie’s longing as she tries to piece back together her relationship.

The actors, though nervous at first, settle into their characters as the show develops. All of them find themselves trapped in the wishful fantasy of ‘Ten Years Time’: the belief that things will remain as they are now, even in the future. Yet Lee’s jaunty, fast-paced plot renders a static future impossible. Lee says the work is ‘both hopeful and dark’; a musical in which elements of playfulness sit alongside poignant realities to provide a reflection of what being a young and independent student entails. The musical manages to strike a balance between millennial despair on the one hand, and brazenly honest humour on the other: ‘remember that time you fell asleep inside of me’ must be one of the musical’s best lines.

Lee’s score, orchestrated by Thomas Hetherington, is sprightly, lapsing into melancholy at frequent intervals, and with shifting harmonies; a movement appropriate to the students’ changing emotional states. Musical theatre as a genre often walks a fine line between song and subject matter, and occasionally these very British characters seem trapped in a New Girl-type American sitcom. The grave problems of alcoholism and suicide, for example, sit uncomfortably within a ballad. Though Michael’s struggles with addiction beg for further elaboration, he is admirably portrayed by Jamie Hardie. At other times, the sardonic juxtaposition of sombre issues with gaudy chorus plays to the musical’s advantage, allowing it to comment on itself as a piece of meta-theatre.

This is a musical of vignettes rather than propulsive action: a play full of spaces, which can be both emotional and physical. Co-directors Lee and Eng O-charoenrat examines how spaces change as they age. At first, they are agents of dreams and seem to bear infinite possibility. In time, however, they lose their magic and contain a heart-breaking quaintness. How fitting that the stage is set with mundane props including a garish purple blanket, some Quality Street chocolates and a little plastic cactus.

An interesting addition to the musical are the freeze frames. As one scene comes to an end, the characters remain on stage, motionless. Their statue-like figures are plunged into darkness, staring blankly into the imagined vista of the future. Other characters arrive on stage and perform a separate scene, creating a double exposure effect with the scene that came immediately before it.

The play ends with the characters’ imminent surrender to forces far greater than young adult love and worlds far greater than campus. By the end of the play, the quartet is pulled into the world of adult responsibility through the death of a parent, an identity crisis and an episode of unfaithfulness.

Overall, the musical’s portrayal of the spaces – emotional and physical – that students navigate whilst at university is complex and authentic. Spaces’ real achievement, though, is its contribution to diversity in theatre and LGBT+ visibility on stage. By candidly placing these characters on stage, Spaces distinguishes itself from other musicals in a bold and praiseworthy way.