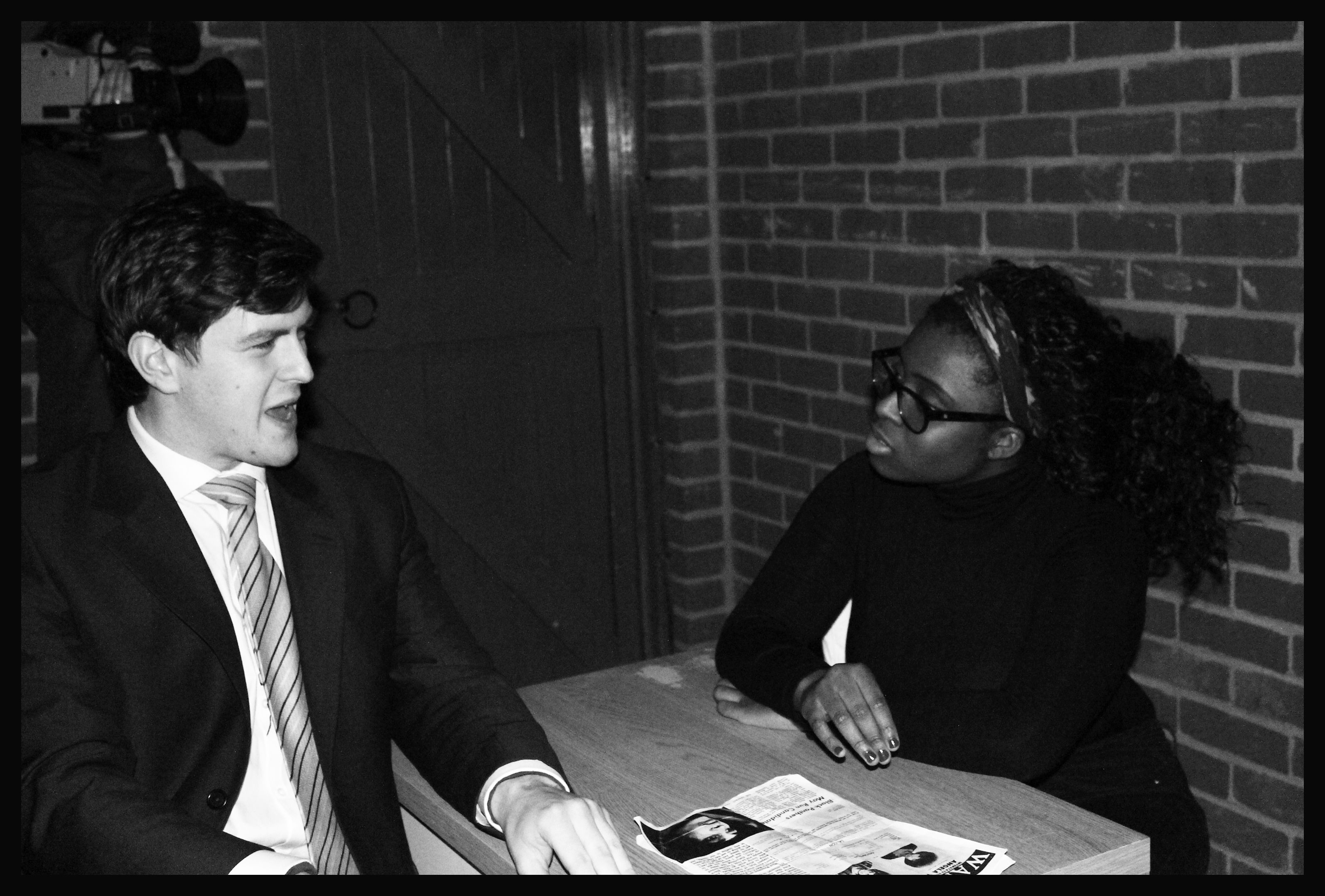 Scenes of a Domestic Nature was staged across several rooms in a house in Holloway. This might not sound all that propitious; however, it gave the production team a rare freedom to experiment and be playful with space. The scenes were able to extend across and outside of their spaces; with ‘The Acid Test’ happening across a bedroom, corridor, and bathroom; and ‘An Interview with Angela Davis’ starting in the open air, before moving into a small, cell-like garage. The spaces themselves could also be heavily customised and felt very much lived in and owned by the characters. I loved the individual sets they built up, from Bex Parker-Smith’s tissue-littered room in ‘The Surprising Germination of Andrea Fitzgerald’ to the thicket of drained shot glasses in ‘The Acid Test’. Not to mention the innovative tech set-ups in ‘We Used to Smoke Cigars’ and ‘Am I Saying Anything’, in which the text and Facebook messages between characters were relayed to the audience via screens around the room.

The audience, in bursts of seven or eight, were led through a sequence of scenes and were invited into various rooms. Mostly we were lined up against one wall with the scene playing out in front of us. We were voyeurs: a murder happens in front of us in ‘We Used to Smoke Cigars’ but we do nothing. However, our small numbers and closeness to what was going on meant we were also immediately involved and even implicated in the scenes. It was a successfully immersive experience, slick, and professionally handled. 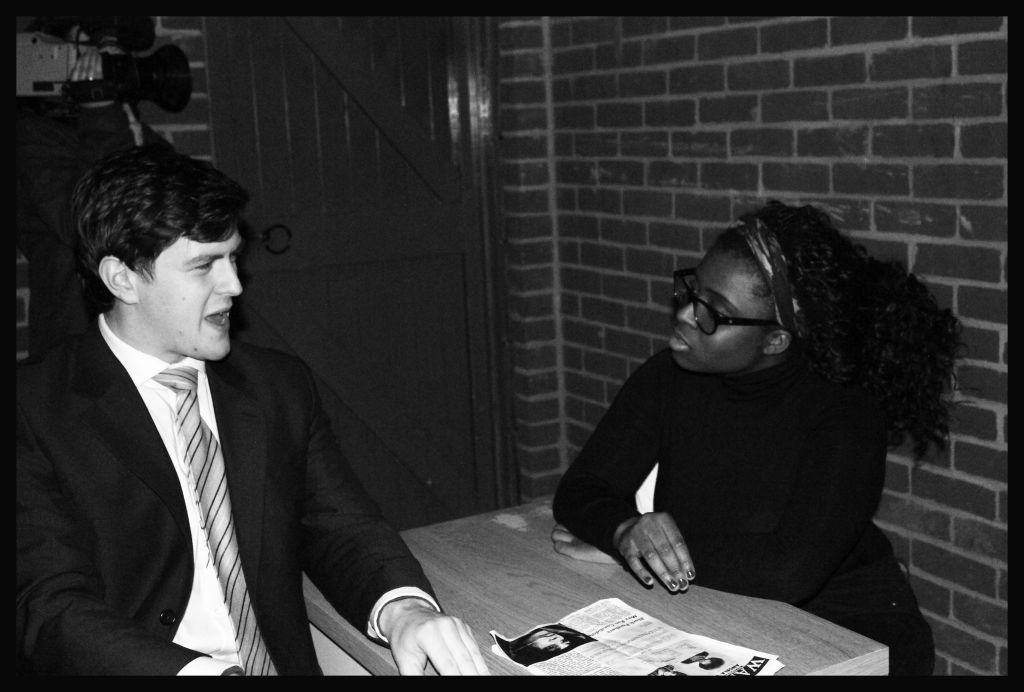 That said, my favourite scene was actually the one in which I was least ‘immersed’. In ‘The Woman Who Cooked (…Her Husband)’, we were sat in rows that took up most of the room, and Ola Forman (as the loyal wife, Hilary) and Miranda Evans (the mistress, Laura) were cramped into a small corner of the kitchen — although at one point they were both sitting on the laps of those in the front row. Forman and Evans both had impeccable comic timing, but what made the scene most enjoyable was their control of pace and tone: in the way they transitioned between interacting with each other and acting around each other. At times the characters were completely unaware of each other’s presence and would talk directly to the audience; yet, even when doing so, they were inhabiting the same space. As we walked in, Laura was applying what looked like Hilary’s pancake mix with a spatula to wax her legs: each of them could only ever exist around the other. Laura’s line —“I didn’t tell her I’d love her forever, he told her that”— poignantly and wittily summed up their shared position. This clever juxtaposition allowed them to accelerate a two hour play whilst stylishly fitting in the action — including a divorce, a marriage, a dinner party, a sort-of-murder, and a lot of cooking — into one short scene.

Another fantastic performance was ‘An Interview with Angela Davis’, set after the controversial Black Panther take-over of Marin County Courtroom in 1970. The scene began with us outside–director (and writer) Rossana Ellui had us positioned at the same angle as the cameraman (Hayden Munt), following his line of vision looking into the cell. We followed Munt inside, where an interviewer (Ed Wing) questioned Angela Davis (Mofe Akande), patronisingly insinuating her (claimed) involvement in the take-over was for personal rather than political reasons (in 1972, after 16 months of incarceration Davis would be determined not guilty of any involvement in the take-over; throughout, she maintained her vocal support for the black panthers and the Critical Resistance prison abolition movement). Akande and Wing’s partnership was nicely handled: Akande replied to Wing’s bluster with a strong self-confidence, convincingly giving off a sense of being in control and being sure of herself and her ideas. In the face of this Wing’s interviewer began to doubt himself. Towards the end of the scene, neatly, the cameraman started to focus exclusively on Angela Davis, as the interviewer repeatedly and comically tried to reassume his central role as presenter and reestablish some sense of ‘moral superiority’. The scene was well-plotted and well-handled. 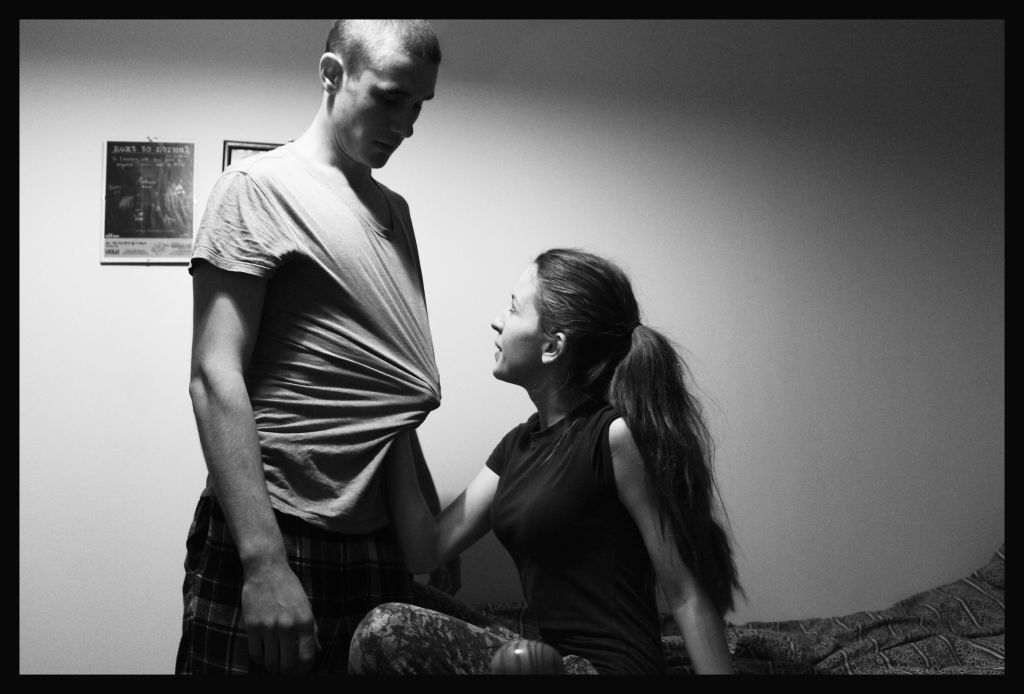 I particularly enjoyed Hansy Shore and Roíse Anne’s relationship in ‘The Acid Test’. Anne’s scattiness and quick changes of mood and temper were entertaining and endearing, whilst Shore portrayed a funny mix of boredom balanced with irritation in the start of the scene — more interested in her phone than her hysterical friend — with which it was easy to sympathise. Mercedes Bromwich and Alisha Iyer’s relationship in ‘An Improbable Family’ was deftly managed in a very different way: between them they managed to create a sense of serious affection and tenderness.

Again very differently, the sheer sustained energy and intensity required by Benjamin Teare and Izabela Karamon in ‘Tender Napalm’, and Bex Parker-Smith in ‘The Surprising Germination of Andrea Fitzgerald’, was impressive in itself. Parker-Smith’s fifteen minute monologue was maturely handled, with a real sense of sorrow and desperation. The scenes presented were hugely diverse, all depicting lives lived in entirely unique ways. It wasn’t just that they were well-performed, but the scenes presented challenging, modern, and above all interesting characters and relationships. Being experimental in set-up, in a house rather than some immersive-theatre space of a customised warehouse, and with the large number of scenes each working in totally different directions, it was a little hard at times to engage completely with each scene. That said, the scenes were both affecting and enjoyable, and as a whole the show was not just a success, but something exciting and new from UCLU drama.