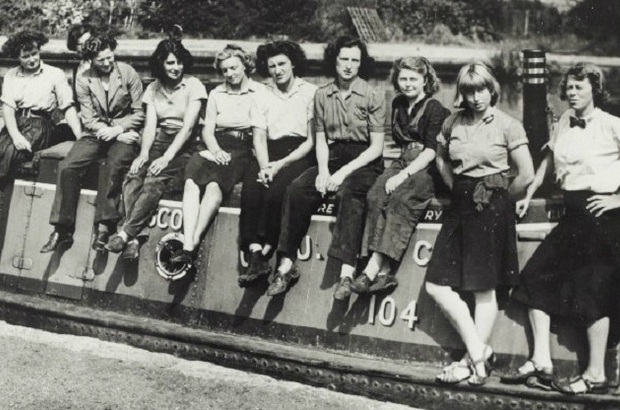 In a sparse room tucked away next to the Limehouse Basin in Canary Wharf, actors Heather Wastie and Kate Saffin take on the most significant event of modern British history, one that is engrained in our national memory: the Second World War. Far removed from the traditional narratives of bloodshed and men in trenches, The Idle Women offers us an entirely fresh perspective. Through the course of this two-part show, the duo narrate the lesser-known story of the Idle Women of the waterways.

During the war, a handful of women were recruited to the Women’s Training Scheme where they were given hands-on experience in handling 72-foot diesel-powered narrowboats and navigating the country’s canals and waterways. This coterie of girls, some of them barely out of school, contributed to the war-effort by transporting 50 tons of coal per boat from London to Birmingham via Coventry.

Alarum Theatre’s The Idle Women; Recreating the Journey has embarked on this same 320-mile odyssey aboard the original single motor craft, ‘Tench’, built in 1936. Mooring at different waterside spots along the way, the actors recount the experiences of their predecessors 75 years ago and the story of the misnomer ‘Idle Women’ – for idle they most definitely were not. Through a one-woman-play and a collection of poems and songs, Wastie and Saffin bring to life the reality of lighting fires, crossing locks, using buckets for toilets, sharing tiny cabins, hauling boats through ice in winter and making endless cups of cocoa. Unsurprisingly, conditions proved too tough for many crew-members who deserted the boats after a matter of days.

The first of the two pieces, Isobel’s War, sees an energetic Saffin move seamlessly from daughter reading her mother’s wartime diary to Isobel herself being accepted onto the Women’s Training Scheme. This is a versatile play that emphasises the backbreaking work and sense of adventure in equal measures. Offering a glimpse into the niche canal community in presenting older traditionalists such as the territorial Mr Carter, the production is overall a tender portrayal of boaters and their way of life. Beyond this, it is a socially engaged vehicle, laying bare the social division between the usually middle-class women and the boating community that Isobel’s mother imperiously describes as ‘illiterate and dirty’. Isobel’s War derides this prejudice whilst also revealing the role of the war in beginning to dissolve these boundaries. Isobel goes from anxious novice to capable captain whose journey is cut short only by pregnancy.

In the second half of the double bill, Worcestershire Poet Laureate Heather Wastie weaves the verbatim words of the Idle Women, lifted from books and archive recordings, into a series of evocative poems and songs. A master storyteller, Wastie narrates several of the women’s feats including a hurricane-like event that obliterated their vessels. The poetry is powerfully delivered and the ballads are accompanied with an accordion and a wonderful sense of humour. At times we are asked to close our eyes and set the scene – at others to get involved and sing along.

Although by the end of the evening the audience is no closer to knowing how to manoeuvre the hefty narrowboats, they’ll be familiar with the difference between stemming and breasting up. Idle Women presents a fresh and fascinating side of the weathered war story, bringing to the surface the tales of these women, generally unrecognised as a part of the war effort, yet undoubtedly hard as nails.

Alarum Theatre’s The Idle Women is on its nation-wide tour until August. Find more information here.