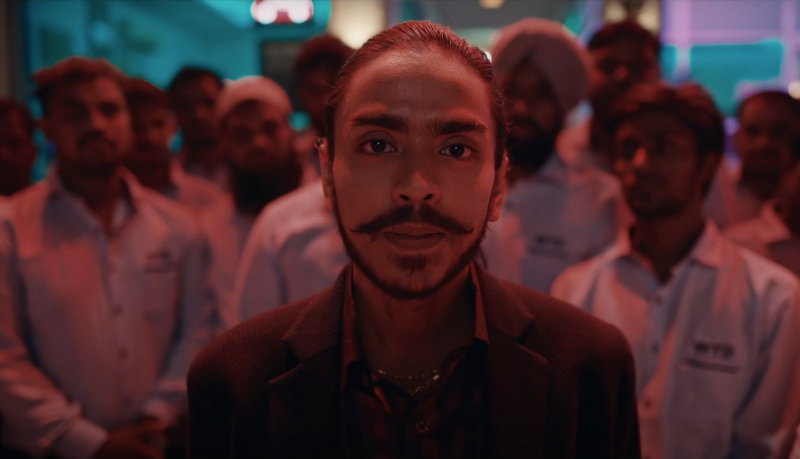 Ramin Bahrani’s phenomenal The White Tiger offers an interior perspective on Indian life from a multitude of angles. Following the life of protagonist Balram Halwai (Adarsh Gourav), the film explores the disparity between the affluent and the impoverished, shining a light on the injustices of the Indian caste system and the lengths those at the bottom will go to in order to change their fate.

At school, Balram’s intelligence earns him the title of the ‘white tiger’, one who comes along only once every generation. Yet, his family’s extreme poverty prevents him from pursuing his education, and he is left to follow the path of his predecessors, destined for a life of poverty. Desperate to change his fate, he becomes a chauffeur for Ashok (Rajkummar Rao), the village’s landlord’s son. Using his charm, ambition and entrepreneurial flair, he secures a job that propels him out of his previous state, culminating in his position as an owner of a  taxi company.

With Danny Bensi and Saunder Jurrians’ authentic soundtrack and the vibrant landscapes, the film offers a rich immersion into the multi-layered world of contemporary India. From the skyscrapers of Delhi to the slums of Laxmangarh, the film paints a vivid portrait of a globalised nation, yet one which is crippled by social and political corruption. Balram’s experience shows how polarised Indian society has become, and how the ever-widening divide between the rich and poor can destroy lives.

In an attempt to convey the universal quality of the film’s conversations, Ramin Bahrani’s direction ensures the film is carefully constructed to bring the audience as close to its protagonist as possible. As he writes an email to Chinese Premier Wen Jiabao, Balram’s witty, unapologetic autobiographical narrative compliments the darkly satirical tone of the film. We both see and hear Balram’s experience, witnessing both the light and the darkness, and are offered an intimate glimpse into the rationale behind the decisions he makes. The cinematography skillfully brings us closer still to Balram; at key moments of the film, such as when he realises he is being used by his employers, the close-up shots focus our attention on his differing facial appearances to illuminate the workings of his mind and his maturation from naivety to cunningness.

The compelling storyline only adds to The White Tiger’s dramatic quality: traversing the present and the past, we see Balram at both extreme poverty and extreme wealth; we know something dark is determined to happen from the film’s inception, although it is kept covert until the final part of the film. The anticipation of watching Balram gradually forge his plan for self-promotion throughout the film’s trajectory is testament to Bahrani’s accomplished direction and Gourav’s polished performance. As he authentically conveys the abundance of emotions Balram experiences – from cheerful pride to terrifyingly fierce rage to moments of pure hysteria – Gourav constructs his character so that the audience can scarcely anticipate how he will react to the various barriers he faces, making for a spine-tingling experience.

Admirable, certainly, is Balram’s entrepreneurial spirit and burning determination to change his fortune, and one finds oneself rooting for him on several occasions during the film. Yet, as the film progresses, he becomes an increasingly dislikable character s. There is something intrinsically unsettling about the way in which he earns the status he holds in the present day, the status that leads him to simultaneously tell his story to both the Chinese premier and to his audience. It is this discomfort that underpins the entire film.

Balram does not attempt to alleviate himself of the gravity of his actions, but rather presents his story as an honest depiction of the Darwinian ‘adapt to survive’ sentiment, a  sentiment that plagues those who know they must be willing to do anything to claw their way to the top. In a subtle denouncement of Slumdog Millionaire (2008), Balram states ‘Don’t believe for a second there’s a million-rupee game show you can win to get out of it.’ Foregrounding the dark choices he will make over the course of the film, this conveys the inevitability of his experience: he justifies his actions to his audience by stating that they are his only choice for escaping poverty, attributable to the harsh reality of the Indian caste system.

Much like the class politics highlighted in Bong Joon-ho’s Parasite (2019), Balram feels the need to disregard his competition; just as the Kim family remove the Park’s workers with deceit and manipulation, Balram informs on the ‘number one’ driver and subsequently fills his place. He sees his competition not as his ‘superiors’ who perpetuate the injustices he faces and maintain the caste system that has been a source of irrefutable restriction on his family, but as the people who, like him, are climbing their way out of poverty. This highlights how ingrained the affliction to brush aside those who suffer from the same predicaments is, whilst the corrupt individuals remain strong and powerful. Initially, it is Ashok and his wife Pinky (Priyanka Chopra Jonas) who become figures of the hypocrisy that underlies the wealthy elite: whilst trying to detach themselves from the caste system by reprimanding their relatives for their horrific treatment of their servants and taking Balram under their wing, they perpetuate the very same ideals when reinforcing the disposability of the lower-caste when it is in favour of preserving their own reputations. Yet, Balram  adopts this level of hypocrisy himself as he becomes a product of the same corrupt institutions he once despised. His entrepreneurial spirit is driven by the very system that restricted his family to the poorest of lives and prevented him from succeeding; by escaping the life he was destined to lead, Balram simultaneously changes his narrative and reinforces the corruption he was once a victim of.

We cannot conclusively determine whether Balram feels a level of guilt or remorse for what he has done. This inconclusivity is not a flaw, but is rather a poignant representation of the debate at the heart of the film: to what extent can we forgive a character’s actions when they are driven by a desire to have something more than what he is destined to have, especially when they are arguably a product of systemic injustice? The lengths Balram goes to, framed within the injustices of the contemporary Indian context, causes the viewer to contemplate whether Balram’s actions are justifiable on the grounds of his undeniably unfair situation and the fact that he is very much a product of his environment. Or, are we to conclude that his story is acutely comparable to the corrupt attitudes of Ashok and his family? Cleverly, Balram tells his story with hindsight; taken out of context, his story seems unforgivable, yet showing us his former life leads us to concede to the fact that his behaviour can be attributed to the necessity to make brutal sacrifices in one’s struggle to the top. It is a debate that lingers with the audience long after the credits roll.

At the end of the film, Balram tells us he has successfully escaped the ‘chicken coop’, a symbol of the enduring poverty of the Indian underclass. He has experienced both the light and the dark, and we are left to question: at what cost? The final shot, however, reminds us that there are so many others who remain trapped in the coop, just as Balram once was, a final allusion to the transience of Balram’s success and the cyclical nature of corruption that will always threaten to reinstate his fate upon him once again.