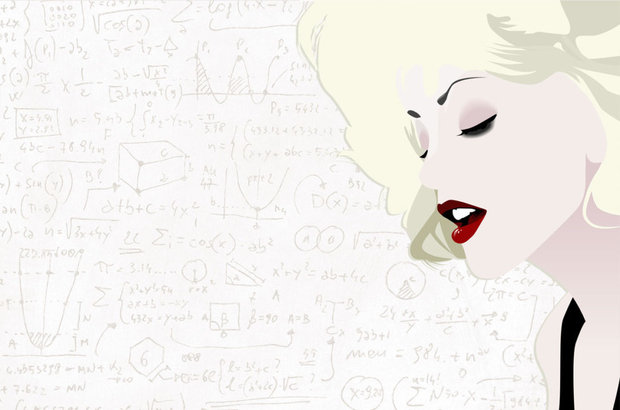 Despite being 35 years old, the timeless quality of Terry Johnson’s Insignificance is proved by David Mercatali’s new production. This is due in part to the play’s simplicity: it takes place in a single hotel room, with only four speaking roles. The real excitement, however, lies in the unlikelihood of these characters’ congregation. Marilyn Monroe (Alice Bailey Johnson) suddenly bursts into none other than Albert Einstein’s (Simon Rouse) hotel room to simultaneously seduce him and prove her understanding of special relativity. On top of this, Senator McCarthy (Tom Mannion) chases The Professor throughout the play with threats of exposing his ‘un-American activity’, whilst Joe DiMaggio (Oliver Hembrough) understandably intrudes to find out why his wife is in bed with a 70-odd-year-old theoretical physicist. Loosely based on a rumour that circulated after actor Shelley Winters insinuated the couple’s affair in her 1980 autobiography, the scenario sounds incredulous and amusing, because it is—and it works fantastically well.

The first impression one gets of this production is from its engaging set design and the perfect execution of light and sound that complements this. Music is used sparingly, often to add tension but never to replace the atmosphere or emotion, which always comes from the characters themselves. Insignificance is not a visual spectacle, but this allows the occasional scenic shift to occur all the more effectively: towards the end of the second half there is a sudden burst of energy involving vibrating lights, loud gusts of wind and a shaking stage; a subtler moment is the opening of the second half, at which point Marilyn Monroe is shown waking in the hotel bedroom—the lighting so convincingly imitates sunlight streaming through the window that the audience seems to have been led not only into the physical space occupied by the play but the temporal space also.

The play touches upon many subjects but never seems to specify a raison d’etre. The program contains an interesting three-page excerpt from an article titled ‘The Creature from the Black Lagoon: Marilyn Monroe and Whiteness’, which ends with the sentiment that ‘Monroe was not a feminist’. To believe that the play is primarily concerned with Monroe in relation to feminism would be a mistake however. Throughout the short hour-and-a-half, topics both big and small are introduced or alluded to, including special relativity, fame, nuclear warfare, imperialism, sexuality, family, psychoanalysis, mental health, and many more.

The point of all this seems to be to reveal some kind of humanity underneath the sea of discussion; to reveal there is significance to things which seem insignificant. You wonder during the special relativity explanation scene why such a scene is in the play at all, why so much time is taken up teaching the audience scientific theories. In hindsight it may be that the content is not the focus, rather the character’s behaviour and emotions are: Monroe’s animation, excitement, and desire to prove herself; Einstein’s initial scepticism, curiosity, and final acceptance. These are feelings we all experience but they are being presented to us in the form of two of the most recognisable figures of the 20th Century, urging us to look beyond image, name, and significance.

If at any point you find yourself questioning the revival of a play from 1982 then the modern poignancy of these themes provides an answer: particular lines seem to resonate even more strongly now than I imagine they did on first performance, for example when The Professor claims ‘I begin to dislike this country [America] more than my homeland [Germany]’. We are becoming more divided and estranged from the true meaning and importance of humanity than we were in the 80s—possibly even as divided as in the imperialistic and warring world of the early 20th Century.

With no gimmicky visual effects to fall back on, the production excels in the most essential aspect of theatre: acting. Every character is believable and sympathetic, a testament to Johnson’s feat of bringing together four figures from reality into a situation that could only be imagined. The actors and actresses make it seem perfectly natural to see Monroe and Einstein discussing the shape of the universe, or Joe DiMaggio arguing with Senator McCarthy over the feasibility of solipsism. All in all, Insignificance is certainly significant, both in terms of writing and the timing and execution of this production. Despite this there is a difficulty in pinpointing exactly what the production is actually about.  With such enigmatic lines as ‘Insignificance doesn’t happen’, such unlikely scenarios, such a broad range of themes and such a mixture of sincerity and comedy, Insignificance will leave your mind reeling, regardless of the enjoyment it instills.

Insignificance is running at the Arcola theatre until November 18th. Find tickets and more information here.

Featured image courtesy of the Arcola.