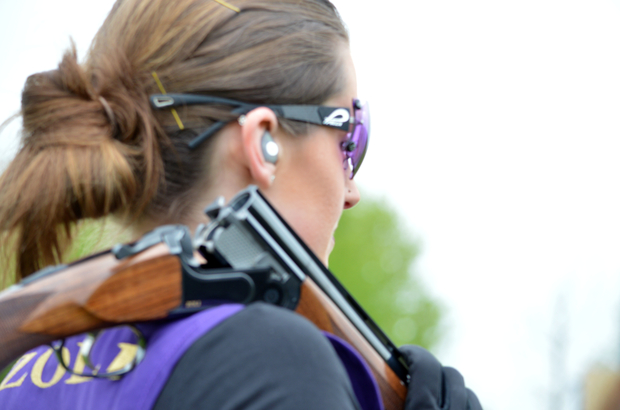 FAYE WILLS, a leading clay shooter, discusses how her accomplishments in the sport have been devalued based on her gender.

Faye Wills started shooting when she was 16, and at 19 represented Kent at the South East Regional and National Inter-Counties Championships in the discipline of English Sporting. She has regularly won regional competitions and corporate shoots in the ladies’ class, often equalling or bettering the scores in the mens’ classes. In 2016, Wills represented Kent again, this time in two different disciplines – English Skeet and Olympic Trap. In October of that year, she attended a Talent Identification Day for British Shooting, and after she was invited to join the training programme for Olympic Skeet, which she is currently on. At a recent competition, she came 6th overall in the British Shooting skeet group and 2nd in her level of the programme.

As a clay shooter, you come to expect a lot of negativity and questions, but you’re never fully prepared for the causal misogyny and chauvinism that seems to pervade the sport. My gender has always been used a target to denigrate my accomplishments.

After recent competition where I had taken ‘High Gun’, the highest score, I walked to my car only to overhear a boy of maybe 11 or 12 complain that he had been ‘beaten by a girl’. I wondered how his father would reply. He simply replied: ‘We all got beaten by a girl’.

It was at that moment that I realised being good at my sport was not what mattered. What annoyed him was the fact I was a woman. I very much doubt he would have been so annoyed had I been a man; I do not think he would have questioned my victory at all. Sadly, this is neither my first nor last experience of sexism in sport. Being good at my sport was never what mattered; it was always the fact I was a woman.

Too many times have I heard that phrase ‘not bad, for a girl’. In such a male dominated sport, I honestly cannot say that I am surprised. Women in sport face misogyny on a regular basis, and it it is not just the off-hand comments. Misogyny pervades all areas of the sport – most notably relating to pay and media coverage. Women should not have to try twice as hard and achieve twice as much just to be worthy of a mention in the media, or to be considered suitable candidates for sponsorship.

The most obvious example of this institutionalised chauvinism is the ever-present pay gap. I need not remind you that while top male football players such as Cristiano Ronaldo could live comfortably for a year or more on a week’s salary, their female counterparts make their living working ‘regular’ jobs. Even in my sport, where only a handful of athletes actually get paid to shoot, the prize money for Lady High Gun is always lower than that for which the men compete, even though everybody shoots the same course.

As a result of this, sponsorship remains unfairly distributed. It has recently been proven that only 0.4% of all recorded UK sponsorship deals are for women athletes or teams. How are we supposed to encourage young women to get into sport if we are unwilling to support the ones already competing at the highest levels? Crowdfunding, whilst a viable option, is controversial, and does not always produce the exposure and support one requires. So where else can we, as serious athletes, turn?

Moreover, media coverage is seemingly a means of reinforcing the male norm. Women’s sports make up just over 7% of total UK sports media coverage. Take at the sports section of your local public newspaper and look at the quantity of women athletes or teams that are covered. How many issues feature a woman on the lucrative ‘back page’? Listen to the radio and take heed of how many women’s sporting achievements are celebrated at all, let alone first. Watch the television, and pay attention to how many women’s matches are shown, what channels they appear on, and how many of these athletes are subsequently interviewed.

In the recent Rugby and Cricket World Cups, the women’s rugby team reached their final and the cricket team won the cup. Yet this still was not enough for sports sections to showcase their achievements – men’s league football dominated radio and television reports . I feel incredibly lucky to have graced half a page in the sports section of my local newspaper when I was training this year. It should not be that way.

It often seems that the only way women are portrayed in the sporting world is in a way suitable for male sexual objectification and male gratification. Women competing in the scanty bikini-type lycra of athletics competitors and the actual bikinis of volleyball players, as talented as they are in their respective sports, are the subject of much media discussion and spectacle. There is an unrealistic expectation that a woman, no matter how good she may be at her sport, can only ever be equated with how her body looks while she competes.

It infuriates me that my ability has been defined by my gender, and – more significantly – that young boys are still raised with the inherent concept that being beaten by a girl at a sport is a bad thing. We continue to raise our young men with the notion that girls are not supposed to be good at sport, and our girls with the idea that they cannot, and should not, be pursuing achievements in sport.