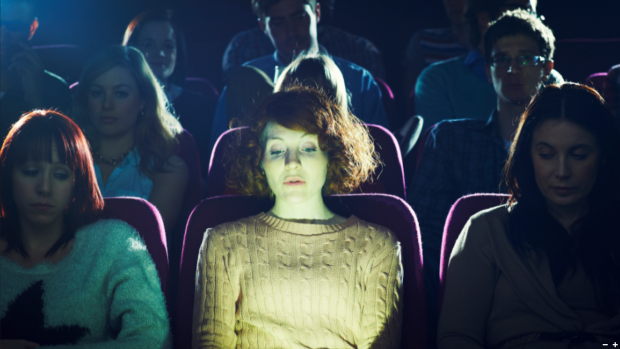 ‘Human sacrifice, dogs and cats living together, mass hysteria!’ So Bill Murray’s Peter Venkman PHD screams in the face of the New York mayor in Ghostbusters. It’s hard not to react in the same way to AMC chairman Adam Aron’s statement that the American Multiplex chain is considering mobile phone-friendly screenings.

This is, put simply, a base pandering to the laziness of a group of people unable to participate in something without instagramming the shit out of it – and nothing more than an indulgence of idiocy. It is also a patronising assumption about the lifestyle of the cinema-going public. Not since the contents of Thomas Becket’s skull were spilled on the steps of Canterbury Cathedral has a sacred place been quite so profaned.

With respect to Aron, this is the culmination of a process that has been going on for several years now; it is also the final straw. The past ten years have seen the moving of ushers from inside screens to behind sweet stands, the inflation of ticket prices, the saturation of blockbusters across the board, and increasing tardiness amongst cinema audiences. And it’s important to realise that the last factor is heavily influenced by the first three: if cinemas don’t care about the way we watch films, why should anybody else? Do audiences really want to use their mobile phones in screens, or do they just think they can do it because everyone else does?

Maybe that’s a fair point, but this doesn’t mean that AMC, or any cinema chain, should be pandering to this attitude. Quite frankly, I think we should be taking people who text in cinemas and cutting their left arm off at the shoulder. And then we should be dumping their still writhing corpses in a steaming pile in the lobby as a warning to anyone else considering trying it on. How people live their lives is irrelevant to how they should act in the cinema; it is a separate place, and a shared place that demands respect. For some people dogging is ‘part of their life’ – but that doesn’t mean we should be letting them do it in the cinema.

Watching a film is an experience that all those in the cinema should go through together. Whatever may have happened to each member of the audience during the day, they are brought together by the film. They may have wildly different experiences of it and incredibly disparate views about it – and they will all be incredibly different people – but the cinema levels all this out.

I genuinely believe that going to the cinema is, and should be, an incredibly powerful experience. I go to the pictures almost once a week now, and I still get the excited feeling every time the lights begin to dim that I did on my first trip 15 years ago. That moment is magic. The arts are taking a right whacking all over in current times, in politics as well as in education, and the cinema does not need to add to this by telling people it doesn’t want to be taken seriously.

I realise not everybody will have the same opinion as me. But the problem is that I know I’m right.

Why is cinema any different to the theatre? Phone usage isn’t half as much a problem there as it is in the cinema. The notion that theatre being a ‘live event’ makes it more easy to respect is beyond daft. Does it really take a person physically standing in front of you to suspend the act of texting? Or maybe it’s the cost; a £12 ticket in your local Cineworld isn’t the same as £30 a pop in the West End. Cinema’s affordability means lots of people go to the cinema. But mass-appeal shouldn’t make cinema chains lower their standards – and popularity shouldn’t make them sloppy.

The truth is that mobile phone-friendly screenings will not stop people texting in non-texting screenings; the people who cannot make the times of those screenings will just go and text in other showings. This commercial venture will also worsen the cinema-going experience by encouraging bad behaviour that will, in time, spread across the board.

I’m often told that people who text in the cinema have a good reason: a relative in hospital, a friend in need, or to keep up-to-date with work. That may well be the case, but if it is then you have to ask what they are doing in the cinema in the first place. If my mother was dying I don’t think I’d want to be reading about her coughing up her lungs in between bites of popcorn and glances at the latest Transformers flick.

Cinema etiquette is going down the pan and the last thing we need is for cinemas to start actively condoning it. It’s bad enough that they’re too busy flogging 3D glasses and popcorn combos to enforce their own rules. Now if you’ll excuse me I’m off to establish a swimming pool for people who want to urinate without having to get out the water.