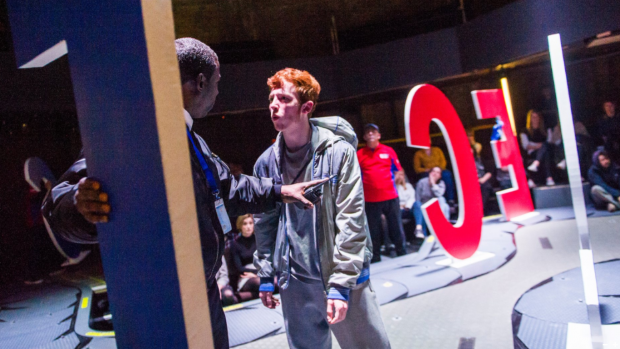 In the world premiere of Leo Butler’s Boy at the Almeida Theatre, our city is the central character; its waiting rooms, bus stops, self-checkouts, tube station barriers and road works. A conveyor belt worms around the circumference of the stage and props are constantly being added and taken away by crew members decked out in high-vis. The city is obtrusive, becoming an obstacle course for actors orbiting on the belt. As you crane your neck around objects to snatch a glimpse of the action, you may feel like cursing set designer Miriam Buether. However, not only does Boy’s use of the stage innovatively harness a potential energy that’s so often left to languish in the theatre, it creates a discomfort which is key to the power of the play. Bureaucracy, materialism, capitalism; objects get in the way and prevent audiences from seeing the boy at the heart of Boy – 17 year old waif-cum-stray, Liam (Frankie Fox).

Liam seems to be the child of a broken home. We never see his parents but judge, from the reference to zero hour contracts and Liam’s reliance on food banks, that they belong to the swelling ranks of working poor in the UK. We are told very little about Liam; the distinct lack of character development in Boy shouts of a determination not to allow a child’s suffering to become a spectator sport. Liam’s inner anguish is not disembowelled and served à la minute to us on a platter. Instead we are presented with a protagonist whose answers do not match the questions he is asked. You might be reminded of Pinter or Beckett but this is not absurdism – Liam simply understands that since no one is really listening, it does not matter what he says. He is lost amid a cacophony of complainants; cuts to mobility allowance, cuts to childcare, “you are not eligible”, “someone else’s responsibility”, “how am I supposed to live in the mean-time?” Butler paints a stark and all-too-familiar social landscape and in so doing asks the spectator a simple question: is this the kind of city you want to live in?

Touching upon issues such as squeezed social services, rent inflation, migrant labour, inequality and homelessness, Boy tempers a powerful political message with an affectionately comic presentation of Londoners. He shows how we love to know the route home better than Citymapper. How tube etiquette regarding food and drink goes out of the window on a Friday night. How self-checkout machines possess the galling ability to discover an ‘unknown item in the baggage area’. Living in 21st century London is presented as a technologically-driven experience in which mobile apps like Twitter, Instagram and Uber create a sense of freedom and interconnectedness. But when Liam’s seven-year old sister holds up her smartphone and asks “You know this thing has Skype – what the fuck do I need you for?” the damaging effects of virtual communication make themselves felt. Just as props clutter the stage, technology creates degrees of separation which obstruct meaningful interaction.

The effect of this is alienation, loneliness, and hopelessness, and Boy closes with Liam unable to respond to the doctor (Peter Temple) who asks him to imagine his life in five years’ time. Actors duck in and out, changing character around Liam, embodying his subjective experience of the faceless cosmopolitan masses that populate London. You leave the Almeida Theatre wanting to step out from the crowd; to stop and look a bit harder and care a bit more about the people who are milling around you; to discern through the babel din the voice and needs of a fellow human being.