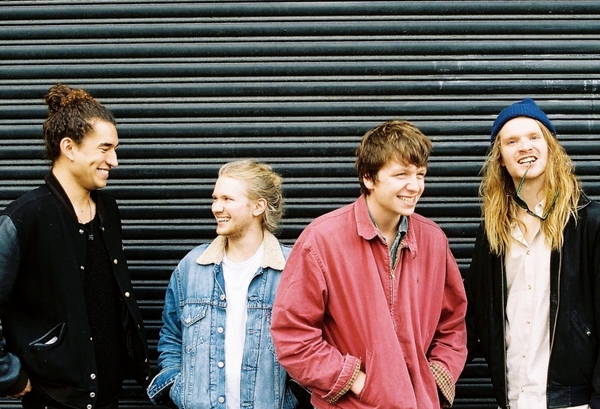 On the 3rd of May at Heaven, famed gay club and music venue, I see ISLAND perform a selection of songs from their EPs, including ‘Stargazer’ and ‘Come with Me’. ISLAND are an indie-rock band from London, comprised of Rollo Doherty, lead singer and guitarist, Jack Raeder, lead guitarist, James Wolfe on bass and Toby Richards on drums. Their two EPs have a soothing, atmospheric tone, which blends well with Rollo’s classic rock voice. The songs are instrumentally based with simple lyrics, and the band deftly straddle the line between heavy and understated rock.

Though UNCUT magazine has claimed that, for now at least, the indie genre’s presence in the charts is ‘dead, or at least sleeping’, ISLAND, along with other English bands such as Amber Run and Palace (both of whom ISLAND have toured with) show that we are still a nation to beat when it comes to indie-rock. I sat down with them a week after the gig to discuss the pressures and benefits of being an indie-rock band on the contemporary stage.

It all seemed to happen quickly for you – when was it that you formed the band? How did you meet?

2014: We’d been playing in a few other bands before that, but 2014 was definitely the beginning of ISLAND as it is now. We met through that, through friends in various bands and it then seemed like the obvious thing for us to do, to all join together and form a group. At the start it was a bit of a laugh; a side project that ended up better than what we were doing before.

It seems that grime and electronic music are at the forefront of music at the moment; do you feel timid going into the industry as an indie-rock band?

It’s true, but things like that happen in cycles. Indie definitely isn’t dead! We want to try and keep it alive, which makes it more exciting.

You are close with and have opened for Palace and Amber Run – do you find you learn a lot from working with other bands in your area, or is there an air of competition?

Yeah it definitely helps the process. Musically we have a very different way of doing things, but all of the other aspects… yeah you definitely have friends further down the line. We hadn’t done much touring before so it was very helpful to see bands doing it properly, and learning the ropes. Being friends with a lot of bands in the same bracket as us makes it feel like more of a group effort. I wouldn’t say there’s a sense of competition; it’s more like mutual love… for the bands we like at least! Sometimes at festivals and stuff we see the same bands again and give each other a little nod. Everyone’s doing the same thing so it helps.

I see you have recently returned from your European tour! What was your favourite city?

We got back end of March. Oh that’s tricky – all of them (laughs). But no, Berlin definitely, and Amsterdam is always quality. It was nice being away touring when it wasn’t freezing cold, and actually having nice sunny days. All the sunshine meant it was a very happy tour… smiles all round.

What is your aim for the near future having just finished your European tour – when I saw you perform at HEAVEN last Wednesday you said you’d just signed an album deal – have you written all the songs already?

Yeah very exciting – we aren’t sure what will go on in terms of old music, we’re taking a fresh approach but we’ve written most of the stuff. We’re still writing though, which is exciting, and we’ll be writing throughout the recording process, I think – but it’s definitely still in the demo stage at the minute.

It differs from song-to-song. Sometimes, the lyrics come first and not all of the song, and we will work to put it all together and then it will take a new form. Sometimes we all work together to create an instrumental and then add the lyrics on top. It always comes together quite organically. We don’t do it in the studio much, we sort of write whilst we play. They’re all designed for that ‘big live sound’. So we write for live shows and then try and capture that effectively through our recording – we definitely test everything live before we lay it down in a record.  We played a few songs that will be on the album at Heaven.

Do you have a favourite song released in the EPs?

[Pauses] It definitely comes in phases. When you write a song, you love it for the next week; then you hate it; then you record it and you hate it even more; then you take a step back and think ‘oooh, I could listen to that’ – and then you start again! It’s amazing – it can change across time.

[At this point, Rollo says that his favourite is ‘I’ve Been Searching’, and I confess that it is my favourite too. This sparked a debate amongst the boys, where they all spoke over one another, trying to discuss which song was their favourite and why.]

The thing with being in a band is that we lose perspective on all of our tunes – and it’s hard for people who aren’t in bands to realise we’ve heard these tunes so many times, and we still don’t hate them all that much yet. It’s a bit like an actor doing a really serious theatre show for months, doing it over and over again, everyday.

[At this point in the interview, James coughs, then apologises, stating ‘I’ve just got a cookie stuck in the back of my throat. Maryland Creations – I highly recommend them’, which leads to more laughter from the band, and myself.]

Sorry – anyway – did we give you an answer to which was our favourite song?

I’m just happy ‘I’ve Been Searching’ came up, so that will do!

Well yeah, the answer is we don’t have a favourite. But there are some songs that are really fun to play live.

Have you watched anyone play a cover of one of your songs yet, on YouTube or something? I feel like that’s a milestone for any band.

We’ve seen a funny dance routine to ‘Stargazer’, but it’s really good, by a guy called Ben. It was a remix, look it up. A lot of people have been messaging us asking for guitar tabs but we haven’t responded. Like, just work it out.

Do you want to release the music?

I mean, one of the big things we all did growing up was learn to play songs by listening to them. And maybe there are tabs online but I always thought tabs are things that fans make so that other people can learn it. I don’t think I’ve sat down and written the tabs. And if we did hand them out, people could sell them and make money I guess. If you want a band to tab their tunes, then you have to buy it. ‘The ISLAND Songbook, coming soon’; ‘Best of ISLAND’ to come…

I think that’s somewhat selling out… Do you think the hard work is paying off? Everyone seems to be talking about you – do you think you’re getting out what you put in?

Yeah I think it’s definitely getting there. I think the album will be a moment for us, because the EPs are like putting little ‘tit-bits’ of our sound out to the world. Now we can put forward a full, complete piece of work, then expand, a bit like a showcase of all our gigs.

So is the album going to be your main concern now, with touring taking a backseat?

We definitely like to keep the gigs flowing, but yeah the album is at the forefront of everything. We won’t be touring for a while, just going to the studio, writing, recording, mixing in the next few months.

It must be very daunting in such a corporate music world to start off as a young band. I guess you’ve been in the industry for a while now – do you think its manageable?

You can definitely let the fact that its daunting… daunt you, or weigh you down; but, at some point, which I think we’ve got to, if we just keep doing what we’re doing and put our hearts into it, it will go well. We’re not one of those bands that thinks we have a moment like ‘that’s when it happened’. It was more gradual for us. And, hopefully, if we just keep at it, people will eventually give a shit.

Approaching the album/EP, do you have a target audience in mind, or do you write what appeals to you and go from there?

I think we write what appeals to us – and we hope that if we like it, then some people will too. We never think like ‘let’s make a song for this type of person’, like ‘this one’s going out to the 49s’.

Now one last very generic question: what other bands or sounds have influenced your music?

I think there’s a lot of bands that we all listen to and love and maybe help us subconsciously, by allowing us to figure out what we like, but I wouldn’t say there’s anyone that we specifically cited or tried to copy. We’ve always loved Peter Green, that whole soulful rock-and-roll style. But I don’t think we ever listen to anything with a desire to recreate or emulate anything. We definitely have different sounds we try to create in our music, but it’s never anything conscious.