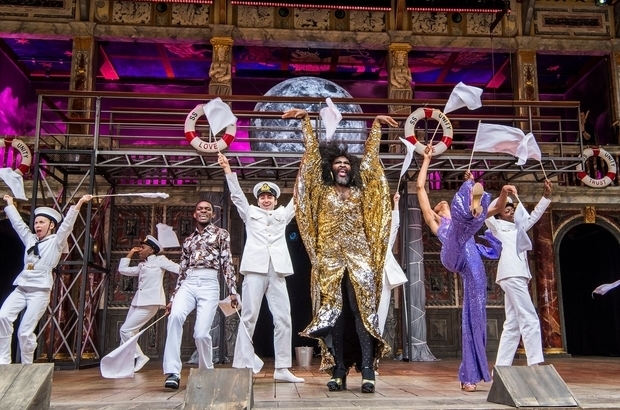 As is the case with much of Emma Rice’s work, in her Twelfth Night we are forced to question whether it is script or spectacle, the viewing experience, that makes a production worth seeing. We only arrive at words exclusively attributable to Shakespeare ten minutes into the show, preceded by a fabulous rendition of Sister Sledge’s ‘We Are Family’ sung by a gang of dancing white-clad sailors and the completely arresting Feste, played by Le Gateau Chocolat. As the number came to its close the inevitable sneers of the purists were drowned by the applause and whoops of an audience thoroughly and incontestably enjoying themselves. Twelfth Night is a comedy, and this is entertainment.

The story begins with a shipwreck and the consequent separation of twins Viola and Sebastian. Viola disguises herself as male ‘Cesario’ and works for Duke Orsino in his seducing Olivia, a woman in mourning for her brother while trying to maintain a semblance of order in her own shipwrecked home. As Viola woos Olivia on Orsino’s behalf, misunderstanding ensues, and a love triangle forms – the result is an inevitably humorous and messy denouement. Shakespeare had the ship wreck off the coast of the island ‘Illyria’, situated in Rice’s interpretation in the Scottish seas. Shakespeare’s choice of location gave the piece a distinctly timeless quality; Rice’s Illyria is set in the 1970s. Its specificity gives it licence to be intelligently playful.

One of the key themes of Twelfth Night is gender, and this production does do some work to explore this. Feste, the ‘fool’ character of the piece, providing the snippets of wit and riddled truths that other characters seem to lack is played here by a drag queen; gender performativity is made central and unconfusing by Le Gateau’s hypnotic execution of the role. A majority of Feste’s lines are sung in Carl Grose’s adaptation of the original text, and so occasionally the meaning is a little lost – but Le Gateau’s voice is exquisite and when he enters the stage in his glittering golden kaftan, he is all you see. Katy Owen’s excellent and overwrought Malvolio is another performance of gender, simply slipped into the piece without explanation. Though not massively complicated, the implication that everyone is everything, and that everything is a performance, gives the production its magic.

Other notable performances are Annette McLaughlin’s Olivia and Marc Antolin’s Sir Andrew Aguecheek. Watching Olivia’s inadvertent girl-crush bloom is convincing and uncomfortable, and Antolin’s ultra-camp, lisping Aguecheek bumbling around with boisterous and drunken Tony Belch (Tony Jayawardena) is phenomenally funny. It is fair to say, though, that Malvolio and Feste – and the contrast between them – steal the show.

There are a lot of musical moments in this production – perhaps too many. Toby Belch precedes one of his speeches with the lyrics to Gloria Gaynor’s ‘I Will Survive’, and the songs written into the script (and added by Grose) are all of that aural ilk. Orsino’s famous ‘If music be the food of love, play on’ is transformed from a letter into a smarmy rock ballad, played to Olivia on a cassette. The melancholy of lost family does get a little lost in musical gimmickry, and though greatly entertaining and enjoyable the transformation of speech into song does eradicate a little of the scriptural nuance. The lyrics aren’t always what we are focusing upon when the flamboyance of the choreography, or the flashing of the lights interfere.

Ultimately, this Twelfth Night is unlike any other. This may be owing to the massive additions and alterations to the original text – but so be it. Its playfulness and digestibility begs the question, what do we want from a night at the theatre? This may very well be it.