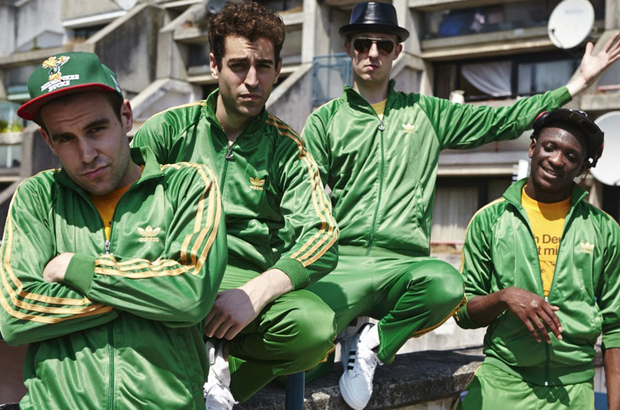 COLETTE ALLEN reviews Licensed to Ill at the Southwark Playhouse.

A musical about the Beastie Boys is not necessarily something you might expect much from, or so I thought on my way to Southwark Playhouse, tongue in my cheek and notepad left at home. Yet, Adam El Hagar (MCA), Simon Maeder (Mike D) and company put on one of the most enjoyable evenings I have had in a theatre this year with Licensed to Ill.

Audience members were only too happy to tell me all that I needed to know about the Beastie Boys; rule number one being that they never took themselves seriously. This playfulness was captured perfectly by Licensed to Ill. Welcomed to the theatre by a vision in lederhosen (a tribute to Adam Yaughts alter ego, Nathaniel Hornblower), an informal tone was established immediately. The sense of their blunt straightforwardness was only reinforced by the simple set, drowned in the iconic taggers stamps of 1980s New York, with a cast of just four in their t-shirt-dependent costumes.

This atmosphere is perfect for a Friday night: every audience member in the packed-out auditorium was having a wonderful time. These were the hard-core Beastie Boys fans, not those merely ‘fighting for the right to party’. These people appreciated the humour, the talent, the lives of the Beastie Boys. The songs evoked memories, brought back times and places where Beastie had provided the soundtrack. This night was the next pillar in a life where the Beastie Boys had been a constant point of reference. For the many who were brought up on stage throughout the performance, this was their chance to be one of the Beastie Boys. It was lovely to witness the extent to which this tribute was cherished. Even if there had not been such audience participation, the audience could not be ignored since they were as much of a feature of Licensed to Ill as the actors. Their appreciation was half the atmosphere.

The actors were no lesser fans of the Beastie Boys than the audience. David Foxsmith (Ad-Rock) himself admits in the programme that the Beastie Boys’ stories ‘taught me countless lessons as a creative person’. The enthusiasm they approached the performance with is essential for a show that doesn’t take itself too seriously. And fortunately, much like the Beastie Boys themselves, the ‘not-taking-this-too-seriously’ was backed up by substantial quality. Few appreciate the Beastie Boy’s significant contributions to Hip Hop. Their musical talent is evident in their original scores. El Hagar made sure he paid tribute to this in a scene portraying the creation of Paul’s Boutique–the Beastie Boys’ second album with the Dusty Brothers. The game-show format emphasised the respect the band had for their musical predecessors, as well as an acute knowledge of the technicalities of music.

Similarly, it would be an injustice to overlook the talent of the musician-actors in Licensed to Ill–a bassist, a guitarist, and a drummer. Their authenticity made the joking around all the more impressive: they weren’t joking to distract us from a lack of skill, they were uproariously funny and talented.

Entering the festive period this show cannot be recommended enough. Yet, we are also at a time when we need to be reminded of the truth at the heart of their joking. There is a scene early in the young band’s career where Ad-Rock turns to Mike D and admits that he ‘kind of hates our fans’. He is speaking here of the American Frat boy, not our Southwark audience. The generic ‘white guy’, as Tope Mikun’s t-shirt pointed out, who didn’t get the joke. This narrow-minded, insular character has become more apparent and dangerous in our world today. On the 20th of November 2016, Adam “Ad-Rock” Horowitz spoke at a rally against hate-crime held in the Adam Yauch Memorial Park, New York. The children’s park had been defaced with swastikas and pro-Trump slogans.

Horowitz made a good point in his speech: “Take what you are good at and what you truly enjoy, and lend your services to the causes you care most about”. It doesn’t matter what platform you are using or what scale you’re operating on, as long as you are leaving a positive mark on the community. Licensed to Ill has done this by honouring the Beastie Boys legacy, bringing in new fans previously oblivious to their work (yours truly), indulging old fans who craved another Beastie hit, and reminding people to remember the joke.

Licensed to Ill reminds us to “laugh with all your buddies because it’s a man’s world”.

Licensed to Ill is running from the 30th November to the 24th December 2016 at the Southwark Theatre. For more info and tickets: http://southwarkplayhouse.co.uk/show/licensed-to-ill/