ALASTAIR CURTIS reviews ‘As Is’ at the Trafalgar Studios.

In the darkness of the play’s opening the radio-taped voices of news reporters, healthcare workers and politicians create a wave of sound: crackling but sharp. The voices are shocked, bewildered, embarrassed; many are unsympathetic. The year is 1985 and the AIDS epidemic grips New York, infecting men and women with a virus that leaves doctors and their antibiotics floundering. In the same year William M. Hoffman’s ‘As Is’ premieres off Broadway. Coming before other AIDS plays like Kushner’s Angels in America or Kramer’s The Normal Heart, ‘As Is’ cuts through the hysteria to provide a clear-eyed dispatch from the epidemic’s frontline: a stark, personal report about the people affected by the disease and abandoned by their government. 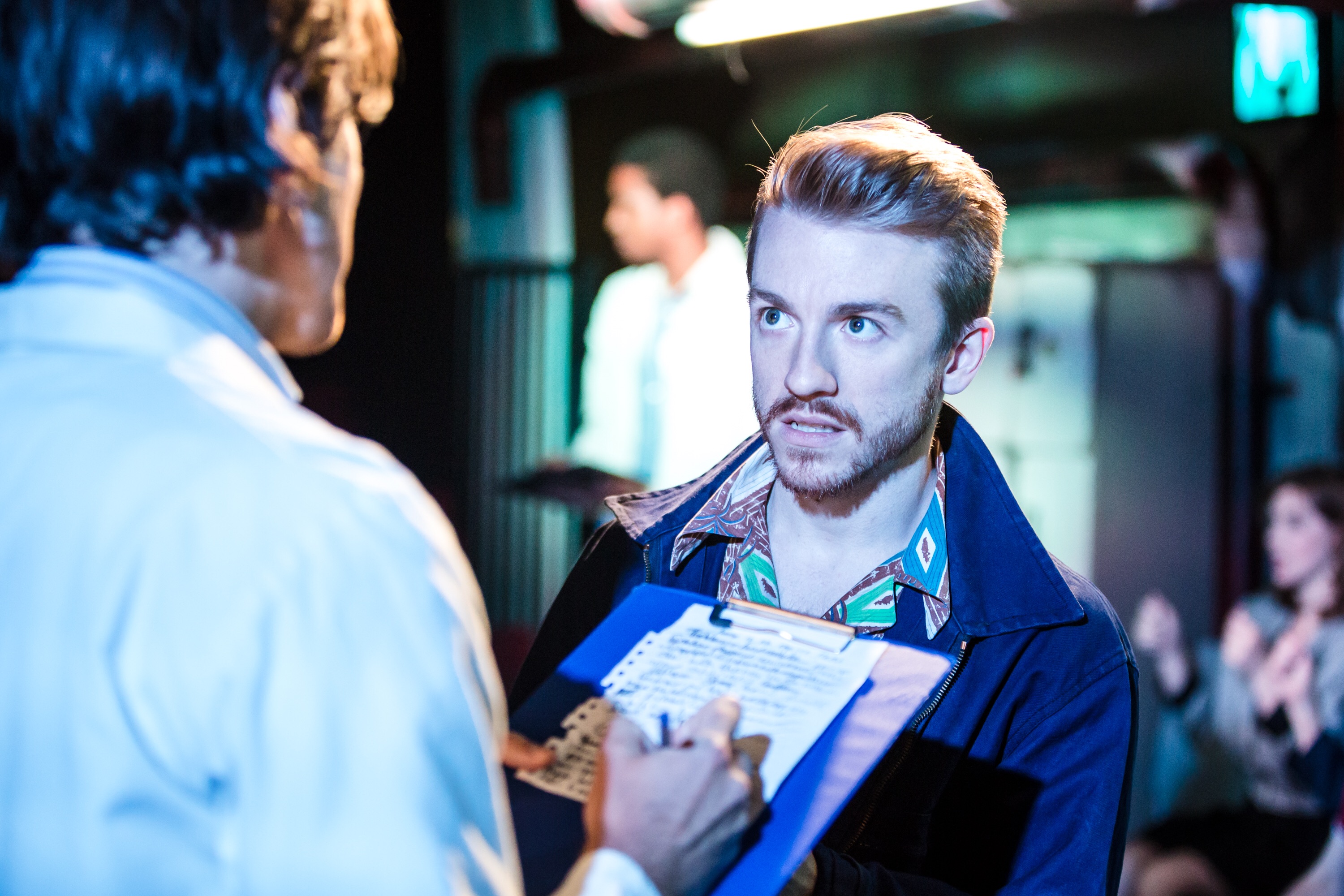 What makes Hoffman’s play so remarkable is its epic sweep. Tracing the spread of the epidemic across America, Hoffman peers into thousands of homes and hospitals so as to observe the effect of the disease on the men and women suffering its throes. Short, punchy scenes jolt the play from pulsating gay bars to sobering counselling sessions, which are knitted seamlessly together with news bulletins and interviews: a kaleidoscope of suffering. A chorus of men and women upstage serve to capture the pulse of the nation – they swap and change roles, weaving the experiences of AIDS-sufferers in with that of their families and the word on the street. Akin to the National Theatre’s 2011 production of the musical ‘London Road’, Director Andrew Keates stacks the chorus’ speeches one on top of the other to highlight common experiences amongst AIDS-sufferers. Roger, George, Jimmy. The names of the victims change, but the epitaphic words of their grieving families – ‘he was young’ or ‘he had a lot of courage’ – recur in a nightmarish refrain. Bright, talented, young. No one is invulnerable to the disease. A cough one week, dead the next.

Hoffman stands the America he saw in the 1980s on the Trafalgar Studios stage. He jabs it, studies it, then whips off the star-spangled flag to reveal its ineffectuality in the face of the AIDS crisis. But ‘As Is’ is also concerned with the smaller picture and the individual stories of the sufferers who make up the numbers. The play begins with ex-partners Rich and Saul picking their way through their flat, deciding who gets what. They bicker and flirt and then Rich, played with disarming wit by Steven Webb, reveals he is HIV-positive. Silence. He’s contracted it from his new fashion model lover, Chet (Giles Cooper). Silence again. It’s as if an hour-glass has been turned upside down; Webb’s performance changes, his charm evaporates and he becomes a sarcastic hospital patient, resistant to treatment and sympathy. Rich’s family quickly jump ship. The one exception is his straight, macho brother played with wide-eyed naivety by Dino Fetscher. He dresses in hospital scrubs to visit Rich (‘I’m not radioactive’, Rich retorts), but his brother means well. Under his arm is a scrapbook of newspaper cuttings about the AIDS crisis and on his lips is the resolve that a cure will be found. AIDS hangs in the space between the two brothers, awkward and fumbling, but they embrace and for a second it is all forgotten.

Because this is a play about love against the odds, ‘As Is’ teaches you that love can kill, but that it can also rejuvenate. Once pushed out in the cold by Rich, it is nevertheless left to David Poynor’s doting Saul to care for Rich, to take him ‘‘As Is’’. Cut adrift from the rest of the world, the disease brings the two of them together again. They cling to one another before the storm, ready to face death squarely. But Saul is not alone. In the eye of the crisis, against all expectation, there are people working on the ground, treating AIDS-sufferers with altruism, empathy, and compassion. Jane Lowe’s gin-swigging nurse at St Vincent’s Hospital may be a little negligent in her nursing role, yet you cannot doubt her altruism as she volunteers her time to ‘ease the way of those who are dying’. By contrast, there are the telephone operators (two savage turns by Dino Fetscher and Russell Morton), bitchy but well-intentioned in their advice. Then there is the Mexican hospital worker (also Russell Morton) who looks out for Rich and Saul. Though the death toll rises steeply over the play’s 80-minute duration, it is these characters, bumbling but well-meaning, that rake humour and warmth from the production’s otherwise unremitting tragedy.

‘As Is’ is showing at the Trafalgar Studios, alongside Nick Payne’s Constellations, until 1st August. Student tickets begin at £17.50.