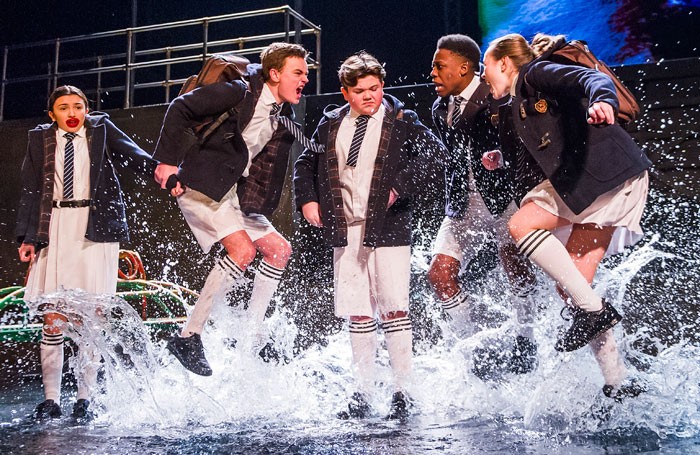 Wet-weather warnings are being issued for the Lyric Theatre in Hammersmith as Simon Stephens’ ‘Herons’ returns to London in a new production by Sean Holmes. Set around the Lee River in East London, Holmes has created a submerged stage for this bleak socio-political drama, reminding us that it’s possible to drown in just a few inches of water. Spectators in the front rows should expect to get wet as the characters wade through their emotional baggage and thrash about in the quagmire of a deprived inner-city sink estate. Outside of the splash zone, however, ‘Herons’ may leave you cold and unconvinced, but glad at least to get out of there home and dry.

Exploring how modernity perverts childhood, ‘Herons’ dramatises the aftermath of a young girl’s murder by a teen gang on the banks of the river. There are no white elephants on this stage, instead a gimlet-eyed youth opens the action by blowing up a female sex doll to represent the deceased, before the doll is discarded, to float like jetsam for the remainder of the play. Fourteen-year-old fishing enthusiast, Billy (Max Gill), is the son of the man who has turned the gang in. A year after the event, Billy is the punching bag of bully Scott (Billy Matthews), the younger brother of one of the convicted gang members. The abuse escalates as the anniversary of the crime approaches.

There are two peaks of dramatic brutality in ‘Herons’ and I confess that for both of them my concentration was broken by the smack of folding chairs and stage whispered “Sickos” as seats were abandoned. As someone who stood through the Globe’s infamously vomit-inducing ‘Titus Andronicus’ in 2014, I ain’t afraid of no gore. However, as Billy holds Scott at gunpoint in the second emotional apex, the river swelling and the water threatening to overwhelm the characters, I felt more-or-less blasé. As I overheard a defiant cockney voice declare in the bar afterwards: “I didn’t ever believe he was gonna shoot that kid!”

There’s something about this production that’s staid despite all of its commitment to swearing, drinking and drug abuse. It would be easy to put this down to the youthfulness of the actors, but the kids are alright, with Ella Mcloughlin particularly captivating in her debut role as Scott’s lewd androgynous crony Aaron. It’s the direction that falls flat. All the characters inhabit the stage all the time in this play, which means that seven people stand ankle deep in water for an hour and twenty minutes. Not only does this distract from and dilute the narrative, you find yourself worrying in a tedious way that the actors will catch cold. Another thwack of the directorial heavy hand is the screen which monopolises upstage right and onto which images of monkeys in the rainforest are projected. It’s like being in a bar trying to catch up with a friend when there’s a big TV behind their head playing music videos.

The core of Stephens’ play, that children today are no longer allowed to simply be children, is an important issue that audiences will leave ‘Herons’ thinking and talking about, which is all for the good. And if you dislike fresh-water birds but feel affectionately towards monkeys then so much the better. However, this reviewer would suggest taking along a waterproof.

‘Herons’ is playing at The Lyric Theatre until 13th February. For more information visit http://www.lyric.co.uk/whats-on/production/herons/