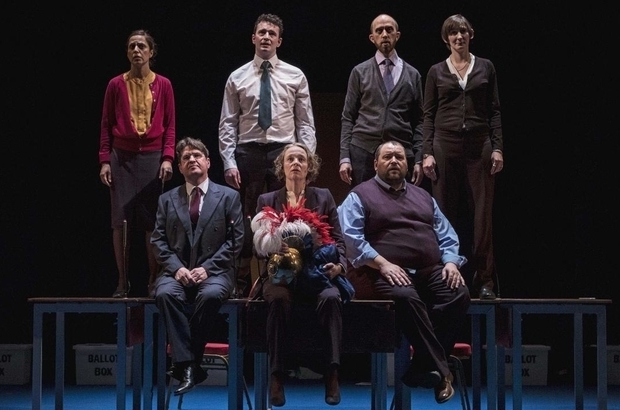 DANIEL LUBIN reviews My Country: A Work in Progress at The National.

The theatre was created to tell people the truth about life and the social situation.

Actor Stella Adler’s concept that the purpose of the stage is to speak to our lives and politics now could not be a more apt description of what the National’s My Country: A Work in Progress sets out to do. The semi-verbatim production draws on the thoughts and words of individuals spanning classes, ethnicities, and the country itself, as recorded in interviews taken directly after the EU referendum in June 2016. Regardless of however they voted or whether they voted, these voices express the contrasting attitudes of our country, discussing an issue that’s dominated media headlines for the last twelve months and more. Though enjoyable and well constructed with a combination of humour, light-heartedness and serious emotional content, My Country doesn’t quite achieve the neutrality or reconciliation it strives for.

The play is formed around the characterisation of six regions of the UK who express their inhabitants’ opinions, and a personified Britannia who quotes the speeches of those in Westminster. Through Poet Laureate Carol Ann Duffy’s compilation of these interview fragments, a great sense of equality is achieved. Early on, the audience, with houselights up, is acknowledged and implicated in the matter of the production. And as the audience is a group of individuals fundamentally involved in the subject, so our leaders are reduced to equals, equals with an opinion and a vote, having no elevated importance: as each region states the names of those whose words they will go on to recite, so Britannia reads the names David, Nigel, Boris, Jeremy, Michael and Theresa. Penny Layden as Britannia does an impeccable Boris impersonation, funny in its accurate absurdity yet retrospectively shocking in its content. There is something sinister in re-hearing these speeches in the post- rather than pre-referendum context – Cameron’s passivity and Johnson’s bizarreness have to be taken seriously in knowledge of the succeeding events.

Nonetheless the play does not quite achieve impartiality: with a mournful ‘judgement day’ as the votes come in, the personal attitudes of the inevitably left-wing creatives behind the project do to some degree shine through. Though equal weight is given to all voices regardless of political standing, it is impossible to express inherently racist speech without evoking some kind of negative judgement. As Niamh, 31, says, in today’s society ‘the worst insult that you can say to someone is, you’re a racist’. The play successfully and comically dramatizes the events around the referendum (as if they weren’t dramatic enough) and does frame the public’s voices well, but – maybe inevitably – cannot present any entirely neutral expression. Or perhaps it’s the reception – a liberally-inclined audience member will understandably interpret such views, however stated, as offensive or unsympathetic whereas someone of a more conservative nature might naturally agree. Or perhaps a much wider range of constituencies underwrote the choices made in this vote, constituencies whose specific griefs are hard to voice in words out loud, or whose concerns have even been distorted by the Brexit process itself. In this case though, My Country does not tell us much that we didn’t already know: the questions it asked provoke responses that tell us some truth about the vote, but it’s one we’re already familiar with, divided along familiar lines.

Though our understanding of political divisions is not greatly added to, the play is still interesting and insightful as such a range of opinions are given about such a range of subjects. The first interview, from Caledonia – subtly backed with a schoolyard soundscape – gives a case-study of wealth disparity, as the speaker’s school was owned by the richer academy across the way where the less well-off used to go to do swimming. The speaker recounts thinking of the other students ‘these are the masters’. Ruth, 68 (as printed in the program) discusses the impersonality of shepherding since mechanisation, how the sheep are ‘astonished when you arrive, whereas a shepherd in my time, they, they knew, they knew you’. Such nostalgia was common to a lot of the voices. Expressions such as Ruth’s give a greater insight into the social climate of the country, rather than our attitude to the EU or to immigration or to Brexit. Another interviewee discusses how they have come to feel isolated as a white Brit in a multicultural community. A sense and fear of change is quite general. The variety grows: a Northern Irish person deems patriotism inherently divisive; a young girl is scared of terrorists coming to Wiltshire (but you can’t trust the news because it gets the weather wrong); we are told that immigrants ‘have to want to be a part of the community’; ‘politicians don’t give a fuck about the people’.

This is the bottom line. The division was clear from the referendum; but in a clever twist on the bi-partisan division, what we are shown is a general attitude of dissatisfaction and anger towards our leaders. And as the other characters denounce politicians, shouting Britannia into a breakdown, as her flickering behind personas of Boris, David and Nigel shows her almost malfunctioning, we see how fragile our leadership is, shallow and lacking in substance and strength. Penny Layden finishes the performance with the pleading question ‘Do I hear you listening?’ The National is listening to the people – are the politicians?

The National’s My Country: A Work in Progress is playing at the Dorfman Theatre until 22nd March, when it will go on tour. Find more information here.