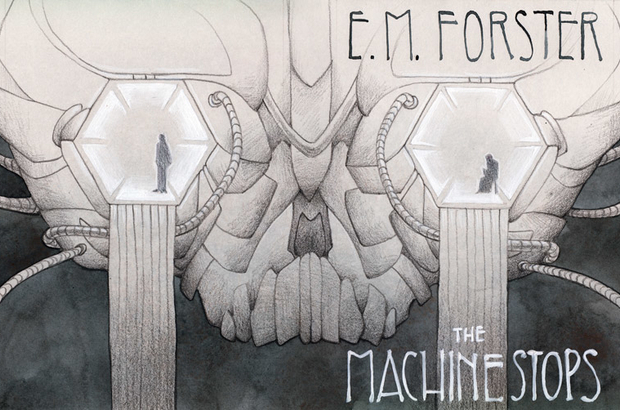 E.M. Forster’s 1909 novella The Machine Stops is a strangely prescient tale that predicted the pitfalls of our internet culture with surprising accuracy. But rather than applauding the far-sightedness of Forster’s original, Pilot Theatre must be commended for successfully turning Forster’s narrative to a nuanced critique of our digital age. The play is set in a dystopian alternate reality in which humans have abandoned the surface of the Earth and burrowed themselves deep underground. In small, windowless cells, each human’s needs are catered for by ‘The Machine’, a vast network of computers.

This is sci-fi at its bluntest. The play should be and is slightly ridiculous – the set looks a little like a Red Dwarf episode, and the characters are dressed up as though someone thirty years ago was imagining the future – in fact, think Back to the Future Part II, only without the excuse of it being 1989. Yet once you manage to look past its slightly overeager tone and its crude analogy to the internet – ‘we’re all in the machine, man!’ says one mind-blown audience member to his friend as the curtain falls – Machine becomes a play of startling emotional depth that questions the cultural mainstays which we have all silently adopted.

The play’s look up from your phones message doesn’t come off as a sermon, largely due to the fact that the cult of the machine is so brilliantly built up through lead character Vashti’s worship of it. The parallel to our own lives doesn’t feel heavy-handed because Machine is so utterly correct. The postmodernists’s fear that late capitalist society ideologically contaminates the self to an extent unprecedented in previous societies, is surely brought to its total culmination in the omnipresence of the computer. Of course, we can all point to the practicalities of the Internet and the immense benefit to human life that it has brought about – but the production raises the valid point that computers have robbed us of our ability to connect fully with the physical world. This is staged through a kind of metal wire cage, through which Vashti’s son, Keno, climbs on top of as he manages to climb out of ‘The Machine’ – an excellent use of space to contrast intellectual liberation with the introspective trap of the machine – and having broken out, Keno dances around it in a moving celebration of the physical world.

It is as the machine begins to break down that the audience is forced to recognise the play’s relevance to their lives. What if computers just stopped, and the Internet shut down? Machine makes us realise our dependence on our devices, and its challenges to such a deeply-held, but nonetheless inherently modern belief felt like a truly authentic confrontation of our lifestyle. Compared to plays whose moral messages discipline us for our lack of awareness of recent case studies, current affairs and global politics, Machine hits us at our core because it challenges a computer-oriented lifestyle we are all guilty of.

In the early scenes, before Machine has got into its stride, the funny costumes and silly voices irked more than entertained. However, the narrative, once in full pace, was beautifully sustained: a colourful combination of lighting, dance, and superb acting.

Playing at Jacksons Lane theatre, the show is a must-see for any nerds, geeks or Instagrammers worried about their connection to reality. The Machine Stops offers a piercing revaluation of the lifestyle we have come to accept over the past thirty years, a pointed message that comes particularly strongly as it is shockingly and unavoidably personal.

Pilot Theatre’s The Machine Stops is playing at Jacksons Lane from 7th – 11th March as part of its tour that will continue until 8th April. Find more info here.