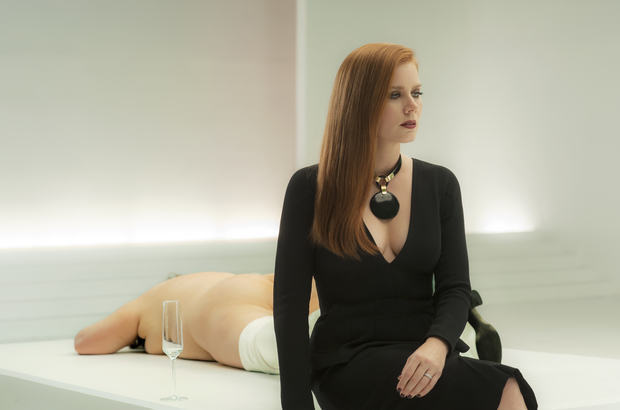 The deeper emotional malice of Tom Ford’s second feature film gets under your skin just as much as the explicit violence. Adapted from the 1993 novel Tony and Susan by Austin Wright, Ford has retained the double-stranded narrative of the complex thriller where a fictitious story runs in parallel with reality, forcing the audience to analyse the dark relationship shared by different levels of reality.

The story begins with a disaffected, wealthy gallerist Susan Morrow, played with cold sophistication by Amy Adams. We see her isolated life in a glamorous but reclusive house, talking to acquaintances about the love she no longer feels for her husband, and the imposter syndrome she suffers from in a privileged yet hollow life. The real drama begins when she receives a manuscript from estranged ex-husband Edward; the title ‘Nocturnal Animal’, once a playful nickname, has now a bitter implication. She immediately delves into the violent narrative set in West Texas as Tony Hastings and his wife and daughter make a long drive through Texas to Maine. The pitch-black Texan desert at night becomes the perfect setting for the ensuing events. Tension ratchets as the family encounter a group of men willing to run them off of the road on a small slight. With no phone connection, a broken tire, and no one else around, the family are forced to pay attention to the band of terrifying men headed up by Ray, played with devilish unpredictability by Aaron Taylor-Johnson.

We smoothly switch between the violence of the Texan scene and Susan’s empty home as she reads on, despite the unfolding brutal storyline. The audience are exposed to the savagery of the manuscript and further enticed by Susan’s willingness to continue reading. Small changes in her behaviour begin to emerge; the uncharacteristic kindness of giving an employee a second chance at work intrigues the viewer to question her recent actions. We grasp further insight into Susan’s mind through flashbacks that are carefully interwoven, adding another slippery layer of reality. They reveal the destructive break-down of her past relationship with the humble and sensitive Edward. We come to understand the change from her wide-eyed past self to her dark-lipstick wearing, well-groomed current self. The theme of dashed optimism typical of idealistic youth remains a crucial element of Ford’s works. Nocturnal Animals precariously unravels the dark parallels between the layered realities, creating a sense of insidious unease as we begin to understand the vengeful motivations of Edward’s novel.

Since Ford’s success with his first feature film A Single Man (2009) based on the 1964 novel by Christopher Isherwood, Ford has been constantly met by comments on the style of his films. However, he argues it is very normal for a director to be invested in the appearance of any particular scene; his job as a fashion designer turned director contributes to the meticulous attention to detail. ‘Style always has to serve substance. Believe it or not, I am not just about style, especially in filmmaking. Stylistically, I never made a decision that didn’t relate to the story.’ Indeed, his style is not only beautiful and distinct but also operates on another level: in A Single Man we are thrust into a nostalgic, glamorous 1960s; with Nocturnal Animals, we are met with the cold sleekness of present day. In both cases, style picks at the shield of outer appearances and the frailty of the individual beneath.

The anxiety and unsettling power of the gruesome narrative spun by Edward is consistently gripping. Indeed, a sub-message of the film is the striking power of the manuscript and thus our past to conjure up dark emotions. Its utter brilliance and horror is fleshed out not only in the Texan desert but also in the our minds, and the mind of Susan Morrow. Nocturnal Animals is an allegory against turning your back on the ones you love, and asking you to face what may be left in its place. Tom Ford brilliantly captures the influence of past regrets, guilt and lost ideals with great tragedy and engrossing terror, a lesson in slow, unyielding revenge.

‘Nocturnal Animals’ premiered in the UK on 14 October 2016, and is screening at selected cinemas.