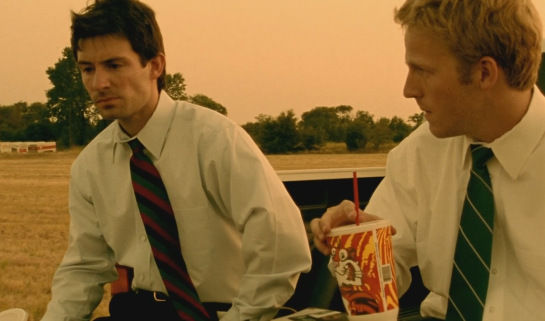 Abe and Aaron spend their days working white-collar office jobs at Cortex Semi, while dedicating their evenings to entrepreneurial engineering projects out of Aaron’s garage. Their newest invention: a rudimentary time machine, essentially nothing more than a large box cobbled together with panels of sheet metal and copper tubing from an old fridge. Before either of them can actually confirm if it really works, the pair are making boxes big enough to fit themselves inside to try and play the stock-market.

What follows, in Primer’s slim 77 minute running time, is ostensibly a film about time-travel, but to label it a time-travel film would be something of a misnomer. With no big-budget effects, catchy sounding machines or period recreations anywhere to be found, it eschews the traditional Hollywood archetypes, and deals not in years, but hours. Aaron and Abe’s coffin sized machines are made out of bits and pieces scrounged from cars and house-hold items; not only do they constantly leak argon, but they even need to be warmed up like an old car before you can get in them. Instead of Arnie emerging naked amid exploding bright lights, or flaming tire-tracks licking Marty McFly’s crotch, we get overworked, disheveled looking men talking about Feynman diagrams, parabolas and protein build-up. Characters mutter jargon at and over each other, seemingly engaging in exchanges of the utmost importance at a speed bordering on the incomprehensible.

The decision to communicate the central ideas at the heart of the film’s drama in such a disorienting way is bold, assuming the utmost attention and patience on behalf of the viewer. Instead of asking us to suspend disbelief at events that begin to unfold, it instead challenges us to think critically and wrangle the plot open for ourselves. No one understands Primer’s plot on first watch, and that’s sort of the point. Our protagonists are stuck, disorientated and generally winging it—and so, in turn, are we as the audience. Primer chooses to operate in its own peculiar space as a cinematic thought-experiment, sketching out various permutations of a time-travel mechanic, whilst purposefully rendering facets of this mechanic tantalisingly and taxingly opaque. Ultimately, it’s the care and efficiency in the handling of this process that makes Primer so impressive.

Where Primer really begins to reward however, is on multiple viewings. Once a basic understanding of the film is grasped and the scope and density of the narrative left to operate in the background, a wealth of nuances come to the fore. Small scraps of dialogue suddenly become intelligible and insightful, the fluorescent bleached aesthetic more visually impressive and spending time with Abe and Aaron fascinating rather than infuriating. Primer is also meticulously shot, as much a result of talent as necessity. Shane Carruth (director, producer, cinematographer, editor, composer and actor) largely shot his debut film in public locations with a budget of around $7,000, the majority of which was spent on a limited amount of 16mm film-stock. Even Carruth’s parents get a nod in the credits, catering for the five man skeleton-crew on location. For a film from such humble origins, its deft thematic gestures towards deceit, regret and isolation are better than they ought to have any right to be, and its portrayal of a central ethical drama is utterly compelling. Primer is a truly original slice of sci-fi; a complex, layered and ambiguous film that deserves to be re-watched, re-analysed and re-experienced.