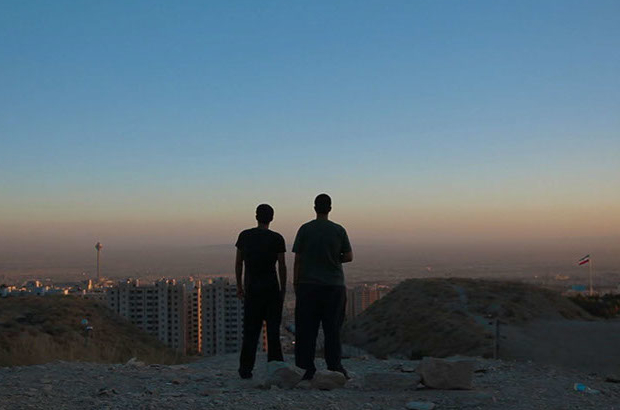 Raving Iran, the first feature length documentary by Susanne Regina Meures, explores the challenges of maintaining rave culture in Iran. The film follows Anoosh and Arash, two DJs who seek to promote their practice against all odds. They face a country hostile to subversive arts, ‘Western’ youth culture and the liberating power of bringing people together. Set in Iran in 2013, shortly following the election of Hassan Rouhani, we meet Anoosh and Arash, a duo performing under the name ‘Blade&Beard’. Their modern techno style is seen an insult to the regime, an affront to the customs and traditions that the older political elite are desperate to maintain.

To save their career from stagnation and ultimately failure, they plan to flee Iran and seek asylum in Europe. Opportunity arises in the form of an offer to perform at Swiss techno festival Street Parade, the largest of its kind worldwide. This is their chance to temporarily escape, but once they safely get out of Iran on their short stay visa, they face the toughest decision possible.

The film does a wonderful job of demonstrating the level of oppression felt by people in Iran. The film opens with Blade&Beard setting up their next gig: a rave deep in the Iranian desert. We witness the struggle to find a covert location, of persuading a crowd to risk coming, particularly women, and the level of disillusionment Anoosh and Arash have towards their homeland. Hijabs and heels are worn by the women out in the evening; these little details and snippets are some of the most enlightening features, portraying the wide-reaching political control over women. Anoosh instructs party-going females that they have to bring headscarves and spare clothes just in case of a police raid.

The film unveils fascinating insights into the two protagonists’ ambivalent feelings towards Iran. Arash wears Western corporation branded t-shirts. ‘This is where we belong’, he claims, when they’re researching European music festivals. Yet once free from their oppressive state he calls home all the time; ‘Tell me something about home. I miss Iran’.

There is a wonderful diversity of video material on display. Mobile phone footage, Louis Theroux-esque inconspicuous budget shooting and ultra-high definition cinematography of an Attenborough documentary level are all showcased and help in creating an incredibly full picture of one of the most complicated nations in the world. We are mesmerised by its beauty, terrified of its strength, and in awe of the power of will shown by these plucky young musicians.

Similarly, the sheer time, effort and bravery shown by Meures and her two protagonists, is somewhat overwhelming. The seldom-seen situations they have captured on film are vital to the success of the narrative; for example, they capture a meeting with a government bureaucrat over their rule breaking album and subversive live performances. The officials claim piercings on a woman’s face will send her ‘straight to the vice squad’: a cruel irony as she is herself female. ‘The Islamic Republic has taught us to take detours’, proclaims a weary record shop owner as he demands a dummy cover is put on top of the original album artwork.

These scenes from the first half of the film, displaying the state of Iran, are probably its strongest element. Once it moves on to tackle the crux of the plot, the duo’s escape to Europe, it becomes less a documentary and more a Hollywood narrative. Much of the latter half seems to move away from early general themes such as the oppression of women and pop culture and moves on to a more personal narrative. This is a shame, as much of what made the first half so engaging, the little detailed side shots and the previously unexplored situations, gives way to a more well-trodden path: coming of age and the decisions we make about whether to stay or go. ‘Go live your life son’ says Anoosh’s mother on the phone. Although this content is emotive, it is not quite as refreshing and insightful as many of the interactions in the first part of the film.

That said, the second part does not lose its way altogether. The ambivalence about Iran, particularly from Arash, is discussed further and the last-minute plot-twist leaves the viewer with a feeling of fulfilment as the credits roll. Raving Iran is a fabulous first piece by Susanne Regina Meures: a springboard of great magnitude for a career full of potential. It is an excellent watch for those interested in Middle Eastern contemporary culture and gender issues alike.

Raving Iran is on show on the 15th November at Ritzy Cinema, London. More information here.