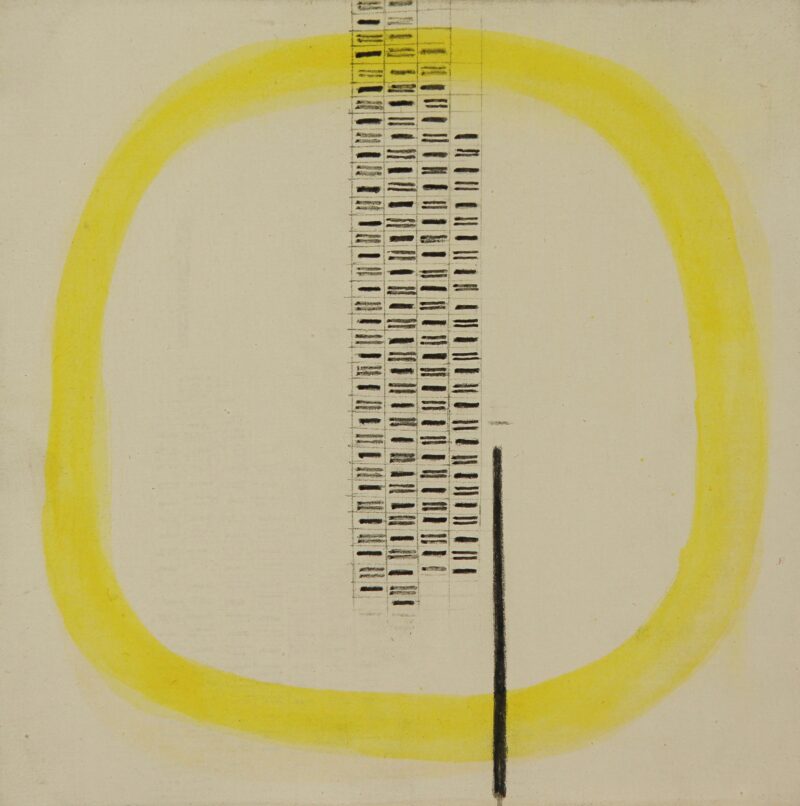 Bice Lazzari is a little known but hugely influential figure in Italian modernism whose work inspired friend Alberto Giacometti, amongst other contemporaries. She was one of the defining artists of the 20th century who were taking inspiration from Cubism and Surrealism, engaging with philosophical questions of the time, and understanding how to live with the fragments of the world after 1918.  The Estorick’s exhibition of Lazzari’s work highlights her lifelong engagement with material abstraction. With a career spanning the 20th century, Lazzari saw the impact of both World Wars. In her art, she enacts a sort of rebuilding of the disarrayed pieces from the fallout of mass destruction and conflict. As printed on the walls of the exhibition, she described this as a ‘call to complete dedication to discover new roads and new worlds’, disillusioned with the fracturing state of the rapidly modernising world; when exhibited in relative chronology, her works capture this transition from order and form to chaos.

Lazzari used textiles and collaged cushion fabric throughout her practice. In Cushion (1930), Lazzari knits together patches of bold colour and interlaced shapes, contrasting the defined, stitched edges with the softness of the material; this creates an inviting sense of homeliness and embodies an optimistic look to the future. This is one of her earliest works, created in the inter-war years, where futurism, purism and surrealism flourished. However, over the course of Lazzari’s life, it became increasingly difficult to reconcile and represent abstract, post-WW2 concepts; the limitations on her materials posed a significant challenge to her artistic process. Unable to rely on familiar methods, she pushed the boundaries of her comfort zone. As a result we see, through the process of her art, the process of reconciliation through knitting together these collaged fabrics: she literally reconciles material structures through the bringing together of fabric, metaphorically reconciling the crumbling, shifting modern world as she saw it also. By drawing these things together, she motions towards finding sense within them.

Later in life, Lazzari was less concerned, or perhaps unable to honestly tie fragmented parts of post-war life together, as she did in Cushion (1930). Lazzari worked with a variety of mediums: she began moving away from oil paints after developing an allergy to this material, which disjoined her creative process. This did not, however, lead to a drought in her creativity. Rather, it led Lazzari to experiment with more instantaneous mediums such as acrylic and graphite. Comparing two works, White and Black (1954) and Acrylic No. 5 (1975), demonstrates the differences between oil and acrylic, and how Lazzari manipulated the qualities of both. Lazzari used deep reds in both works. However, the oil paint provides multiple shades and depths to the orange-red colour, whereas the acrylic gives a monotone wash. There is something eerie and infinite about the orange wash in both works which obscures the sturdiness of the lines in . Between the lines, there is a lonely sense of mourning, of cold grief, set against a hazy and warm background.

A large portion of Lazzari’s work directly attends to her desire to explore ‘new roads’, as she examines and pushes the boundaries created by lines. In Pathways – Yellow (1953), she creates a geometric formation of lines which curve and interlace at varying points. The confused arrangement of these lines draws the eye to the centre of the piece, forming a lively nexus from which the lines emerge. Each line is distinguishable through its colour and thickness, creating a grid-like road structure that contrasts the overall sense of movement and disorientation. This speaks to questions posed by modernists about the vagueness of humanity’s purpose in postwar Europe, the possibilities of which can be considered by travelling along any one of these constructed pathways.

Even in more abstract works such as Untitled (1959), Lazzari integrates distinct line-making with a textured, nebulous background. A thick horizontal line adds weight to the tonal separations between the upper and lower portions of the painting, out of which protrude five indistinct vertical lines connecting the horizon to the bottom of the painting. Here, the lines impose some order on the chaos but simultaneously threaten the stability of the painting, providing unbalanced support of the horizon line. If viewed as pathways, we follow a bleak path towards the edge of the sky. Lazzari does not appear to condemn our journey: in spite of the blues in the sky being marred with black, they are also relieved by patches of white. There is an unresolved feeling of gloom embodied in this sky, which carries forth Lazzari’s feeling of uncertainty for the rest of the century. Lazzari translates this gloom onto the canvas in whatever material or shape befit it, and in doing so, makes a statement: it is possible to control and find meaning in entities that once were fragmented and separated.

Bice Lazzari: Modernist Pioneer is open at the Estorick Collection until 24 April 2022.