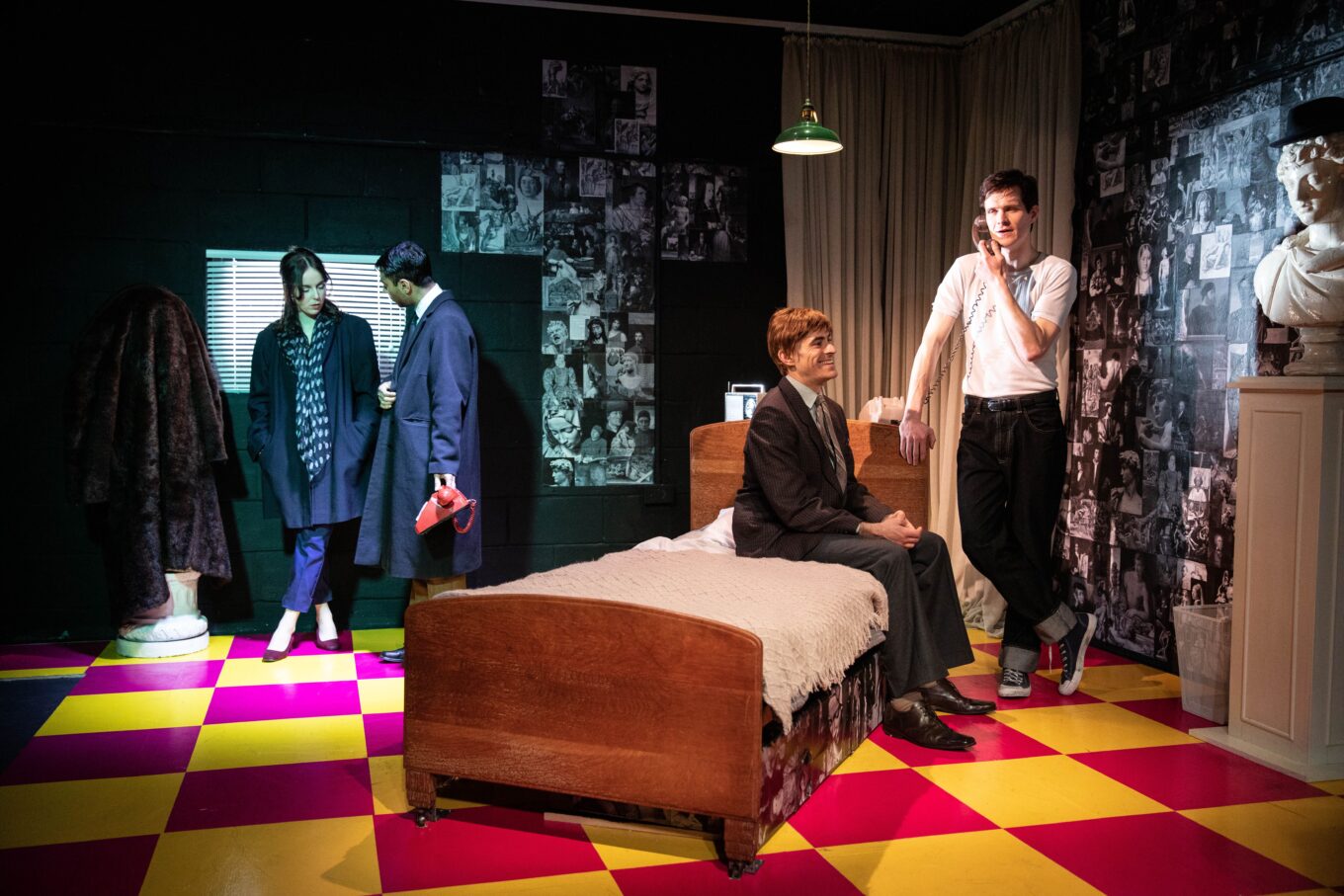 It is spring break, and Bloomsbury is somewhat freed from its usual throng of students. Down Gower Street lies the unassuming fixture of the Royal Academy of Dramatic Art (RADA). Now a partially refurbished building consisting of a preserved ancient front and metallic back entrance, RADA blends in seamlessly with its surrounding counterparts of sturdy institutional buildings; stately, mildly worn-down establishments filled with the lingering touch of bygone days and past memories. It was here in 1951 that Joe Orton, the infamous English playwright sought out an education in acting . Prolific and promiscuous, Joe Orton’s influential career quickly soared, in a series of tumultuous and often controversial acts which produced the makings of his short but dazzling life.

Staged for the first time in thirty-five years, Diary of a Somebody  (2019) is a deep dive into the mind of one of the most witty, rebellious, and acclaimed artists of his generation. Featuring a selection of star-studded cast members, the play introduces Bridgerton’s George Kemp as the notorious artist and playwright Joe Orton himself, along with Game of Thrones’  Toby Osmond as Kenneth Halliwell, Orton’s mentor and counterpart. Watching the play equipped with no prior knowledge, only a curious fascination to find out more about a star whose career originated from within such close proximity, the play’s abrupt beginning delighted me. Without warning, a fanfare of brash music and lighting flooded the small empty stage, bringing it into life. Six cast members strolled onstage in unison and immediately commenced a fast-paced listing of Joe Orton’s life events, mimicking the style of Orton’s private diaries, from which lines of the play were taken verbatim. Director Nico Rao Pimparé’s orchestration of the play compliments the theatrical sporadicity of Joe Orton’s life, and sets the stage for a performance which is larger-than-life.

The skillful prowess of all six cast members is certainly one of the highlights of the show. Taking on the role of numerous minor characters, the supporting cast members, Jemma Churchill, Jamie Zubairi, Sorcha Kennedy, and Ryan Rajan Mal undertake a collectively impressive rotation of clothes, props, and personas to portray the multitudes of casual encounters Joe Orton experienced in his life. Coupled with the location’s intimate setting and stripped-bare production, the talents of each individual cast member really shone through. The stripped back staging, props including fake plastic Greek statues and a shabby bed frame that became a focal point throughout the production, indicated to me that this play was conceived under a stringent budget. However, Pimparé’s direction made the play work, and throughout the play’s seventy-five minute running time, I felt like I was truly peering into the life and inner workings of Joe Orton’s mind.

The cynical juxtaposition of the play certainly mesmerised the audience. The fast-paced, everchanging emotional rollercoaster of scandal, quick-wit, and poignancy left the small audience of around fifty people constantly on the edges of their seats. Incorporating the words of Orton’s diaries, along with psychiatric reports and outside correspondence, Diary of a Somebody  intertwines humour with eerily sombre moments, making it a well-balanced dramatisation of the last eight months of Joe Orton’s life.

The dynamic between Kemp and Osmond was simply off the charts, with both actors constantly riffing off each other’s energy to construe their characters’ shared artistic talents, but polar opposite personalities. While Orton was notoriously promiscuous, Kenneth Halliwell was portrayed as reserved and almost subservient, progressively retreating into the shield of household domesticities the more Orton’s fame imploded. As Orton’s life and career propelled, Kenneth’s mental health and wellbeing deteriorated rapidly. Particularly surreal were the instances where Halliwell lies down placidly on the bed, placed fiscally in the centre of the room, as Orton paces animatedly about the stage, engaged in his monologues of debauchery and ambition. These instances were greatly symbolic of their inequitable relationship, and were highly effective in foreshadowing the final moment between the pair, when Halliwell finally seeks his revenge.

Fueled largely by a spirit of self-importance and ambition, Orton’s seemingly small thefts and crimes were magnified and beautifully portrayed by the enigmatic, booming, expressions of Kemp. Intrigued by the vivacity of Orton’s sheer hunger for the pleasures of life, I later researched  Orton’s biography. His misdemeanours were by no means impressive: imprisonment following the defacement of library books would hardly warrant a reaction of awe or fascination. It is Orton’s self-proclaimed spirit of ‘specialness’ which ensured  his life be interesting and controversial, and his yearning for instant gratification which spurred on his often reckless but rewarding pursuits. Diary of a Somebody is a decidedly exuberant and genuine play, and it is this big hearted energy of sincerity which keeps it moving along with utmost efficacy.

Diary of a Somebody runs at Seven Dials Playhouse until 30th April 2022. Find out more here.