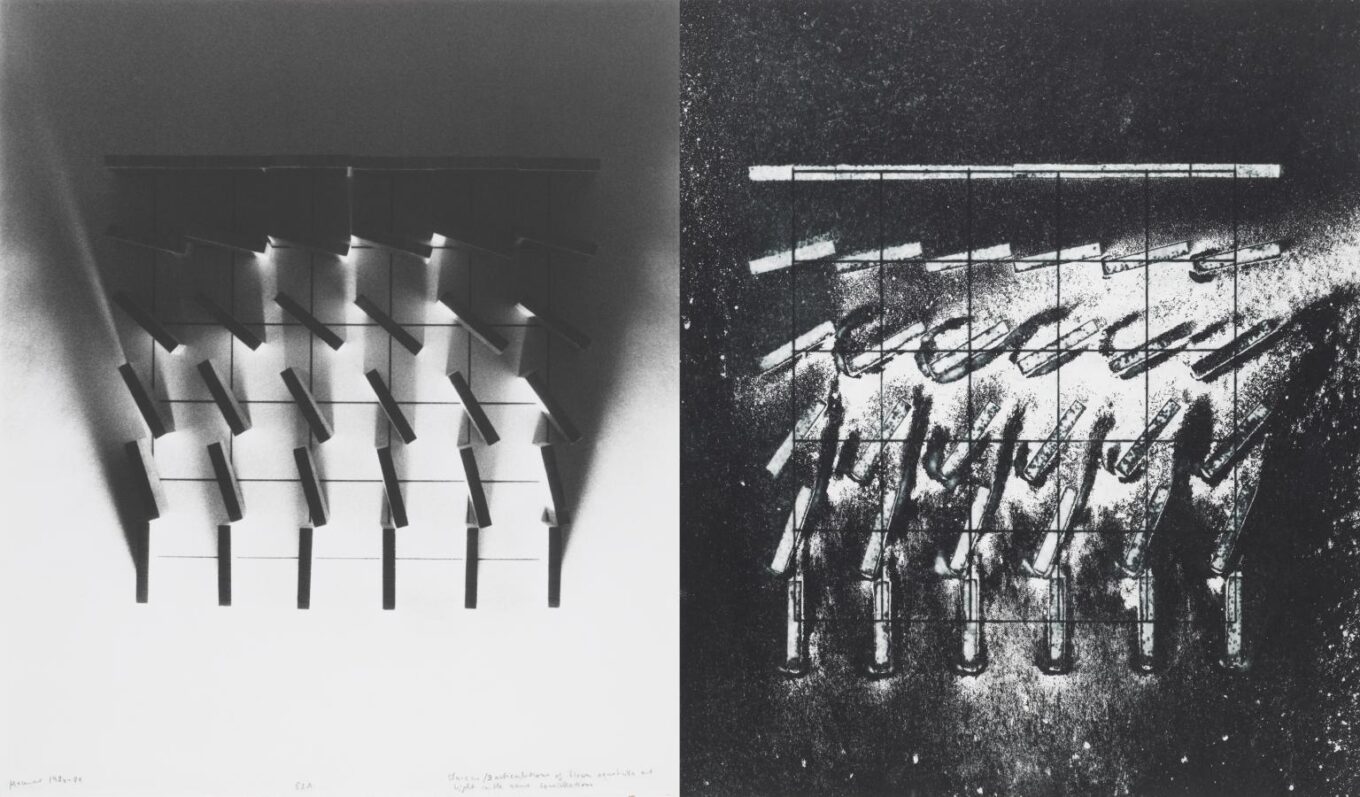 ISABELLA JAKOBSEN reviews the Dóra Maurer exhibition at the Tate Modern, considering how Maurer’s practice is imbibed with the idiosyncrasies of Hungarian artistic production.

Does the culture of your home country influence the art you make? This was a question I had in my mind as I walked into the Dóra Maurer exhibition at the Tate Modern earlier this year. I was pleasantly surprised to find in Maurer’s works what I think is a typically Hungarian approach to art.  All the twentieth-century Hungarian artists I have encountered tend to use a heavily interdisciplinary approach; with artists such as Victor Vasarely drawing on areas such as geometry and optics, and Lászlo Moholy-Nagy, an influential figure in the Bauhaus, drawing on technology and industry. This also extends to other forms of art: literature intertwines with linguistics in Ferenc Karinthy’s novels; architecture takes from the natural world in the Austro-Hungarian Secession movement.

The first thing that struck me when I walked into the exhibition were the sounds coming from the darkened projection room: the best way I can describe them is as a sort of multi-layered wailing. It was coming from Maurer’s short film Triolets (1981), a film about movement. The work is composed of a three-way split screen, each strip showing scenes that had been filmed in circular motions. This is a very striking, eccentric piece, not only because of the rapid and dizzying movement of the camera, but also because of the way that these moving images overlap with wailing cries in three different pitches to match the three different images. In an interview with Artmagazin, Maurer identifies ‘displacement’ as a key theme in her work. She was interested in the different meanings created from the movement or metamorphosis of something (in this case, a woman’s face, or, in other examples, the movement of the river Danube, of soil made clayey by the rain, or the borders of a country). With her film-making, Maurer became associated with the Béla Balázs Studio in the ‘70s. This was a group of avant-garde filmmakers and artists, who challenged the strictness of socialist culture in Soviet-occupied Hungary with their deconstructivist and experimental techniques.

Even though Maurer was a painter/etcher by training, she also produced works not only in film but in photography as well. My favourite piece from the exhibition was a series of photographs that she and friend Zoltán Lábas took of each other, Parallel Lines, Analyses (1977). The premise of the project was that the two artists would run along opposite terraces of a courtyard, taking pictures of the other as they went along. The result is a joyful, blurred, and ultimately very simple representation of movement. In some of the photos, you can see them laughing, or a blurred figure running into the edge of the shot. There are many other photo series like this one in the exhibition, all similarly full of the joy found in creating something, for example: Reversible And Changeable Phases Of Movements No.6 (1972), a series of different hand movements; Reversible And Changeable Phases Of Movements No.3 (1972), a series where a man with his back to the camera sits on a stool and stands up again; and What can one do with a paving stone? (1971), a series where Maurer herself engages in different ways with a large stone. However, Parallel Lines, Analyses stuck out to me especially, because it evoked the communality of Budapest apartment block courtyards, which I spent a large part of my childhood in.

Next to some of these photo series, small diagrams of the setup were also displayed, including things like segmented lines, shaded shapes, and rough graphs. This mathematical approach is present everywhere in Maurer’s works, but nowhere more evident than in Schautafel 4 (1972), a kind of number game with twigs. The artist created a grid, sticking different coloured twigs onto this surface that each represent different numbers, arranged in such a way that every row and column add up to the same value. It is perhaps surprising to find a mathematical puzzle in an art gallery, and I think it is a particularly Hungarian idiosyncrasy, since mathematical thinking holds a significant place in Hungarian culture (an example of this, as any Hungarian would be glad to remind you, is the Rubik’s cube, an invention by the Hungarian Ernő Rubik).

Maurer’s interest in movement, process, and mathematics come together in what has made up the last forty or so years of her career, with her Quasi Images series and then later, her Form Gymnastics series. These are paintings on canvas that show how different coloured shapes look when they are moved along a grid, or viewed from a different angle, or in a different light. It is captivating to look at the shapes she makes and the colours that they produce when overlapping in different places. In fact, it is useless to try and describe these works in words; you will only understand what I mean when you see the paintings yourself. In this sense, you could say that Maurer has almost created music with colour.

It might be at first surprising that such creativity can come from mathematical systems such as shapes on a grid, but it is only by pushing the boundaries of what we call ‘art’ that we can find the most original work. And in a way, it makes sense too, because both art and maths are concerned with modelling forms and representing reality, which is something that I think a lot of Hungarian artists of the past century were conscious of, including Dóra Maurer. And so, to return to the question I raised earlier about whether one’s culture influences the way one makes and thinks about art; I think the answer for Maurer is a definitive yes.

The Dóra Maurer exhibition is open at the Tate Modern until 24.01.21.