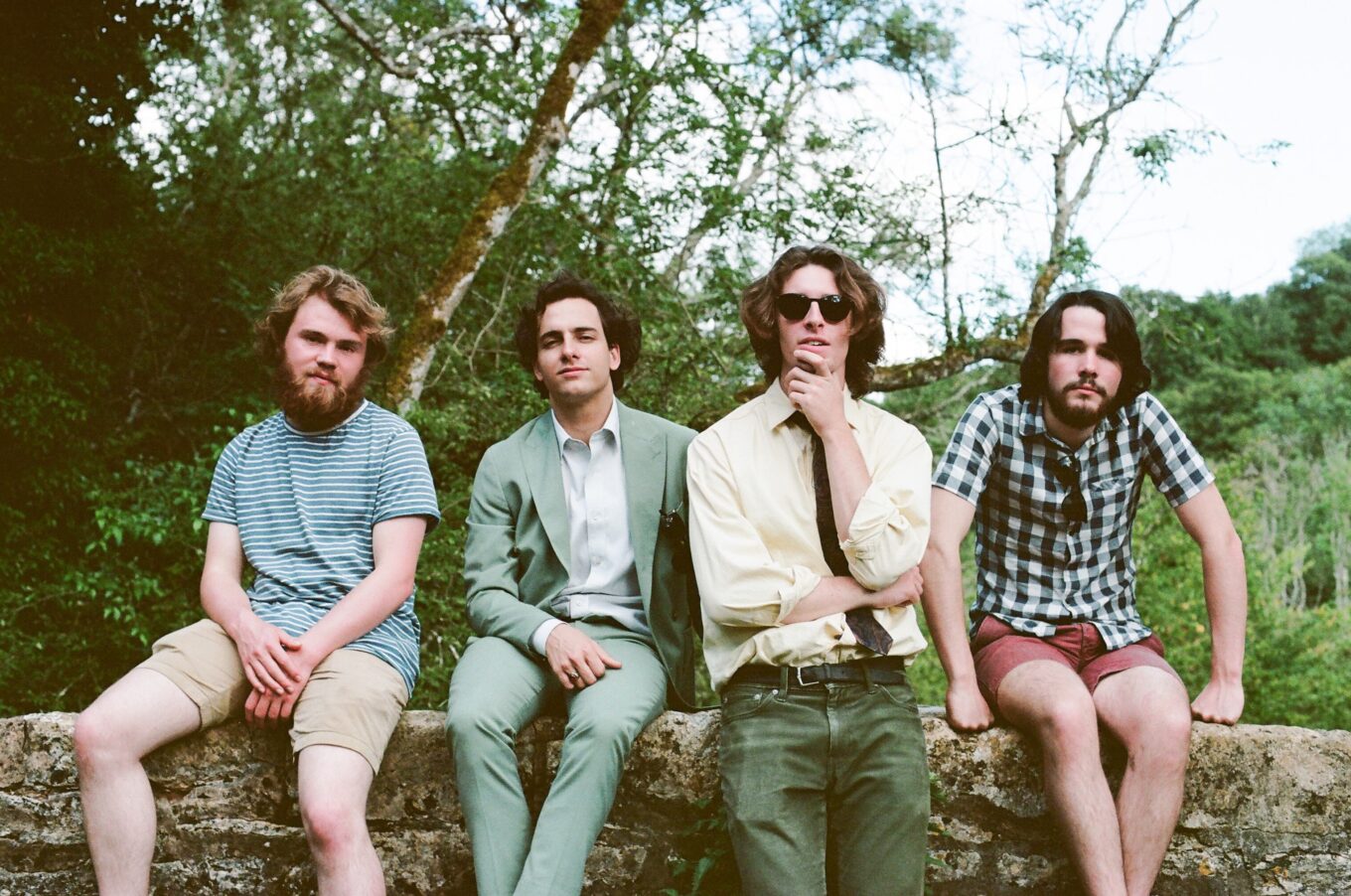 SOURFACE is an Anglo-French band of four based in London. Their catchy and poetic songs are influenced by a variety of genres, such as funk, indie, jazz and bossa-nova. The band recorded their first EP Daytime’s Past this summer.

PHYLLIS AKALIN interviews them about their upcoming EP and live music in times of a pandemic.

The songs you’ve released so far have been very diverse. Your influences include indie, funk and jazz – why have you decided to mix such a broad range of genres instead of focusing just on one?

Alexandre (bass and vocals): We didn’t decide anything, we just did it. We all have different musical influences; I think it just came naturally.

Matt (piano): I think we just never decided what type of band we wanted to be, and by virtue of doing that we just didn’t worry about choosing one genre.

Ludo (guitar and vocals): With the first five songs we wrote, there were no plans about what we were going to write. We just went to Tom’s, we had the songs, we did it.

Matt: It was basically just a big experiment at the start.

Tom (drums): Experiment implies that we knew what we were doing. Mess is, I think, more appropriate.

Alexandre: But more and more we are making a coherent type of music because we all influence each other.

Why have you decided to have lyrics both in English and French? Does that reflect your identity to some extent?

Tom: I think that’s just the layout of the band, really.

Alexandre: We all have different relations to France: I’m fully French, Ludo is half-French half-English, Tom has lived in France and Matthew is a Francophile [laughs]. The first time we recorded songs, I had three songs in mind and Ludo had three songs in mind. I didn’t want to add any songs written by French people in English, so I stuck to French.

Why the name Sourface?

Matt: There was a certain incident in our first year of university, which later became a recurrent joke. Ludo was basically dancing on a kitchen surface when we had a drunk foam party in our halls. When it finally came down to us being a band, we were thinking of a name. Obviously, the first thing we think of is surfaces. And then, I was just like, what about Sourface?

Tom: It works because it’s short, it’s snappy, it means nothing.

You recorded most of your new songs in the countryside near Gloucestershire. Is that environment somehow reflected in your songs?

Matt: I think every time we’ve done a huge recording session, it’s very intense. It’s good to have a place that’s very quiet and where we can just be left to our own devices because we just get completely absorbed in the music. When we were at mine, in the countryside, all we did was make music. And when we weren’t playing music, we were playing football.

Tom: The way we record is very intensive. It’s pretty non-stop and it’s fairly draining because we go for like ten hours. It was amazing to be able to say, ‘right, we’ve done that, let’s go outside for five minutes to just breathe’.

Alexandre: We were literally in wild nature, with sheep – proper countryside.

Tom: It’s not anything new, Rockfield in Wales, which is a really famous recording studio – that was just in the middle of nowhere. It was a converted farmhouse at the edge of civilisation, which, to be frank, is a pretty good qualifier for Wales in general. I think in terms of inspiration and music, there’s always a will to escape, to not be here [in London].

Speaking of escape, you recorded very shortly after lockdown was lifted. Did lockdown have an impact on your creativity or productivity?

Ludo: Definitely. The only way we kept sane was by making all those demos and recording during lockdown. We would make our parts on GarageBand and send them to each other.

Matt: We worked hard. There was always something to do. Every day, we basically had an on-going conversation about the parts.

Tom: We also saw each other in person twice or three times, but apart from that it was a process of distant learning as we’re all familiar with now.

Are any of your new songs influenced by lockdown or are they mainly based on other experiences/ideas?

Ludo: Most songs were written before.

Matt: Obviously, the year abroad influenced our song-writing in some ways.

Tom: I’d say the stuff was already there, they just find additional meaning in lockdown, but it’s just a coincidence. A lot of them can very easily be interpreted in that context, but they were all written before lockdown.

Live music can only happen at a very limited capacity at the moment. A huge part of both genres that influence you, funk and indie, is dancing and interaction from the audience. You recently had a gig in Paris, followed by another gig at The Raven, Tower Bridge. How did you experience this new form of a socially distant gig?

Matt: The one in Paris wasn’t really socially distanced.

Alexandre: It was supposed to be, but in the end, everyone was dancing.

Ludo: That was probably the best atmosphere we ever had at a gig. The Raven one was very different. There’s less of an interactive side of the performance because it’s harder to do so; there is a barrier you need to break.

Alexandre: It was definitely weird to play in front of a seated audience. The feedback we got from it is that people experience our music in a very different way. People were saying to me, we listen more to the songs, rather than just vibing to it physically.

Matt: So, there are benefits to it as well.

What was your personal highlight of 2020 so far?

Ludo: That was a prolonged highlight.

Matt: Also, our gig in Paris was a great night.

Alexandre: For me, the moment with the most energy was probably at Tom’s place in Paris, when we were rehearsing for the gig. And we basically got three new songs down in pretty much an afternoon, and we were just jamming to it. We got several noise complaints, but we had an epiphany that afternoon.

Tom: It was a very creative afternoon. I think it would have to be listening to the ten songs we recorded over the summer on this nice hi-fi, that was pretty surreal. Or the gig in Paris, because we played thirteen songs, a one-hour set. And the audience was loving it.

Your latest release, 21st Century Man, seems to reflect a sense of melancholy, of feeling lost and looking for something. Is that how you think of our generation?

Ludo: The song was kind of a slightly jokey image.

Alexandre: We definitely live in a time that is very nostalgic of the past.

Matt: The song is cathartic.

Ludo: Exactly, the release comes out at the end. So, it’s a mixture of a slightly sad or melancholic answer to it and then it kind of comes out. It has a slightly bouncy, uplifting sound.

Matt: A lot of music nowadays is about being sad or depressed in your bedroom. And our music riffs on that, but also, there’s a positive spin on it.

Tom: I always thought it was about escape from office-life, from the chains of capitalism. And that’s something we all care very strongly about.

Your first EP Daytime’s Past will be released in December. How would you describe it in terms of genre, sound, vibe, themes?

Matt: This is the introductory EP; these are the first songs that we wrote, and they definitely feel kind of young and fresh.

Alexandre: I feel like in a second EP we really manage to refine our style and our sound, whereas this first EP is just the raw, primitive energy we first had. It’s an introduction to our world.

Tom: Our second EP will be a lot more developed. But in general, 21st Century Man is definitely one of my favourites.

Matt: Those other songs we recorded over the summer will be released as singles early next year.

Matt: We want to make a really, really good album, that establishes us as a band.

Alexandre: We do have the energy and the opportunity to do so. First albums are really important and very defining for a band. The best scenario would be that our first EP attracts some attention and therefore, we’re able to turn the second EP into a full album. We’re also looking to do bigger gigs, one of them being the Isle of Wight Festival.

Ludo: We obviously don’t know the situation of COVID, but we’ve got some places in mind we want to get playing at after January and an album, hopefully.

Ludo: We have all our pipe dreams now.

Sweet Dreams Suburbia and 21st Century Man are now streaming on Spotify. Sourface’s third song, Entre Inconnus, will be released on 13th November. Their first EP Daytime’s Past will be released in December.