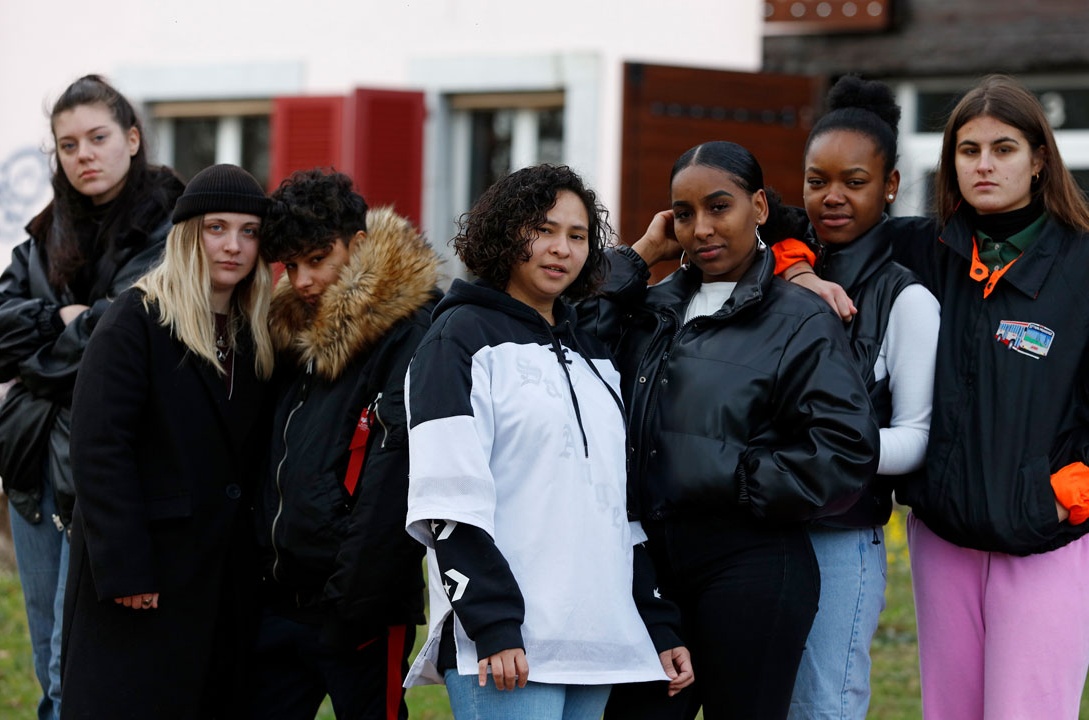 La Mif (2021), or ‘The Fam(ily)’ in French slang, traces the interconnecting and ruptured lives of a group of young girls in a care home. The title is from the very vocabulary of the youths, reversing the word ‘famillie’ and shortening it. Yet not only the title is derived in this way: the script is borne out of interviews that the director, Fred Bailiff, held with his actors, drawing scenes from their own lives. The film is a documentary-drama; Bailiff draws on his own experiences as a street social worker, using an ensemble composed of non-professional actors and improvised scenes. La Mif follows the fallout of one incident, in which a seventeen-year-old girl is caught having sex with an underage boy, triggering a chain of events through a search for solutions, and revealing only failures in the system. Through these elements of authenticity, Bailiff creates a film that presents the raw and brutal truth of living in social care.

The film maintains a non-linear structure with overlapping chapters, each named after an individual character. The narrative’s fragmented and fractured nature reflects the messy reality of their lives. Each chapter relates to the broader storyline like a puzzle piece, but the deeper we traverse, the blurrier the picture is – it remains a largely abstract painting that cannot be deciphered. This disjointedness, combined with handheld camerawork and frequent close ups, prioritises chaotic immediacy over intricate composition. By doing this, the film speaks to the trauma that the girls have been subjected to. At first, the naturalistic style is affronting, as there is little sense of a silver screen. Instead, we are continuously bombarded with chapter changes, as well as unsettling, eerie silences; these are most visceral in scenes where the girls relate the intricacies of their stories and the reasons why they find themselves in care. One, in particular, involves a girl who relays a family tragedy, the cause of which has been made to stain her hands. The scene is wrought with poignant and even disturbing silences, and upon viewing, the cinema itself becomes an echo chamber of whispers, tears and laments, involving us, as spectators, within the arena of the storytelling. Yet all formalisms and happy endings are dispensed with here: like the characters onscreen, we are left in stark silence, with nothing to say and no solution to give. Realism is the focus; La Mif reaches for authenticity above any polished visuals, but a beauty is found in the rawness.

Such realism is equally found in the recurring, framing shots of windows. Spaces are encumbered with physical barriers – doors, walls and windows separating the girls from their freedom. In successive shots of the turning over of bedsheets, Bailiff shoots care home inhabitants watching friends and makeshift family members leave them behind, through the looking-glass frame. Care homes become cyclical spaces, where nothing stays stable or familiar. This motif creates an un-choreographed sensation of mise en abyme: we are viewing scenes within scenes. The girls’ lives unravel at the seams, reflected in the fragility of the glass frame itself. The film becomes a vessel to peer inside the complex interpersonal relationships within the compound. In peering through, Bailiff plays with the very idea of watching lives depicted on screens, and any sense of sentimentality is debauched. La Mif becomes less about its inciting incident than about the inner dynamics of the girls’ lives, gradually deepening our empathy for each individual.

The film equally embodies all the bristling, bustling energy of adolescent girls. It is an honest depiction of the stages of maturing, including sexual awakenings, teenage volatility, and rage. It refuses to judge its characters: the confessions of each don’t reach for any artificial revelation, but exist as expressions of their innate humanity. It depicts the flaws that are inherent in us, and in the systems we depend on to protect us. But the girls, through such adversity, also harbour an innate compassion for one another. In one of the final scenes, though verging on cliché, they huddle around a campfire, sharing secrets and stories, until one admits  that, in them, she has found her ‘mif’. This is not a story of who we choose to love, but who we grow to love.

Thanks to the BFI for providing tickets. La Mif was shown at BFI Southbank as part of the BFI Southbank’s recent film season, ‘Seen & Heard: Daring Female Coming of Age Films’.