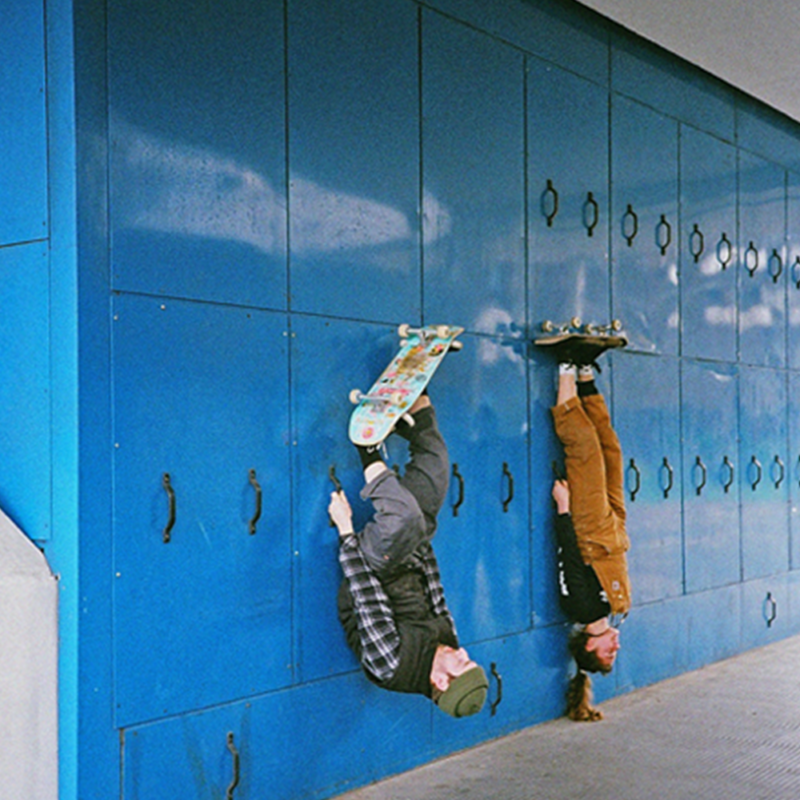 MARISA BECIROVIC reviews No Comply at Somerset House, as skateboarding pushes into the spotlight.

Weave your way past Yinka Ilori’s lime coloured mesh booths and the dodgems marquee currently installed in the Somerset House courtyard. In three small rooms in the South Wing there is something extraordinary; an exhibition on skateboarding. No Comply extracts the drops, ollies and kickflips from the skate park and places them in the museum. The exhibit is a concise look at the origins of skateboarding, its evolution in different communities, its unique culture and its impact on society. The three rooms are tattooed with quotes, displaying an array of objects that construct the world of skating around you. It’s almost like walking into an old skater’s scrapbook; zines, stickers, posters, t-shirts, ruined skateboards. A collection of tokens from skateboarding rather than an in depth dissection of it, a resonant subculture that has never properly been displayed in the mainstream is evoked.

The exhibit begins with the origins of the ‘scene’. It seems important to stress that buzzword, as the exhibit focuses on the community underpinning skateboarding. Created in America by surfers who wanted to practise their skills on land when the waves were too small, skating quickly evolved into more than a substitute for surfing, and by the mid-seventies there were a range of styles, techniques and skateboarding groups. The award winning documentary film Dogtown and Z-boys (2001) demonstrates the boundaries one Venice Beach skate team would cross, trespassing into peoples’ yards to skate in their empty pools, fleshing out a new culture of skateboarding. In the late seventies it hit the UK; in much the same way skating coalesced groups of enthusiasts who adopted it to their communities . No Comply highlights the way in which skateboarding gives people a sense of community and connection. A touching collection of notes from the Palomino skate community reveals the close knit culture in skating rarely seen from the outside.

A young skater in one short film explains how skating feels like an ‘escape’. This is echoed throughout the exhibition with artworks and articles about skateboarding from children and young adults in poverty and warzones. It may seem trite to shoehorn the COVID pandemic in skateboarding’s narrative, but as the public were confined to their locales and could only socialise outside, skateboarding grew in popularity as a sport, and also as a way to connect with others during this time.

A key part of skateboarding culture peppered through the exhibition is the notion of ‘doing it yourself’. Initially with skateboards were improvised,  today they are still assembled, personalised and adapted by hand. Skateparks were uncommon, especially in less affluent areas where skateboarding was one of the most accessible sports for children. Skating communities would build their own terrain, adapting curbs and street furniture or even casting their own ramps with concrete and plywood. A plethora of zines, posters, articles and videotapes are on display, created by skaters, for skaters. For such a notoriously independent and esoteric pastime, often shunned and shunted to the margins, it feels strange to see these artefacts spotlighted on plinths.

It’s a disappointment that No Comply shows us little of the enormous influence skating has had on wider culture such as music and fashion. It presents Palace T-shirts and Louis Vuitton skate shoes without commenting on the price tags these items fetch and how divorced they are from the grungy, often brutal sport that spawned them. The aesthetics of brands like Thrasher, who’s clothing is now ubiquitous, have arguably become alienated from their own scene. In one room a quote speaks of running out of money and sleeping in ditches ‘just to go skateboarding’; in the next Palace’s worldwide popularity is presented as an achievement alongside their fifty-pound t-shirts. This sad contrast, a familiar story of a subculture appropriated, represents the state of skateboarding today. The exhibition doesn’t expound or flesh out these issues, and harbours little self-reflection; a subculture that mythologises itself as a refuge for lost boys and grotty outcasts has long been dominated by straight men forming an often-intimidating clique.

Virgil Abloh’s thousand-pound LV shoes are shielded, pristine in a glass case, as if to underline their separation from actual skateboarders. In the same room a documentary plays featuring Elaine Shallcross, who embraced skating after receiving a cancer diagnosis. There’s also a portrait memorialising talented, popular London skater, Ben Raemers. A Foundation set up in his honour aims to tackle issues of mental health in the skating community. It’s the last thing you see before leaving the exhibition.

After being historically unwelcome in public spaces skateboarding has finally been deemed a ‘sport’ by the Olympics and incorporated for the first time at Tokyo 2020, coinciding with this relatively major exhibition. It’s the recognition skateboarding deserves, but is it what it needs? TV coverage and the achievements of Sky Brown, the UK’s thirteen-year-old female bronze medallist, have bolstered the public’s enthusiasm for skateboarding and inspired girls in particular to take up the sport. And yet at the same time the skatepark where team GB athletes trained faces closure; endemic of Britain’s lopsided and inadequate investment in community sports facilities.

I’m left wondering what skateboarding will gain from such overdue exposure. The three small rooms don’t do a rich subculture justice in the same way they wouldn’t be able to adequately represent the entirety of equally influential and long running cultural seams like hip-hop or ceramics, for example. It gives a snapshot, offering up tokens of its febrile history and is over before it has begun. It’s an important underground culture that ought to be preserved and documented, but if we are going to shine a light on alternative and underground scenes like these in the mainstream, it should be most with utmost consideration. No Comply highlights skateboarding, and tempts us to become part of it, but doesn’t ask the bigger questions.

No Comply is free to view at Somerset House until 19 September 2021.