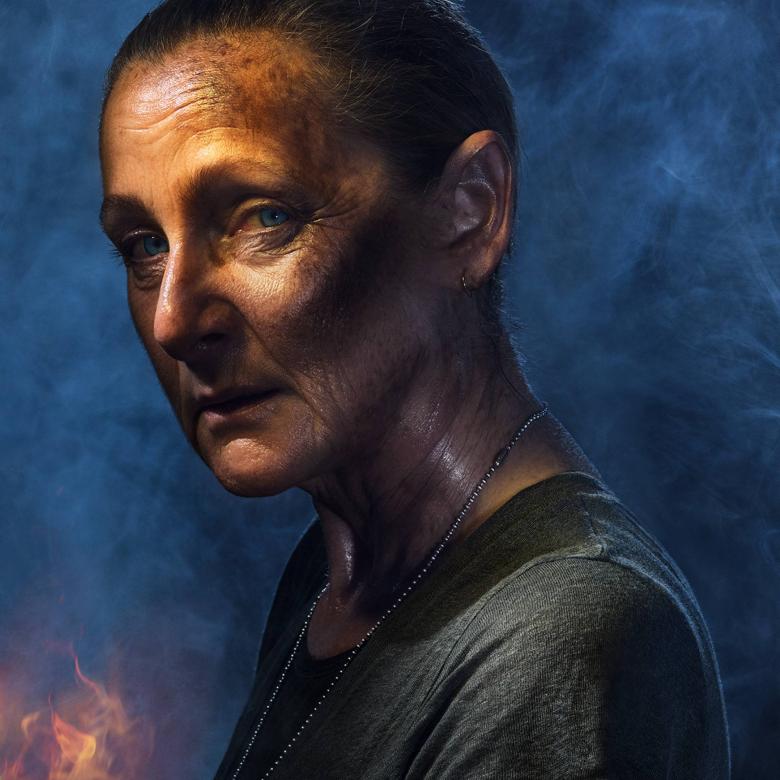 Philoctetes was a great warrior, abandoned on the way to Troy by Odysseus (Anastasia Hille) having been wounded by a snake bite. Ten years later, a captured Trojan seer argues that the Greeks require Philoctetes and Heracles’ bow, which is in Philoctetes’ possession, to win the war. The young soldier Neoptolemus (Gloria Obianyo), son of Achilles, joins Odysseus on a mission to bring back the wounded hero.

This structure remains in Tempest’s version, but there are a number of changes and additions, executed with varying levels of success. Instead of Neoptolemus’ sailors, the chorus are a band of refugees, meaning that Philoctetes is not alone on the island. In their 2020 On Connection, Tempest writes that ‘empathy is remembering that everybody has a story’, and indeed the chorus draws this out. Their relations with one another provide some of the more lyrical songs, stories and richness in the play, but their lives of social injustice and closed borders seem at a jarring remove from the drama’s classical structure. The chorus’ relationship with Philoctetes also dilutes one of the central questions of the play: what constitutes character when isolated from society? Philoctetes is revealed to have had a passionate affair with an islander, which to me fit neither with the plot of the original, nor the new version.

Tempest originally considered male actors, but felt this was a missed opportunity. Her decision to utilise an all-female cast is not merely refreshing in the sense of diversity but has artistic merit. The play dissects values traditionally seen as ‘masculine’, such as reason, morality and heroism; by casting women Tempest draws attention to these as constructs that are performed. That said, there were times when Sharp’s Philoctetes and Hille’s Odysseus perhaps strayed too far into this performativity, verging on rendering the characters slightly two-dimensional.

Sophocles’ original is beautiful in its lyricism and simplicity. It pulls at the seams of questions about the substance of heroism and morality, asking if these are fixed or changeable, innate or context-dependent. Tempest’s additions are not poor in and of themselves, however, they detract from Sophocles’ original, and fail to stand up in their own right. In one of the finest moments of the play, Philoctetes offers a searing rebuke of the state of the world, drawing on timeless themes yet clearly lodged in a critique of late-stage capitalism and globalisation. Where much of the script lacks vibrant imagery, Tempest’s evident talent here comes to the fore. Rousing contempt for border policies, racial injustice and inequality seethe through the language, images of those who have drunk ‘the black water that gathers in the vines’ striking me particularly. Despite its strengths, the speech feels contained extraneously from the majority of the drama. It left me wanting to see Tempest push further with their own originality, perhaps by leaving the source material further behind.