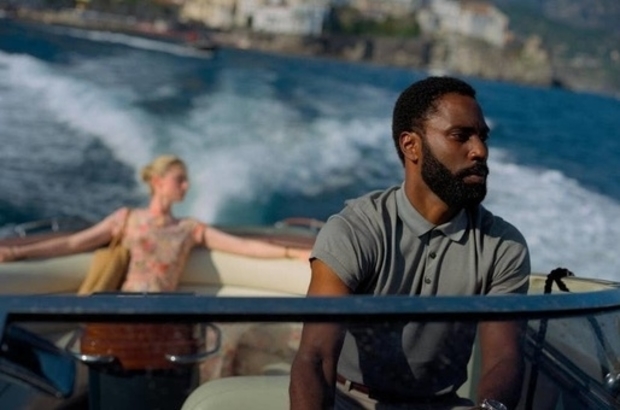 Christopher Nolan’s new film Tenet is grand and engaging, especially  in a time where a visit to the cinema seems like the most exciting thing that has happened in  months.

For anyone who has somehow managed to avoid any information about the film’s plot, here is a quick summary: an unnamed CIA operative, referred to in the film as “The Protagonist” (John David Washington), is recruited to a secret organisation called Tenet. He is given the task to prevent the Russian oligarch Anderi Sator (Keneth Branagh) from starting a Third World War and ending the world . To accomplish his mission, The Protagonist is helped by a number of people, such as his ally Neil (Robert Pattinson), scientist Laura (Clémence Poésy) and the weapon dealer Priya (Dimple Kapadia). He also uses Sator’s wife, Kat (Elizabeth Debicki), to get close to the oligarch. As the two get to know each other, The Protagonist’s affection for Kat grows and he realises that he has an additional mission to complete: to rescue Kat from her husband. Oh, and in a true Nolanian way, the story unfolds in a ‘twilight world’ where time functions in a different way. Important to note, however, is that it’s not a story about time travelling, but about time inversion. The potential Third World War that The Protagonist must prevent is not a war in its traditional sense, but a temporal cold war, in which the future attacks the present. Easy, right?

If you think this sounds confusing, well, then you have already got quite a good understanding of the film. After having watched it all and afterwards cheated by googling ‘tenet plot explained’ (yes, I’m that kind of person), I am still confused. By challenging the laws of physics and building the plot on abstract ideas about time rather than space, the fictitious on-screen universe is somehow harder to grasp than fictitious worlds normally are, as it seems to go against our normal instincts to situate ourselves. Usually, in films about time travelling, the characters move backwards and forwards in time in a way that is similar to spatial travelling — they simply move from one place to another, making it easy for the viewer to follow. In Tenet, on the other hand, the actual time is inverted, creating scenes where ‘inverted’ objects and people (that move backwards in time) and ‘normal’ objects (that move forward in time) exist simultaneously in the same space. If  Simran Hans’ suggestion in her review for The Guardian is true, and the confusing plot is a conscious strategy by Nolan to encourage the audience to ‘feel’ the film rather than to understand it, I must admit that it is quite an efficient one. The concept of an inverted time is a completely new way of thinking and if you want to last the entire movie without going crazy, you have no choice but to throw yourself into it.

The special effects in the film are impressive and definitely made for the big screen, where you can fully take them in. And even though Tenet is structured around the classical struggle between good and bad, it certainly explores said struggle in a new and intriguing way. The concept of an inverted time spices up car chases and fist fights that otherwise might have been slightly too long, and the film’s two hours and thirty minutes running time passes quickly. As the future is attacking the present, you find yourself cheering on not only the story’s hero, but also the present time itself.

What is most disappointing about the film is its failure to step outside the patriarchal structures that are almost  the norm  in films in this genre. Too often men are driving the narrative whilst women stand by as passive objects. To phrase it simply: two men in suits and expensive-looking watches are trying to save not only the world, but also Kat, the emotional wife and mother who needs to be rescued from her evil husband. Whereas the Protagonist and Neil keep a clear head and make reasonable decisions as they bravely face the obstacles presented to them, Kat is constantly overwhelmed by her own emotions and motherly instincts, seemingly unable to do what the situation requires. Branagh does a good job embodying all that is evil in the world, but his character is such a stereotype of the cold, rich man that, at times, this representation becomes almost comical. Thankfully, Washington’s and Pattinson’s characters are a bit more compassionate and display slightly more personality. Even though jokes in the film are extremely rare, the pair has a chemistry that reveals a refreshingly playful jargong beneath all the seriousness.

Despite all, Nolan’s film is definitely worth watching. It is hard to not get caught up in its ideas of time inversion and a temporal cold war, and it offers a cinematography that certainly impresses. Moreover, the bromance (if you can call it that) that unfolds between Pattinson and Washington manages to lift the film’s otherwise serious atmosphere and offers a certain counterbalance to the action-filled plot. Unfortunately, the ubiquitous gender stereotypes damage the overall impression. It is frankly disappointing that in 2020, a big film such as Tenet creates a world in which it is up to the men to save humankind. I am hoping (expecting!) Nolan’s next film to avoid being built on such cliché gender stereotypes.