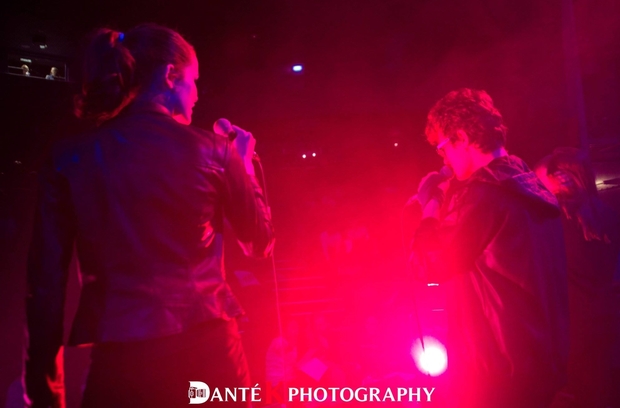 Rhapsody 2018: A Live Music Show took place at the Shaw Theatre across two nights on Friday 23rd and Saturday 24th February. Hosted by UCL Live Music society and UCL Stage Crew, it was the fourth annual show of its kind, in which musicians performed student-written arrangements of contemporary hit songs – and the evening certainly felt live to the core. One moment there was silence on the dimmed stage, bar some shuffling silhouettes, and the next, singers, instruments, strobe lights and smoke. The cast performed a wide range of genres and mash-ups, with music and movement passing from the stage to the stalls.

The 450 seats filled up quickly. The staging was vibrant, with an excellent backdrop painted with help from UCL Art society in neon blues, greens, and pinks. The stage itself held a sleek symmetrical set up, which included a vibraphone that was (unusually) placed centre-stage.

The musicians performed a huge range of songs. Take your pick: from Simon and Garfunkel to MIKA to Nicki Minaj. Rhapsody 2018 gained a lot from its incredibly varied repertoire. The feeling of renewed excitement each time I turned the page of the programme became almost addictive, knowing that each coming number would be a huge hit – but with a twist.

This element of the unknown and experimental provided Rhapsody with its main challenge: how could they possibly bring new life to timeless songs such as Outkast’s ‘Hey Ya’? In fact, Rhapsody’s rendition was proof that indeed this was not an impossible task. The team brought new life to the song, with added saxophones and a third singer, who transformed Outkast into a musical trio (Chris Thomas, Ben Levett Ben Sharon) and brought a playful humour to the performance, dancing around on stage in shades and boxers at one point. Rihanna’s ‘Disturbia’ was also stretched musically, sung by an a cappella choir, alongside the unexpected inclusion of talented beatboxer Björn Franke. Kanye West’s ‘Heartless’, on the other hand, sung as a heartfelt duet, was given a unsettlingly sombre twist.

Although the performers were keen to re-interpret classics, they still managed to keep a sense of what made the original songs so appealing. The violinists’ bow strokes accompanying the medley of Arctic Monkeys songs added a layer of indulgent satin to the sound, with the tiered staging heightening the sense of drama. More compelling, however, was the electric guitar riff in ‘Do I Wanna Know’, as was the distinctly Alex Turner-like lead vocals by Fuat Çakici. By contrast, arranger Ed Bragg’s refined instrumentation in his interpretation of Gnarls Barkley’s ‘Crazy’ included a single tango-infused string quartet which bolstered an already powerful vocal performance from Catrin Harris.

Over 100 musicians were involved in Rhapsody 2018. The sense of community within the cast particularly resonated in their busier medleys and pieces supported by large-scale choirs, which were performed brilliantly and emanated confidence. Recurring faces such as Alessandra Anderson-Lewis and Pilar Izquierdo Bellido played (among other instruments) the vibraphone and cajon in multiple acts, highlighting that Rhapsody 2018 was not the work of stand-alone musical acts, but rather a result of a collaborative and flexible musical process.

However, the interval between each act felt ill-defined and a little messy. This disjointedness was exaggerated by the lack of a common theme between the songs, which made the showcase feel like a series of random covers rather than a singular artistic statement. The Shaw Theatre’s formal seating arrangement also did not foster a lively, carefree, gig-like atmosphere, as one might have hoped.

Despite the venue’s limitations, the gap between audience and performers was bridged by by ticketholders shouting out from the stalls and engaging with the performance. Rhapsody never had to rest solely on the musical abilities of UCL’s students to keep the attention of the audience – it had it from the get go, in woops and cheers, which gave the night a real buzz.

Overall, the effort of everyone involved in Rhapsody 2018 culminated in a thoroughly enjoyable evening of music, where classic songs were given a new lease of life.