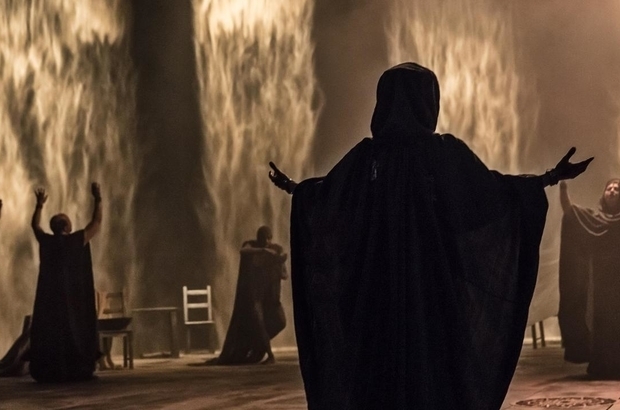 Playing at the National Theatre, Yaël Farber’s Salomé is a production that is, de facto, good. This is theatre at its most extravagant: high budget, well acted, finely produced, bombastically scored and generally technically spectacular. Yet the play stumbles over its own ambition, and is let down by a disjointed narrative. It is perhaps ironic then that the richest parts of Salomé are those that express the subtleties of the power of the heart, and spiritual resilience in the face of adversity.

Farber’s adaptation draws on multiple biblical accounts and is only the most recent in a long line of artistic interpretations that have transformed the tale of the unnamed girl who danced before King Herod. He was so taken by her that John the Baptist’s head was removed in her honour. Set in Judea, the Jews are fighting back against Roman occupation; more and more concessions are made to the imperialists until John rouses the heart of the public, inciting revolution. He is quickly crushed by the oppressors, and sentenced to prison, forced to stay alive to avoid his being martyred. But it is often difficult to understand quite what is going on in this telling. The link between the unnamed girl and John is unclear, and the relentlessly poetic dialogue often makes things more confusing to an audience that, though trying its best, can’t always keep up. Much of the speech is unnecessarily overwritten, such that it gets in the way of understanding rather than providing an indulgently luxurious flourish.

Salomé is most striking in its excellent unpacking of the theme of faith, as seen in the Judeans’ dedication. Farber brilliantly discusses the Jews’ unbreakable will, and poses their spiritual resistance against the physical occupation of their city. There’s a real sense of two mighty cultures clashing – the ancient Judean and the modern Roman – and it’s impressive to watch these characters who are completely consumed by their dedication to their respective traditions.

The scene where King Herod drunkenly cries ‘I’m a whore to Rome’, creates a striking comparison with John the Baptist’s religious devotion, eating only honey and locusts and bathing only in natural waters. Whether or not their masters are the divine or the imperial, Farber shows how far people are willing to sacrifice themselves to further their cause. It is here in this abandonment of self-regard for some higher purpose that Farber manages to capture the transcendental importance of faith. The acting, especially Ramzi Choukair’s as John but also across the board, conveys this excellently, yet it is testament to Farber’s own excellence in writing that the actors can so sincerely and movingly project this faith in a higher cause – though her poeticism can obscure meaning, it certainly carries jarringly powerful emotion.

The production does succeed in its magnificence – the strong, wailing score and rotating stage are undeniably impressive. However the play’s elegance and flow fails in the second half when the narrative starts to oscillate between an older Salomé and a younger one. This confusion means the final visual crescendo doesn’t quite match the emotional impact the production sets itself up to deliver – largely as well because Salomé’s motivations are hidden behind an impenetrable wall of fancy verse. Though the production sometimes becomes so wrapped up in itself that it forgets the audience it’s performing to, Salomé’s positives are undoubtedly of considerable merit, and the awe-inspiring expression of the power of religion makes the production more than worth the tedium of its final scenes.