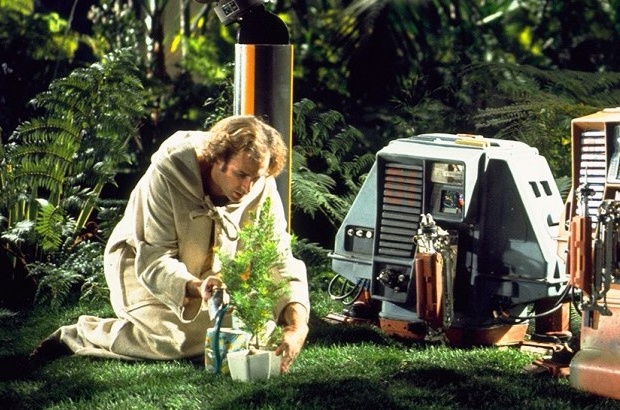 Over the past several months, at one point or another, we have all inevitably been faced with the same moral dilemma: to isolate oneself and endure the resulting sense of loneliness for the greater good … or to not. Freeman Lowell (Bruce Dern) finds himself tackling a similar conundrum in the 1972 sci-fi classic Silent Running.

We meet Lowell in the film’s opening scene as he tends to a flower, through the lens of a close shot, which then promptly pans out, revealing the planets and stars of our galaxy in the background. This stark contrast between the abyssal dark of outer space and the unnaturally well-lit greenery of the lush forest provides the first of many surreal images which pervade the film. Not only are we in a biome, but in one of many that are connected to the large commercial space freighter, ‘Valley Forge’ as it orbits Saturn.

Our protagonist is the resident ecologist, tasked with preserving the last surviving plants and animals of the now defoliated Earth. Lowell is a man who appears blissfully content to live life in his little bubble, so long as there is natural beauty to keep him company. Unfortunately though, we soon find out that the flowers, ferns and fauna are not his only companions. The Edenic sounds of trickling streams and bird song are soon replaced by the screeching of rubber against concrete, as Lowell is interrupted by his three other crew members speeding through the ship on futuristic ATVs. He can do little but watch in dismay as these chariots of modernity tear through his beloved idyll, leaving only the echoes of their riders’ whoops amidst the scattered dirt and trodden plants. It becomes acutely evident that the seeds of discontent within the group have been sowed for quite some time (we are told that they have been on the ship for the last 8 years) despite only now beginning to bear the fruit of open conflict. However, due to the combination of Trumbull’s weak character development and the myopic nature of viewership, the audience is left with a less than sound understanding of why conflict has arisen. Thus, to fully understand and appreciate the film, as well as the relationships between its characters, we must consider the context under which it was released.

The film, made three years before the end of the Vietnam war, was in part an attempt at stoking the rapidly dying embers of America’s hippie counterculture movement, hence its environmental theme. Douglass Trumbull exceeds in capturing the zeitgeist of the era, by presenting ‘Valley Forge’ as a microcosm of America. The long haired, robe-donning, eerily Jesus-like appearance of Lowell is evidently bohemian, contrasting the Nascar red of crewmate John Keenan’s (Cliff Pott) jumpsuit and star spangled hat. The turbulent atmosphere on the ship is not a far cry from the ever-changing political landscape of America during the 1960s and 70s, in which a country full of Freeman Lowells and John Keenans were forced to peacefully coexist. Can a house divided against itself stand?  This question is poignantly answered when a message comes through the intercom: the biomes must be destroyed so the ship can revert to commercial size. Lowell must choose: modernity or beauty? Association or isolation? The people or the plants?

Silent Running was Douglass Trumbull’s debut feature, and without having previously worked as a special effect supervisor for Stanley Kubrick’s 2001: A Space Odyssey, it is unlikely that Trumbull would have got the job. This experience undoubtedly had a large impact on Trumbull and his work on Silent Running, with many of the inexperienced director’s transitionary shots bearing an uncanny resemblance to those of his mentor. One can also observe the cinematic watermarks of Hitchcock amidst flashes of Aldous Huxley’s Brave New World. Aged only 28 at the time and as someone who had little experience of directing, it is unsurprising that Trumbull took inspiration from those who predated him. In turn, he also pioneered many elements of the sci-fi genre  — it would be hard to imagine R2D2 existing in its current form had it not been for Trumbull’s knee-high, anthropomorphic creations.

Ultimately though, it was Trumbull’s philosophical and moral approach to the sci-fi genre which remains comparably refreshing in a field increasingly dominated by exorbitant production budgets producing paradoxically cheap thrills. It seems oddly poetic then, that the film has been blasted into the cosmos of forgotten cinema by an industry intent on remaining at commercial size. Watch this film before it runs silently into oblivion.