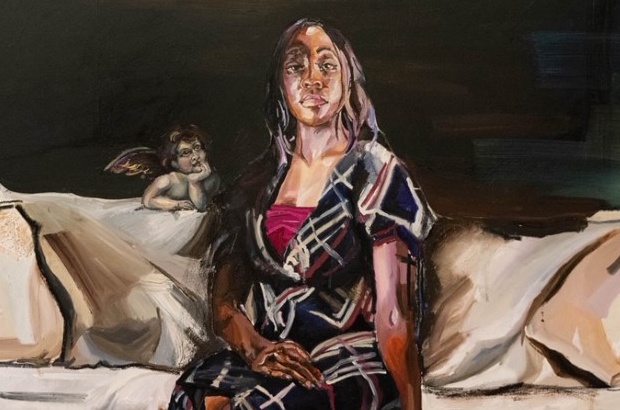 SHAQÚELLE WHYTE is a figurative painter going into his third year at the Slade. His practice can be encapsulated in a singular philosophy: the exploration of the human condition. RUBY ANDERSON interviewed him about his practice.

What sort of work do you typically make?

I’m a painter. My work is based in figuration, and I deal with people, using them like puppets to stage scenes. It’s a lot like theatre, where you have a director. I am the person that is directing everything from inception through to execution. When it comes to the people that are in the paintings, they have been mobilised because I see aspects of myself through them. It is not their stories being told, it’s my stories. But having them on the canvas removes me from being directly in the painting and I find this gives me a bit more freedom to mess around with concepts.

What draws you to paint as a medium? As it is such a traditional fine art medium, do you feel a certain pressure to use it in innovative ways?

There are so many different ways you can manipulate what paint is. There is a texture to paint, there is a something to it. It’s fluid, and can change from one thing to the next, and that’s what I like. It’s not set in any way, and as I am changing, it is changing. When you get over the hierarchy that paint has, paint can be whatever it wants to be. There are still certain people that have this idea of what paint should be, which is surprising because we are all so young, but it can be whatever you want.

I think it is so interesting to use such a traditional medium to highlight modern issues.  It sort of instantly defeats any archaic or outdated associations before they have even been made.

Exactly. To me, it is important to understand what came before you, and to transcribe and change that to adapt its meaning.  That does not necessarily mean using traditional imagery in a traditional sense, but it’s using something as a form of reference in order to then progress forward with the work that you’re making. It is a different way of collecting ideas.

So do you put a lot of emphasis on art-historical understanding within your practice?

I think it is always nice to be introduced to contemporaries and see the exciting things that are going on now. At the moment, I am really into artists such as Andrew Solgado, Michael Armitage, Elly Smallwood, and Tim Okamura. But I also love older stuff, like Titian, Cezanne, Rembrandt, because there is a lineage between how stuff was experienced then and where it has got to now. You can’t learn how to do trigonometry without first knowing how to count. That being said, I don’t hold on to knowing about where art came from in a way that means I can’t make work that is exciting and changed – the point of art being in galleries is that it has been done. I am not looking to recreate that, but you can’t forget that those works are the reason that there are still figurative painters today.

What kind of discussions does your work typically raise?

A lot of discussions about identity come up because I deal so much in figuration. My work is a lot about the psychological, about delving deep. Because of that, there are lots of different ways it can be explored, and that is not really up to me. I will always have my own readings of my works, but once it is done it doesn’t really matter what I think, everybody has their own opinion. And it is the most exciting thing that a work can have those different readings rather than having one singular narrative – that comes from subtlety, which I try to capture in many different ways and am still trying to perfect. But at the same time, it’s never that deep; it’s painting, its meant to be fun, its meant to be enjoyed. It should, of course, be valued, but let’s take it for what it is.

To what extent do you begin creating something with the viewer in mind?

I like the idea of people liking my work. A lot of the time, art is wrapped up in ego, and my work sometimes can be. But at the same time, if I am considering the viewer while making the work, I am making work for people, and I need to make work for myself. That is the only way that my work can sustain its integrity, and the only way I can track my own development. My practice is nothing to do with other people, so I can’t really afford to think of them because it takes away from the process. As a black artist, there is a pressure to make work that coincides with what is going on politically. That is a trap that can succeed for some and not for others. I need to mobilise myself as being Shaqúelle Whyte first. That does not necessarily mean that being a black artist comes second, but it is not the entirety of who I am. People are constantly changing, and there are so many different facets to who I am rather than just one thing. There is an expectation for what I should be serving as a black artist, so I have to be really careful about not serving just that purpose.

How has the Covid-19 lockdown affected your art?

For the first two-thirds of lockdown, I tried to take a break. London was so crazy. Everything suddenly ground to a halt. At first, I was angry about that, but then I began to appreciate the opportunity to take some time out. Some people live for their art, and I do, it is me. But it’s not all of me. I have got so many things that I’m interested in that are far removed from it, so it was good for me to take time to read, time to chill, time to be 20 and not have to take everything so seriously. I have only started making again over the last month, being back in Wolverhampton. What I am making now is more complicated in terms of composition, conception and idea, and I’m not necessarily working with an end goal.

Do you think you have felt the impact of not being in a collaborative studio space?

See, the way that I work is not necessarily super collaborative. I’m self-driven, I’ve always had to be. When you come from a small city or a small town, you might know one other person that is doing the same thing as you. Then suddenly you come to a concentrated place, where everybody is at the top of their game. It means there is no time for you to be relaxing or chilling, in my experience anyway. It’s a competitive atmosphere around who can get into the studio first. And that is something I miss – I miss seeing everyone walk in and instantly focus. However, at the same time, my ability to make work doesn’t come from other people’s ability to make work, it comes from me. So, when I was ready to get back to it during lockdown, I set goals for myself and just got on with it.

Have you drawn inspiration from any unlikely places during lockdown?

I can get inspiration from everywhere. It doesn’t necessarily have to be from: ‘Oh, I saw this painting in the Louvre!’ That definitely does happen of course; you can walk into an exhibition and see a piece of work and something clicks. But, sometimes it’s while watching Emmerdale with your family that something clicks. I’ve found Avatar: The Last Airbender to be really inspiring, actually.